Accessibility links
Tweeting To Electoral Victory In China? In China, an electoral battle is playing out over the Chinese equivalent of Twitter. As local elections take place, some are using this platform to run campaigns as independent candidates. But authorities have harassed some of those political hopefuls. 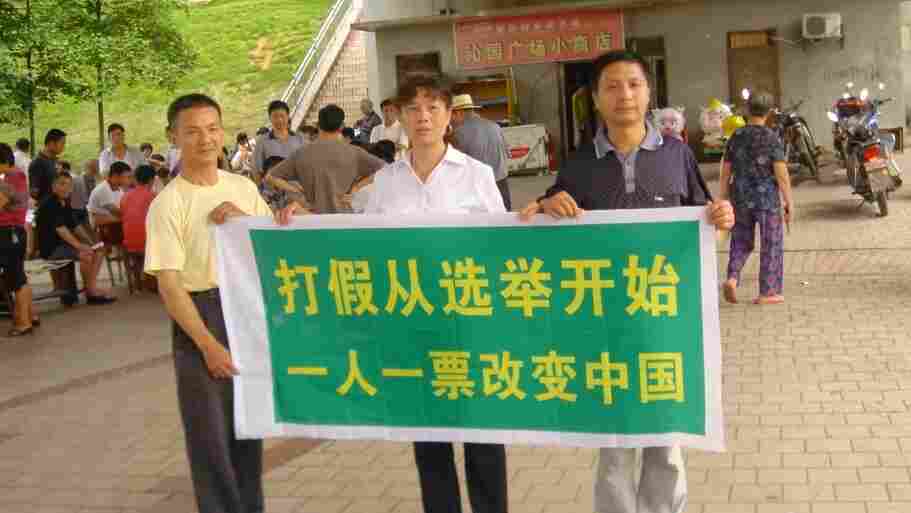 Labor activist Liu Ping (center) has unleashed a wave of candidates in the latest round of local elections. Here, she and two other campaigners hold a banner that declares, "Fighting fake [things] should start with elections. One person, one vote will change China." Courtesy of Liu Ping hide caption

Liu Ping's phone is tapped. She's followed by men in black cars. Her electricity was cut off. And she was detained and held incommunicado in a hotel for four days.

Her crime? Trying to run for election to the local People's Congress in her hometown of Xinyu in China's southeastern Jiangxi province.

Her case has unleashed an electoral battle, which is being played out over Twitter — or, at least, its Chinese equivalent, Weibo. Today, 200 million Chinese are microblogging, and as local elections take place, a record number are using this platform to run campaigns as independent candidates. The official reaction has been swift and — in many cases — forceful. 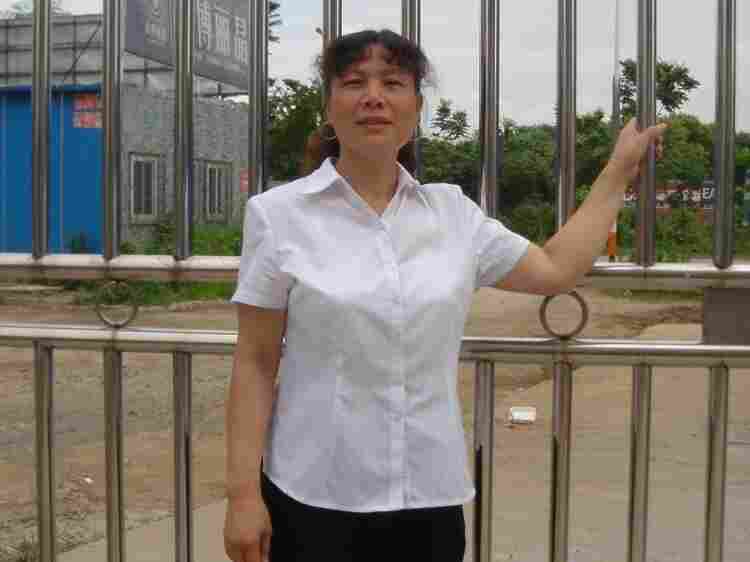 After she tried to run in local elections in her hometown in Jiangxi province, Liu's house was raided, her electricity turned off, and she was detained during the polls. Courtesy of Liu Ping hide caption 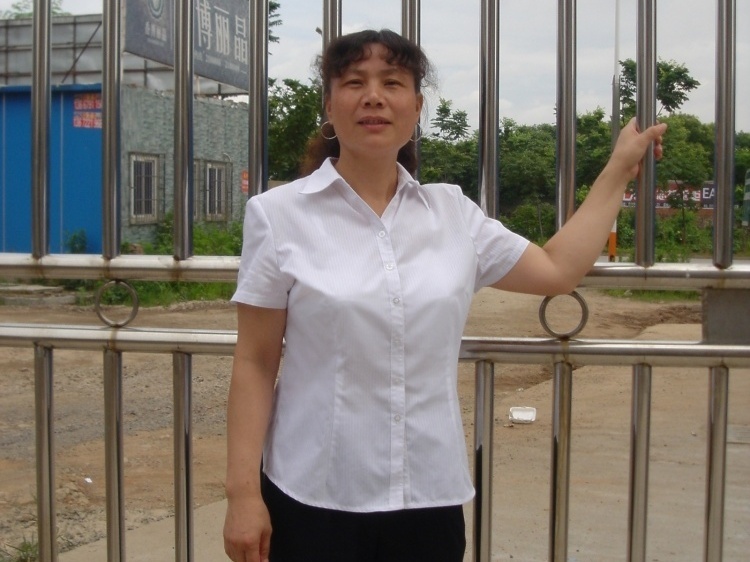 After she tried to run in local elections in her hometown in Jiangxi province, Liu's house was raided, her electricity turned off, and she was detained during the polls.

More than 2 million lawmakers are being chosen at local levels in elections now under way across the nation. These elections take place every five years, and non-Communist Party members are allowed to stand.

But in Liu's case, her record of labor activism, sparked by being laid off after three decades at a state-run steel factory, means the odds may have been stacked against her. At first, no one would even tell her where to pick up the nomination form for days. She did manage to submit one at the last minute, but in vain.

"When the preliminary candidates were announced, my name was illegally kicked off the list," she says ruefully. "They told me, 'It is an election under the leadership of the Communist Party, not an election in the United States.' "

When she went to the local election office in person to ask why she hadn't been allowed to stand, she says she was told, "You want to be a people's deputy? You should be a prostitute." She cried on the way home.

But she still wanted to stand, this time as a write-in candidate. All along, she had been using Weibo to publicize her candidacy and the tactics used against her.

Five days before the election, police turned off her electricity. Two days later, they raided her house. The next day, she says, security officials took her to a hotel, confiscated her phone and held her there until after the poll was over.

Despite failing to stand, she still hasn't given up hope.

"The power of a single person is insignificant because we have been deceived for so long. But if other people dare to stand up, a day will come when we will see hope," Liu says. 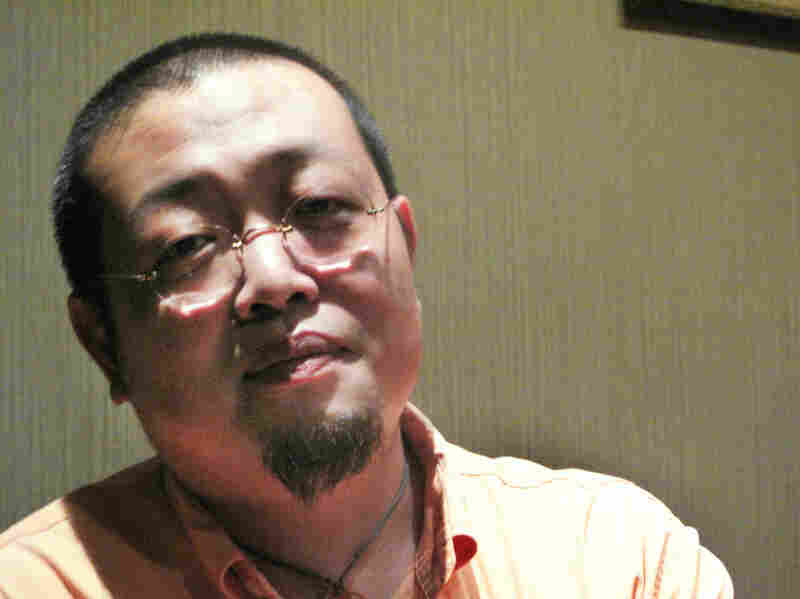 Yao Bo, a well-known microblogger in Beijing, is hoping to run in local elections as an independent. He says he will use his microblog to find people to nominate him, and to get others to help with his campaign. Louisa Lim/NPR hide caption 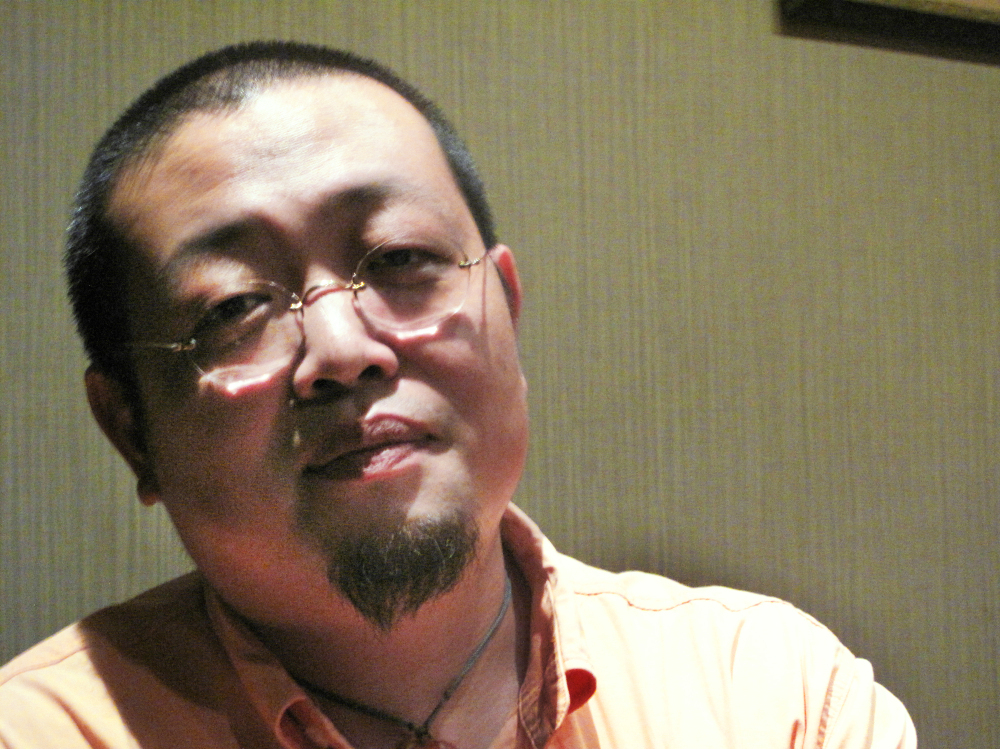 Yao Bo, a well-known microblogger in Beijing, is hoping to run in local elections as an independent. He says he will use his microblog to find people to nominate him, and to get others to help with his campaign.

Her experience unleashed a wave of candidacies, with more than 100 people announcing campaigns on Weibo. Xu Yan, a candidate from the eastern city of Hangzhou, is even uploading campaign videos online.

But he too, like many others, is using the relative freedom of Weibo to document the harassment he has suffered. In his case, he quit his job after his employer was put under pressure by the tax, commercial and labor bureaus. Each candidate needs 10 nominations to stand in these elections, and many report that their nominators have been placed under pressure.

Liu Ping is not the only unsuccessful candidate so far. In Panyu, in southern China's Guangdong province, the founder of a grass-roots foundation, Liang Shuxin, also failed to make it on the ballot sheets after local authorities announced new guidelines only permitting female, non-Communist Party members to stand for election.

He is male and a Communist Party member, and although the restriction was removed the following day, he was not on the preliminary candidate list.

There have been signals the government will not tolerate candidates outside its control. One unnamed official told the state mouthpiece, the People's Daily, that there was no such phenomenon as an "independent candidate," as these are not recognized by law.

I am announcing here that if anybody gives trouble to my nominators, I'll ask them to make recordings of it and upload it. If they want to play dirty in the dark, I'll let them see ultraviolet rays.

Yao Bo, in a message on his Weibo account about his potential political campaign

Yao Bo, for one, is undeterred. He's a writer, better known by his Weibo handle, Wuyuesanren. He wants to change the system from within.

"The process of democratizing China needs to take one step forward," he says, arguing that China's system of local assemblies is, in essence, not that different from a Western parliamentary system. "We do not want a revolution again, so there must be something that can replace revolution."

Yao says he feels protected by the 237,000 followers of his microblog. He sees the microblog as a soapbox, and a way of sourcing campaign help.

He's hoping to stand in Beijing, where he believes the authorities have to play by the rules, and so far, he hasn't been harassed. He's already warned what action he'll take if he is, writing on his microblog: "I am announcing here that if anybody gives trouble to my nominators, I'll ask them to make recordings of it and upload it. If they want to play dirty in the dark, I'll let them see ultraviolet rays."

'A Single Spark Can Start A Prairie Fire'

Elsewhere, several candidates have already been disqualified for various reasons, and others have pulled out before the polls, under pressure.

Sheng Hong, a liberal intellectual from the Unirule Institute of Economics, who has been involved in independent election campaigns since the 1980s, describes the electoral trend as "regressive." He fears that the way local authorities are disregarding their own electoral regulations to disqualify candidates is part of a larger trend, signaling that the central government has lost control of local authorities.

"This is an extremely serious problem now, which I call the collapse of constitutionalism," he says. "Local officials are increasingly lacking in restraint; they abuse their powers and violate citizens' rights, and the central government seems to do nothing to restrain them."

Nonetheless, the woman who sparked this, Liu Ping, believes that in her case, the strategy of crushing her candidacy has backfired.

"They failed, and they failed badly. Excluding me from the election worked in my favor. A single spark can start a prairie fire, and the more they persecute me, the more resistance there will be," she says.

Local election timetables vary around the country, with polls set to run until the end of the year. But as yet, none of the Weibo candidates has been elected. The experience of past independent candidates shows that even if they were to be elected, their real impact on policymaking would be limited.

But the fact that their fate is a hot topic online shows a growing thirst for public participation in politics, and any government suppression of that will come at its own peril.