Accessibility links
Al Gore's '24 Hours' On Climate Change Former Vice President Al Gore's 2006 documentary An Inconvenient Truth helped raise awareness around the issue of climate change. Gore returns in the lead up to the 2012 election with 24 Hours of Reality, a new project designed to "broadcast the reality of the climate crisis." 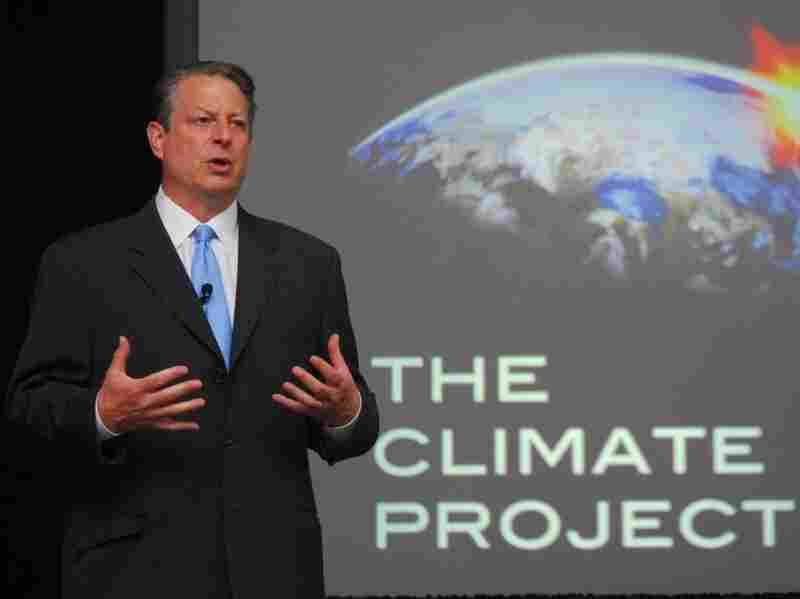 Former Vice President Al Gore trains a group of presenters for the 24 Hours of Reality project. The online program will stream live online from 24 locations worldwide.

Courtesy of the Climate Reality Project

Former Vice President Al Gore has spent much of the last decade on advocacy for environmental issues. He won an Oscar for his 2006 documentary An Inconvenient Truth. In 2007, he received the Nobel Peace Prize along with the Intergovernmental Panel on Climate Change.

In the years since An Inconvenient Truth, polls show the American public has become increasingly skeptical about whether humans are the cause of rising global temperatures. Gore hopes that the overwhelming scientific consensus around climate change will help convince skeptics that it is prudent to respond.

"If 98 doctors told you you had a heart condition that required you to make some changes and two doctors say, 'Don't worry about it,' ... hopefully you'd go with the 98," Gore tells NPR's Neal Conan. "That's the condition we're in now."

Gore also argues that many companies and individuals are making positive changes, purely on economic grounds. "There are a great many people and businesses that don't care to engage in discussion or debate about climate science who are going ahead right now to become more efficient — cut their emissions, cut their costs — and in the process they're becoming more profitable, most often."

The former vice president is also hopeful that there will come a time when what he considers the sheer evidence of climate change, like extreme weather events, will help penetrate resistance. "I saw this as a child growing up ... in the American South during the civil rights revolution," he says, "where individuals who were so resistant [to] eliminating the laws justifying discrimination did actually change when they really looked deeply into their own hearts and confronted the reality of the situation."

Climate scientists themselves have often not helped their own cause, Gore concedes. While he lauds skilled science communicators like the late Carl Sagan and Bill Nye "The Science Guy," "by and large, scientists often do not feel comfortable playing that role ... many of them are not comfortable in the political process of conducting a political dialogue," he says. "The more engaging and charismatic and personable scientists can get involved in telling the world about what they are finding, the better."