Accessibility links
'The Lion King' In 3-D: All Part Of The Corporate Circle Of Life Andrew Lapin considers the 3-D rerelease of Disney's The Lion King and concludes that there's still a beating heart under all the fuss, but forcing 3-D technology on a film never meant to include it does nothing to enhance the viewing experience.

'The Lion King' In 3-D: All Part Of The Corporate Circle Of Life

'The Lion King' In 3-D: All Part Of The Corporate Circle Of Life 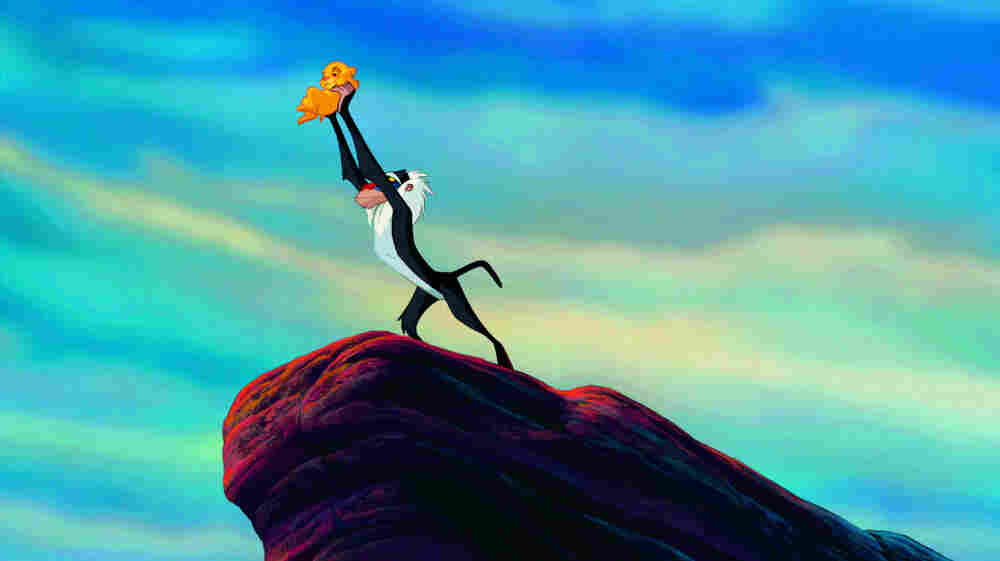 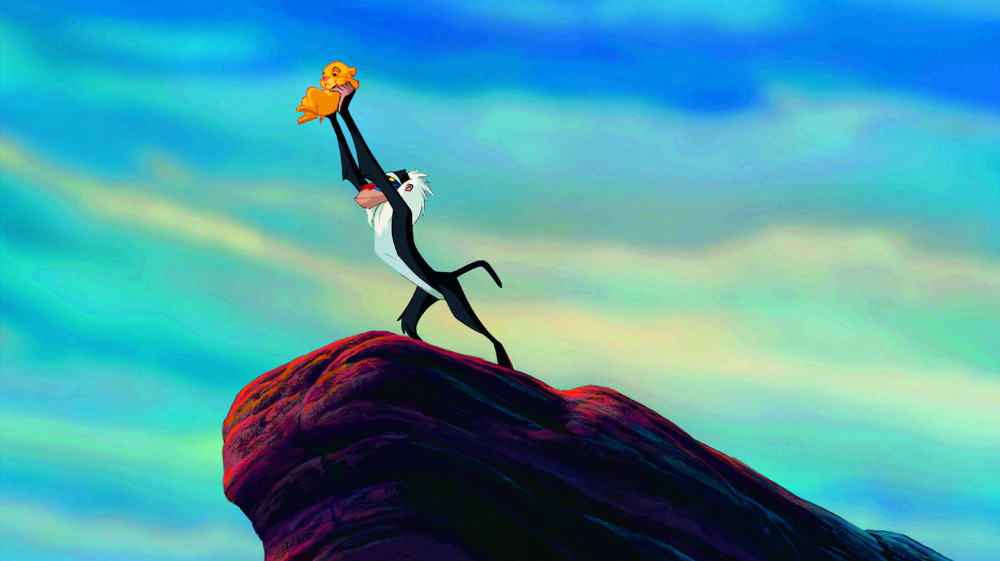 Simba is presented by Rafiki in Disney's The Lion King.

In the cash grab, the shameless cash grab
The lion sleeps tonight...

This Friday, Disney will release their seminal 1994 animated film, The Lion King, into theaters for what seems like the upteenth time (actually the third). The draw this go-around? What else but 3-D, which will awkwardly retrofit the original gorgeous, hand-drawn animation, finally allowing viewers everywhere to experience the completely artificial viewing sensation they've been clamoring for. (Suggested tagline: "See it the way it was never meant to be seen!")

But if you squint through your glasses at the 16-year-old film, you'll still see something marvelous: a product, every detail coldly calibrated for maximum profit, that nevertheless retains a wonderfully beating heart, soaring emotion and problem-free philosophy.

The Lion King was a movie-by-committee, designed with the sole purpose of recreating the box office glory and merchandising moolah of the studio's previous second-wave animation hits The Little Mermaid, Beauty And The Beast and Aladdin. You could make the case for pretty much every other Mouse House movie being just as calculated, and I'd listen to you, but it seems to particularly apply to King. The film's screenplay lists 29 credited writers, more than any other late-period Disney movie except Mulan (which had 31). For the first time, the producers hired a name-brand songwriting talent, Elton John, over studio stalwart Alan Menken. And the movie's got tons of instantly marketable characters, from the Laurel-and-Hardy-esque Timon and Pumbaa to wise old kook Rafiki to the maniacal hyena pack. Come on, I can't have been the only one bummed to pull boring ol' Simba out of my Happy Meal as a kid.

But you don't think about the studio system when you're watching The Lion King, because somehow, miraculously, every bit of the film feels like organic and blissful storytelling. Even though he makes for a lame toy, Simba's journey to find his proper place in a perilous world is a universal one, and our desire to see him prevail over the treacherous Scar and reclaim his kingdom propels the movie's soul and spirit. And King takes some pretty amazing risks considering just how many people (the writers, the two directors or the extremely hands-on then-studio-head Jeffrey Katzenberg) could have stepped in to turn the film into something safe and bland: The first 50 seconds are sung entirely in Zulu, after all.

Then there's Mufasa's death scene, which even today is an incredibly harrowing sequence for a family film — there had to have been someone on Disney's executive board at some point who thought it was too sad to include, and yet here it remains.

(Secretly I just enjoy making NPR readers cry. Bet you forgot about the part where Simba tries to nestle himself underneath his dead father's arm.)

In fact, the 3-D Disney tacked onto this re-release (and remember, it's still "tacked on" even if they took years perfecting it, by virtue of the simple fact that it was never meant to be there) is the most corporate-smelling aspect of the entire Lion King franchise to date. Julie Taymor's Broadway musical is an object of artistic wonder in its own right. Even the direct-to-video sequel is slimy, yet satisfying (though I can't speak as to the quality of the more recent half-quel, as its release postdated the period of my life where I could sit through a direct-to-video Disney movie).

Honestly, if Disney had just put the original in theaters again with no bells or whistles, like they used to do every seven years with all their animated properties before the days of home video, I'd be on board. In 2002, the studio prepared an IMAX release of the film, essentially the same movie re-scoped for a larger screen without any drop in quality. But according to my colleague Bob Mondello, the new 3-D version doesn't add depth so much as re-separate the layering of film cels the animators used to create depth in the first place. Sure, the essentials of the story are there for you to relive, but why bother doing so for more money and worse quality in the theaters instead of just on video?

Besides, the film's most genuinely special effects — the timeless message, the wonderful songs, James Earl Jones' majestic voice work — have nothing to do with how you watch it. The Great Kings Of The Past never needed 3-D in their lives, so it's about time the wonderful world of Disney executives realized the same thing before it's too late to save their other modern classics from the same fate.