Accessibility links
New Planet Orbits Two Stars NASA's Kepler mission has found a new solar system where a Saturn-like planet spins around twin stars 200 light-years away from us. It's the first direct observation of such an arrangement, and astronomers say they're not sure why the planet is there. 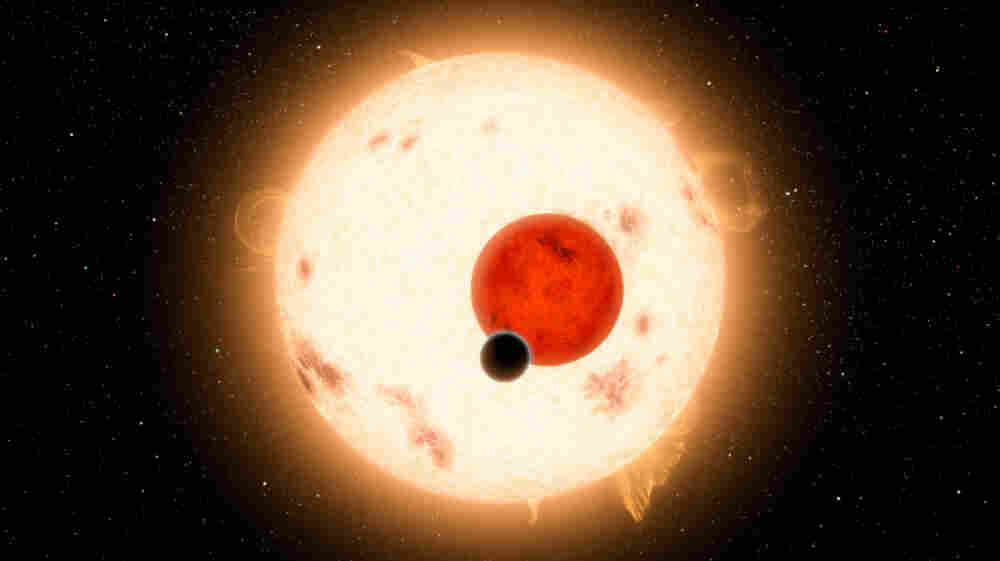 NASA's Kepler mission has discovered a planet that circles two stars instead of one. The planet, shown as the black dot in this artist's illustration, is similar to Saturn, though it is more dense and travels in a 229-day circular orbit around its two stars. R. Hurt/NASA/JPL-Caltech hide caption

A trillion is a huge number — when you're talking dollars or euros. But a trillion miles is not so much in the cosmic scheme of things. Astronomers say they've now found a planet that orbits two suns a mere thousand trillion miles from here. It's yet another example of a weird solar system being discovered around nearby stars.

Two years ago, NASA launched the Kepler observatory to look for Earth-like planets beyond our own solar system. It has found more than 1,000 apparent planets around distant suns.

Out For A Spin

This animation shows the Kepler-16 system from an overhead view. The two stars in the center twirl around each other every 41 days while the planet, shown as the small white dot, makes a full circle around the stars every 229 days.
(Note: This video has no sound.)

Now, for the first time, it has found a planet in orbit around a double star. Laurance Doyle from the SETI Institute in California says these twin stars are 200 light-years away from us in the constellation Cygnus, and each one has a slightly different hue.

"You have an orange star that's 69 percent the mass of the sun, and it is basically dancing with a 20-percent-the-mass-of-the-sun red star," he says. "And they go around each other every 41 days."

Doyle and his many collaborators looked closely at this system and watched as the stars temporarily dimmed with a predictable pattern — a sure sign that a planet was passing in front of them. Astronomers had previously seen strong hints of planets around twin stars, but this is the first direct observation, according to their report in Science.

The planet, named Kepler-16b, orbits in a big circle every 229 days. It's a frozen world, about the size of Saturn, and it's likely a ball of gas with a rocky interior. But Doyle imagines the sunsets would be dramatic.

More dramatic to astronomers is that they can learn a lot about the stars and the planet as they dance around one another. The junior star in this system, for example, is the smallest normal star ever discovered, Doyle says. And the bigger star is outright perplexing.

"It rotates slowly, which indicates it's old, but it has large starspot activity, which is an indicator of youth," he says. "So the whole place is a giant laboratory."

One of the biggest conundrums is understanding the very existence of planets around twin stars, "because they shouldn't be there," says Dave Charbonneau, a professor of astronomy at Harvard University. He says the standard story is that planets form from a pancake-shaped disk of material that's left over after a singleton star coalesces.

"When you have a binary star — two stars that orbit each other — that pancake of material could be easily disrupted. And so we have a harder time actually figuring out how to make a planet so that it can be born and stably orbit two stars," Charbonneau says.

A New Horizon Of Twin Stars

Charbonneau was not involved with this particular discovery, but he says it shows clearly that planets can form around binaries. That opens up a whole new horizon in the search for planets because most stars are actually born as twins.

"So actually the sun is somewhat of a rarity from that perspective," he says. "Now what we want to know is: Do most binary stars have planets just like we now think that most single stars do? And I think the future data from the NASA Kepler mission is going to help sort that out."

In fact, Doyle estimates there are 2 million solar systems around twin stars in our galaxy. He's been hunting for them for 20 years, and all of a sudden, the Kepler observatory has made his quest so much easier. "Now that we know how to find them, I think within the next few months we're going to find a few more," he says. "It's a gift, you know. After 20 years, the universe finally said, 'Try this one.' "