Accessibility links
Fashion Week: Bold Surprises On And Off The Runway Since last Thursday, top designers have been showcasing their Spring 2012 collections in N.Y. Pulitzer Prize-winning style writer Robin Givhan has been on the scene, seeing vibrant colors and bold prints dominating the runway. In the audience, American Vogue chief Anna Wintour was sitting with rapper Nicki Minaj. Givhan also talks about the smashing success of Missoni's limited edition Target line.

Since last Thursday, top designers have been showcasing their Spring 2012 collections in N.Y. Pulitzer Prize-winning style writer Robin Givhan has been on the scene, seeing vibrant colors and bold prints dominating the runway. In the audience, American Vogue chief Anna Wintour was sitting with rapper Nicki Minaj. Givhan also talks about the smashing success of Missoni's limited edition Target line. 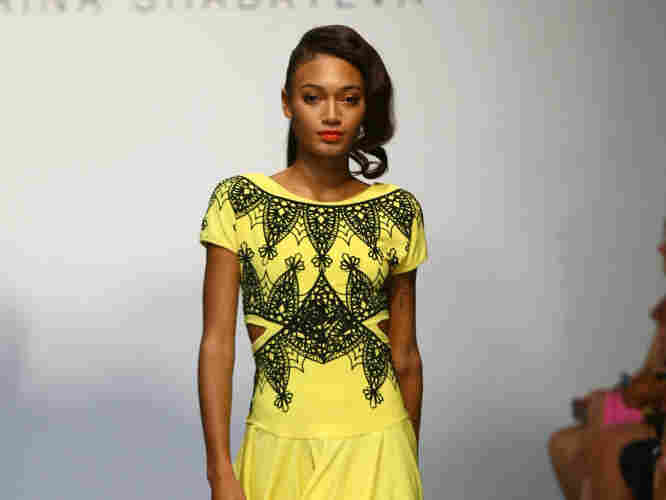 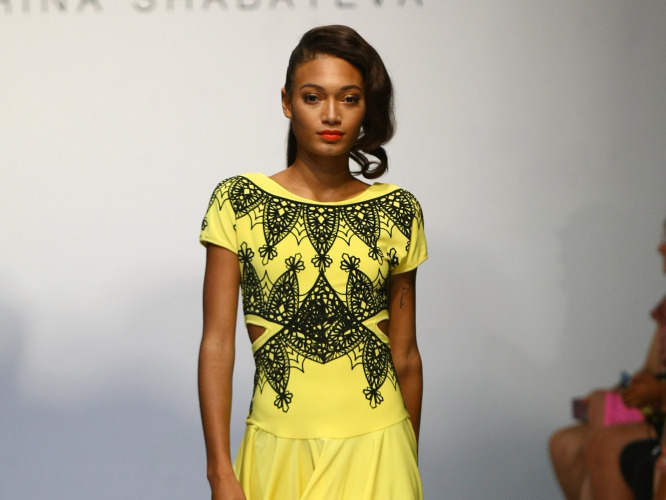 A model walks the runway at the Irina Shabayeva Spring 2012 fashion show during Mercedes-Benz Fashion Week at Audi Forum on September 14, 2011 in New York City.

MICHEL MARTIN, host: I'm Michel Martin and this is TELL ME MORE from NPR News. In a moment, the Latin Grammy awards are coming up. We' will find out what's hot and popping in the world of Spanish and Portuguese language song. Please stay with us for that. But first to a subject that's just as entertaining and competitive: Fashion Week. Top designers have been showing off their spring 2012 collections at the Mercedes-Benz Fashion Week in New York.

We're talking about Michael Kors, Tracy Reese, Vera Wang, Mark Jacobs, so many more. The event is huge for designers seeking to influence our image in the months ahead. Fashion Week is just wrapping up so we've called on someone who's taken it all in. Robin Givhan is a special correspondent for style and culture at Newsweek and The Daily Beast. Welcome back. So good to talk to you once again.

ROBIN GIVHAN: It's great to be here.

MARTIN: So first, before we get into the shows, we were reminded that Fashion Week had just started off when 9/11 happened.

MARTIN: And we've been thinking about and observing the 10th anniversary of 9/11. I did want to ask whether that affected the mood in the atmosphere in any way.

GIVHAN: You know, in many ways, a lot of the news recently in fashion has been about this new generation of designers and one of the sort of ironic things is that that generation really sort of coalesced because of 9/11. Their shows were canceled and the industry sort of banded together to give them a place to show those collections as a group.

But just for the shows that were on that day, certainly there were acknowledgements. So, I mean, it was very much on the minds of the people who were presenting their collections and I think they were trying to be both respectful but also move forward.

MARTIN: Speaking of moving forward, now to the trends.

MARTIN: What caught your eye?

GIVHAN: There is so much color on the runway, so much bold print and pattern. It's like blossoms of flowers and it's just extraordinarily cheerful.

GIVHAN: Well, it wouldn't be Fashion Week unless there were. I've seen very much like that. One of the most curious shows I will say was from Donna Karan. She is an incredibly talented designer. She was inspired this time by Africa, but her interest in Haiti where she's been extremely involved in philanthropy.

But, you know, sometimes when designers sort of go off to far-flung lands, they tend to come back with more cliches than inspiration. There were definitely moments when you sort of thought really do I need this much mud cloth in my life? I don't think so.

MARTIN: Okay. But overall though, are the clothes things that lots of people could imagine wearing as opposed to just like three people?

GIVHAN: I think there's a lot there for a wide variety of people and the reason I say that is because there's a lot of sort of slouchiness and comfort that's really being injected into the clothes and they're pretty.

GIVHAN: In the mix?

MARTIN: In the mix.

GIVHAN: I would say just inject a little bit of color into that black, the camel, the white, the gray. And I think people will just sort of be in a better mood doing it.

MARTIN: Okay. Speaking of intense bursts color, one thing that

GIVHAN: That was a good segue.

MARTIN: One of the headlines for the things that turned heads, or I should say people who turned heads but were not actually on the runway, rapper Nicki Minaj was spotted sitting with Anna Wintour who is, she's basically like the queen, right? The editor-in-chief of American Vogue.

MARTIN: They attended two shows together, one by Carolina Herrera and one by Oscar de la Renta. They are like the ones, you know, the people that dressed the Kennedys and people like that. And Nicki Minaj, for people who aren't familiar with her very unique style, we're talking like Marie Antoinette wigs. We're talking like she had this one shirt that looked like it was made of puff balls or something.

GIVHAN: Yeah, it's a cartoon and there's a long history in fashion of Anna Wintour being very savvy about recognizing who these young players are, because she really sees where popular culture is going.

MARTIN: We're talking about Fashion Week. It's wrapping up in New York. We're joined by Robin Givhan. She's the special correspondent for style and culture for Newsweek and The Daily Beast and a Pulitzer Prize winner. I just thought I'd mention that. One of the most anticipated events of the week was the launch of Missoni's limited edition line for Target - Missoni being the Italian knitwear designer and manufacturer.

Do I have this right that Target's website actually shut down and that actually some of the stores, the entire delivery was sold out in like 20 minutes?

GIVHAN: The website did crash. And in New York, before the merchandise made it to the website and was filtered out into the stores, there was a pop-up store. It was scheduled to be open for three days. It was open for approximately six hours before all the merchandise sold out.

GIVHAN: Target is known for doing these limited edition designer collaborations and none of them have had the kind of buzz that this has. Missoni is all about color, print and those just vibrant, zigzag patterns and you can take that idea and translate it from a t-shirt to a patio umbrella. And the moment is also right for that because, as I was saying, it's a moment of color and pattern and it's one of those names that's been around for such a long time, it's out there in the culture and it's really accessible.

MARTIN: And finally, before I let you go, I wanted to talk about an article that you wrote that appeared in this month's issue of Essence Magazine.

MARTIN: And you talked about the - that there's, in fact, a very small number of black designers

MARTIN: who are considered top names. So is it that the dial hasn't moved at all or that it's, in fact, worse?

GIVHAN: I don't think that they've necessarily gotten worse. I think what's happened is that the industry has grown exponentially. And so at a time when, you know, the names like Patrick Kelly and Willi Smith, you know, were out there, the industry was much smaller. What's happened though is that there are so few black students going to design school and so they're just not in the pipeline.

MARTIN: Why do you think that is?

GIVHAN: You know, the reasons are sort of complex. I mean, one of the most surprising was that both students and, you know, folks who work in admissions talked about the fact that a lot of black students who are sort of academically able, their parents do not steer them to design school, to creative professions. In fact, they steer them away.

And then the third thing that was quite interesting was just simply that the decline in arts education in public schools. And when you don't have arts-literate teachers in high school, you don't have people saying, hey, this hobby could actually be a career.

MARTIN: But what do you think is lost. I guess the question I have is why should people care?

MARTIN: Robin Givhan is a special correspondent for style and culture for Newsweek and The Daily Beast. She also penned an article for this month's Essence Magazine about the state of blacks in design. She was kind enough to join us from our bureau in New York. Robin Givhan, thank you so much for joining us.