Accessibility links
In Israel, A Growing Sense Of Isolation Israel has never had many friends in the Middle East, and now it is facing serious problems with traditional partners like Turkey and Egypt. A Palestinian bid for statehood at the U.N. next week is expected to add to Israel's sense of isolation in the region. 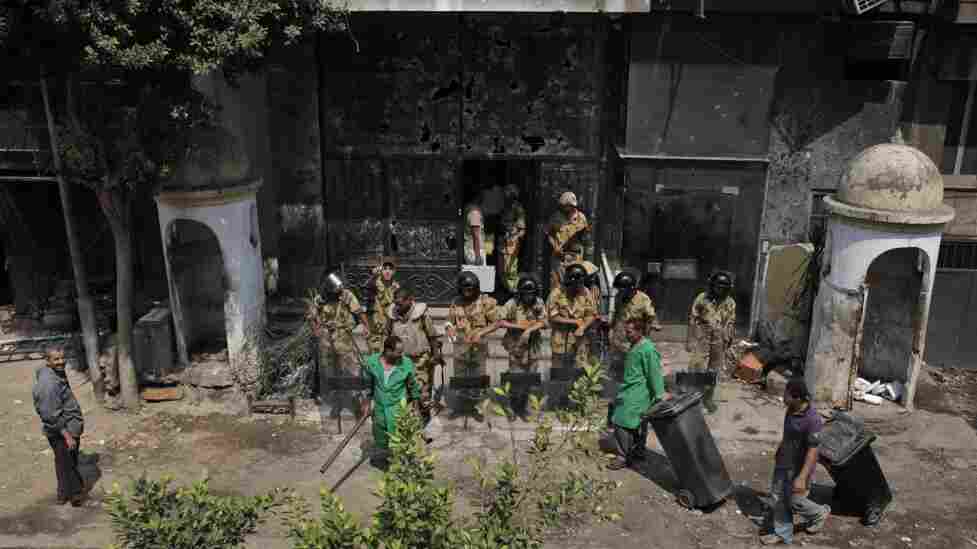 Egyptian soldiers guard the badly damaged entrance of the Israeli Embassy in Cairo on Sunday. Protesters stormed the embassy, contributing to the worst diplomatic crisis between the two countries since they signed a peace treaty in 1979. Nasser Nasser/AP hide caption 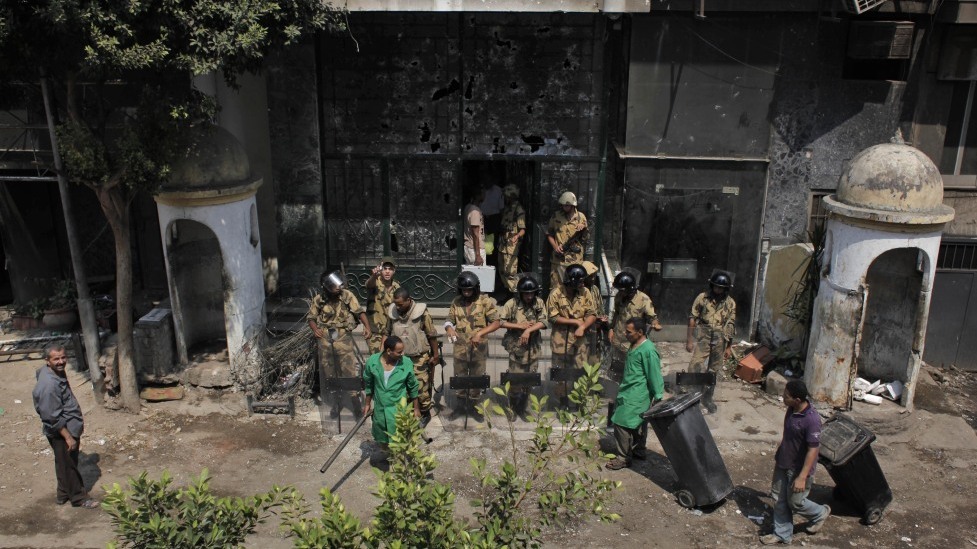 Egyptian soldiers guard the badly damaged entrance of the Israeli Embassy in Cairo on Sunday. Protesters stormed the embassy, contributing to the worst diplomatic crisis between the two countries since they signed a peace treaty in 1979.

Turkish leader Recep Tayyip Erdogan would seem to be an unlikely icon for the Palestinians. Yet he is all the rage these days in the Palestinian territories. His picture is everywhere, even in places you would never expect it.

"All your receipts, all your notepads, everything has the picture of Erdogan," says Abdul Rahman Marra, a grocery store owner in the West Bank.

Marra then gestures to the posters of Erdogan on the walls. The Turkish leader stood up to Israel and defended Palestinian rights, Marra says, calling Erdogan the best leader in the Muslim world.

The scene couldn't be more different in Israel's business center of Tel Aviv.

The restaurant called Istanbul, which serves Turkish food, is empty, even though it is lunchtime. Owner Adi Mann says people have stopped coming since the friction with Turkey began. Israelis are showing their patriotism by boycotting his food, Mann says.

Israel has always lived in a tough neighborhood, but now it's a lonely one as well.

Israel's trouble with Turkey began last year when Israeli commandos killed nine Turkish citizens on a ship that was part of a flotilla trying to break Israel's sea blockade of the Gaza Strip. Israel has refused to apologize, and earlier this month, Turkey expelled the Israeli ambassador.

Turkey is just one of the diplomatic issues confronting Israel these days.

In Egypt, a mob ransacked the Israeli Embassy in Cairo last week, forcing Israel's ambassador and staff to be evacuated and brought home.

Israel And Its Neighbors

The Arab uprisings have been accompanied by increased anti-Israeli sentiment in the Middle East. Israel's relations with its neighbors have become increasingly strained. Here is a partial list:

TURKEY: Turkey expelled the Israeli ambassador and cut military ties after Israel refused to apologize for a deadly commando raid on a Turkish aid flotilla bound for the Gaza Strip last year.

PALESTINIANS: The Palestinians plan to seek statehood at the United Nations next week, a move strongly opposed by the U.S. and Israel, who say a state of Palestine should be created through negotiations.

In 1979, Egypt became the first Arab country to sign a peace treaty with Israel. But some Egyptians want to reassess the relationship after Egypt's revolution in February. A major blow came last month, when Israeli security forces, responding to an attack by militants in southern Israel, killed members of the Egyptian security forces along the border between the two countries.

"The whole region is rejecting us. It's like a body rejecting a transplant," says Alon Liel, a former Israeli diplomat and an expert on Turkey.

Many Factors At Work

Liel says there are a number of factors at play. The Arab uprisings have given the Arab public a voice, and they are using it. And what many of them are saying is that they are angry at the continued Israeli occupation of Arab territory.

Also, Turkey is trying to increase its stature in the region by playing on those sentiments.

In addition, there has been no real peace process between the Israelis and the Palestinians. The Palestinians say they will go to the United Nations next week and seek to be recognized as a state. Even if the Palestinians succeed, the move is expected to be mostly symbolic. But it is causing a great deal of consternation in Israel as countries in the region and around the world rally to the Palestinian cause.

"Everything is challenging — the situation, the changes," says Yitzak Levanon, Israel's ambassador to Egypt. He's now back in Tel Aviv since his embassy was attacked last week. "We have to bear in mind [that] after the revolution we are witnessing the emergence of a new Egypt, something completely different than before, and this by itself is extremely challenging."

He says it's not just Egypt, but the entire region that's in flux.

"Nobody knows at this stage what will be the configuration of the future Middle East," he says.

Back at Istanbul restaurant in Tel Aviv, owner Adi Mann is betting that things won't be getting better anytime soon. In hopes of luring customers back, he's going to change the name of his restaurant and the menu.