Accessibility links
Texas Fire Evacuees Return To Find Only Ashes Like thousands of other people here whose homes were incinerated by a wildfire in Bastrop County, Texas, Linda and Roger Ward are living in a daze. The fire was not the deadliest wildfire or the largest in acreage. But in terms of destruction — 1,554 homes and counting — it is one of the worst forest fires in recent U.S. history. 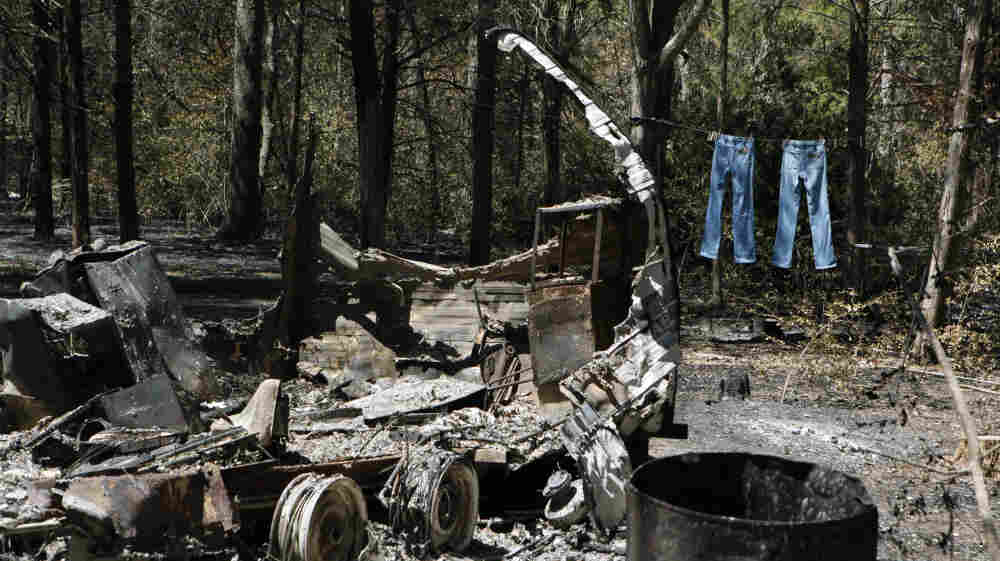 Jeans hang on a clothesline next to a burned down trailer home in Bastrop, Texas. A wildfire raging for nearly two weeks has blackened 50 square miles and destroyed more than 1,500 homes. Erich Schlegel /AFP/Getty Images hide caption 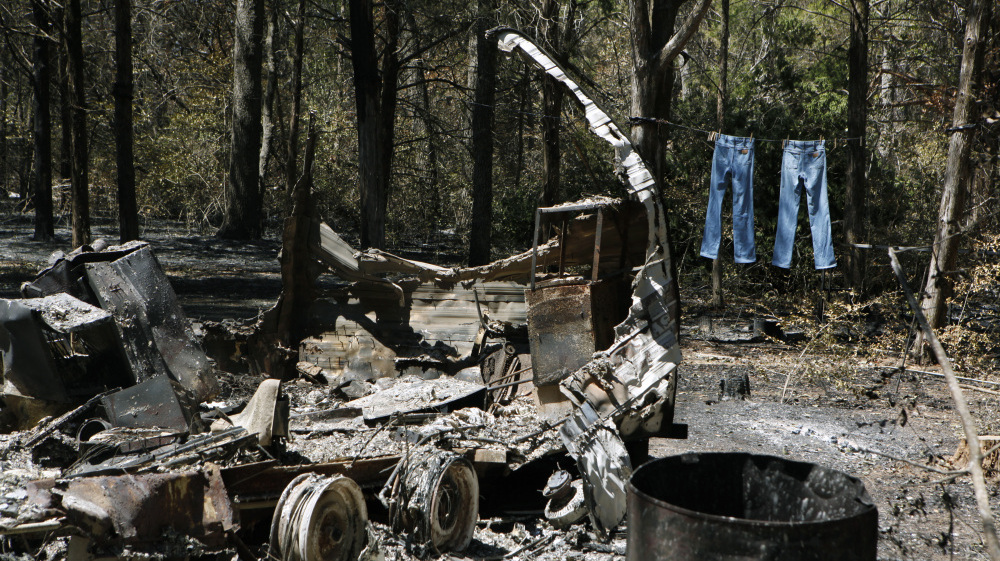 Jeans hang on a clothesline next to a burned down trailer home in Bastrop, Texas. A wildfire raging for nearly two weeks has blackened 50 square miles and destroyed more than 1,500 homes.

For 17 years, Linda and Roger Ward lived in their two-story dream house in a subdivision in Bastrop County, southeast of Austin, Texas. They loved to sit on their back deck and listen to the wind in the pines.

On the afternoon of Sunday, Sept. 4, everything changed.

"I used to sit in the living room and decide which pictures on the wall — that was my primary thing, important papers and pictures — I was gonna get out," Linda Ward says. "And it happened so fast I didn't even have a chance to go out and do it. The fireman said, 'Evacuate right now.' So we grabbed the dogs, and we left."

The retired couple is staying in an Austin hotel, courtesy of the Federal Emergency Management Agency. On Wednesday, they drove back to the ashen remains of their house. The fire took it all, including Roger Ward's shop, his pickup, a VW bug, an RV and their son's 18-wheeler.

Like thousands of other people here whose material lives were incinerated, the Wards are living in a daze.

"Basically, I think you either have an inner strength or you don't," Linda Ward says.

A few miles away, Todd McClanahan surveys a landscape that looks like the post-apocalyptic desolation from Cormac McCarthy's The Road.

About 95 percent of the rolling pine forest of the popular Bastrop State Park is gone. 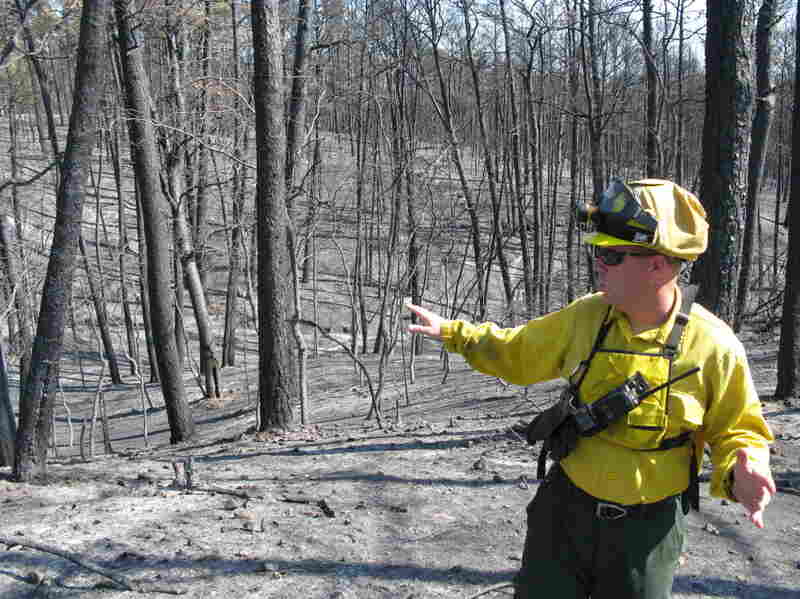 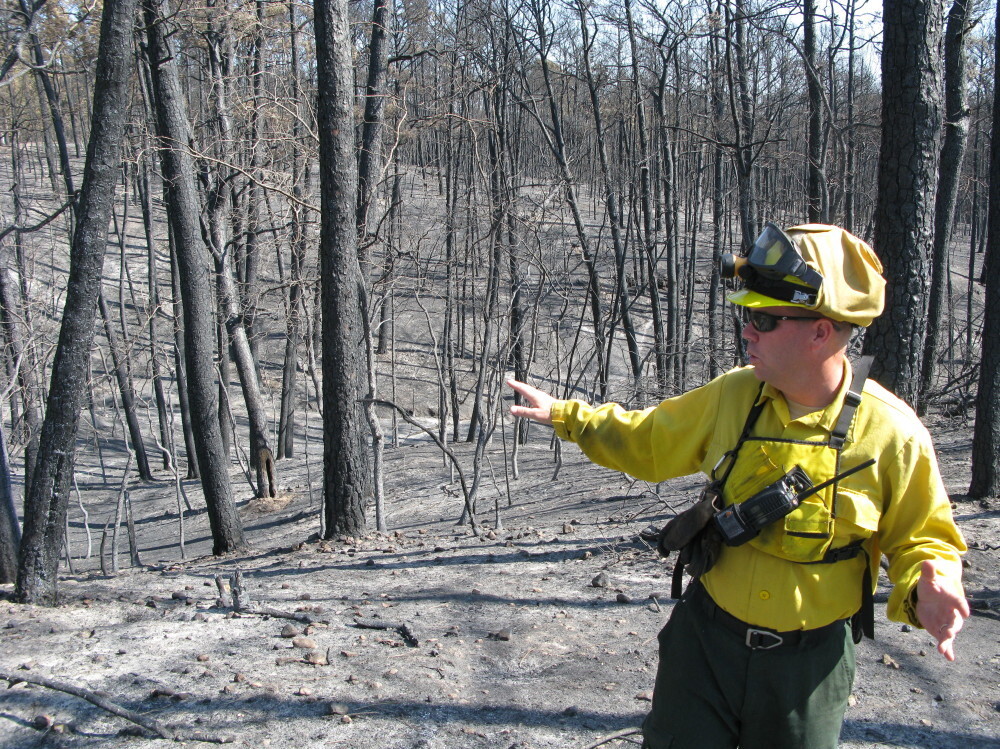 "It hurts," says McClanahan, the park superintendent, as he stands in a forest of scorched loblolly pine trunks.

Fire crews were able to save the park's handsome stone buildings built in the 1930s by the Civilian Conservation Corps. But the sad fact is that McClanahan is now superintendent of a wasteland.

McClanahan says he doesn't think prescribed burns would have made a difference because of the size of the fire.

"I'm hearing reports this is one of the worst wildfires in the state's history," he says, "and the devastation is ranking up there in some of the top in the nation's."

The Bastrop fire was not the deadliest wildfire or the largest in acreage. But in terms of destruction — 1,554 homes and counting — it is one of the worst forest fires in recent U.S. history.

Authorities still don't know what started it. In these conditions, it could have been anything. Texas just experienced the hottest summer of any state since the U.S. government began keeping records in 1895. Nearly the whole state is a matchbox.

Just in the past seven days, the Texas Forest Service reports, its exhausted wildfire crews have responded to, on average, 20 new fires every day.

If there's any good news in any of this — and you have to look for it — it's the incredible outpouring of help.

So many donations are pouring into Bastrop from around the state that you can drive around town and see piles and piles of free stuff left in parking lots and front lawns for whomever needs it.

More On The Wildfires

Texas Wildfires Rage On With More Than 1,000 Homes Destroyed

Tiffany and Billy Roberts' front yard looks like a giant garage sale, and it's all free.

"We've got clothing in any size, books, toys, toiletries, groceries, pet items, got air conditioners," says Tiffany Roberts, "a little of everything."

The people of the nearby city of San Marcos sent three truckloads of donations to Bastrop. The official shelter sites already had so many donated goods, they turned the trucks away. So they off-loaded here at the Roberts property.

"We're not accepting anymore donations at this time because we can't handle what we have," Tiffany Roberts says.

And there's one other piece of potentially good news: There's a 20 percent chance of rain this weekend in the Bastrop area.