Accessibility links
The Nation: The Power And Possibilities of Food Shrimp from Thailand, tomatoes from Holland, coffee from Costa Rica — the impact of our choices in the supermarket rings around the world. The Nation's Frances Moore Lappe evaluates what the current trends in food mean for our small planet.

The Nation: The Power And Possibilities of Food

The Nation: The Power And Possibilities of Food

Read More About Food In The Global Marketplace 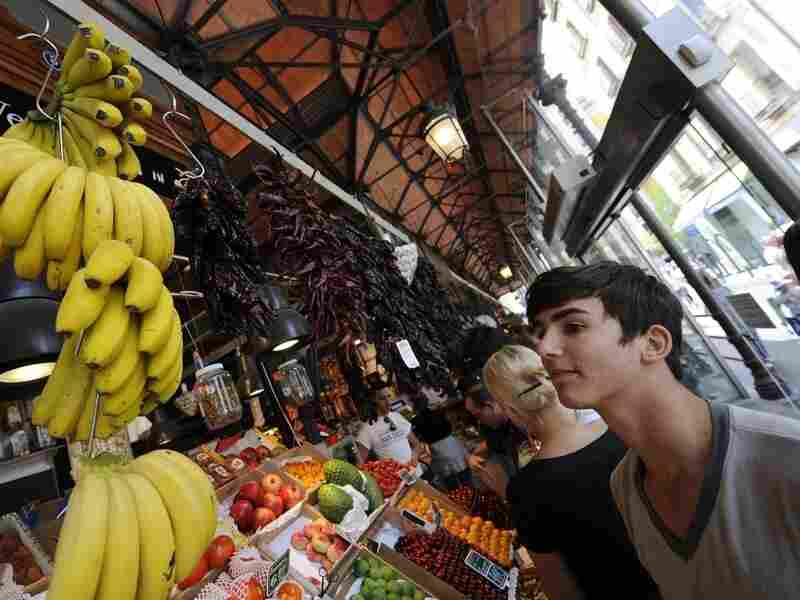 A bunch of bananas hang from a stall at San Miguel market on June 3, 2011 in Madrid, Spain. Denis Doyle/AFP/Getty Images hide caption 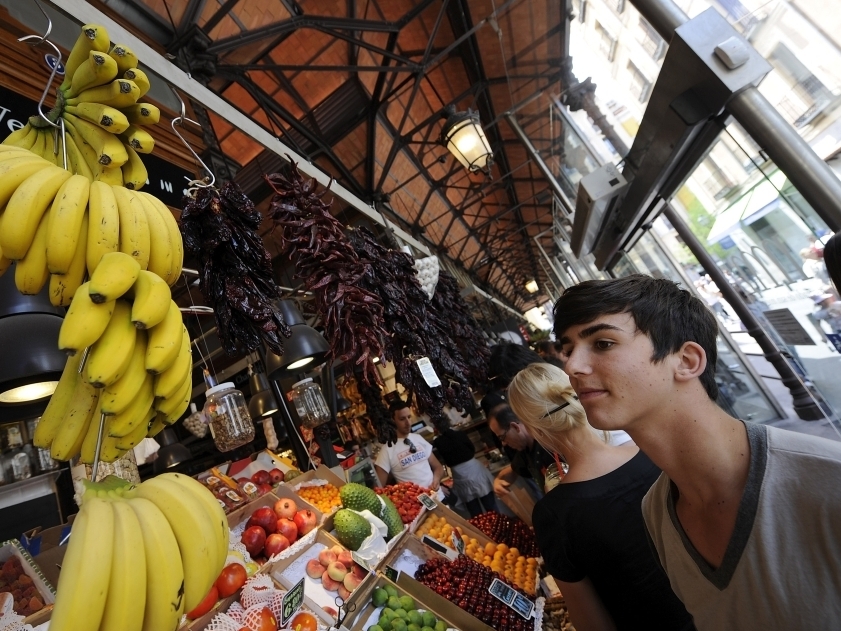 A bunch of bananas hang from a stall at San Miguel market on June 3, 2011 in Madrid, Spain.

Frances Moore Lappe just released EcoMind: Changing the Way We Think to Create the World We Want (Nation Books) on the fortieth anniversary of her Diet for a Small Planet.

For years I've been asked, "Since you wrote Diet for a Small Planet in 1971, have things gotten better or worse?" Hoping I don't sound glib, my response is always the same: "Both."

As food growers, sellers and eaters, we're moving in two directions at once.

The number of hungry people has soared to nearly 1 billion, despite strong global harvests. And for even more people, sustenance has become a health hazard—with the US diet implicated in four out of our top ten deadly diseases. Power over soil, seeds and food sales is ever more tightly held, and farmland in the global South is being snatched away from indigenous people by speculators set to profit on climbing food prices. Just four companies control at least three-quarters of international grain trade; and in the United States, by 2000, just ten corporations—with boards totaling only 138 people—had come to account for half of US food and beverage sales. Conditions for American farmworkers remain so horrific that seven Florida growers have been convicted of slavery involving more than 1,000 workers. Life expectancy of US farmworkers is forty-nine years.

That's one current. It's antidemocratic and deadly.

There is, however, another current, which is democratizing power and aligning farming with nature's genius. Many call it simply "the global food movement." In the United States it's building on the courage of truth tellers from Upton Sinclair to Rachel Carson, and worldwide it has been gaining energy and breadth for at least four decades.

Some Americans see the food movement as "nice" but peripheral—a middle-class preoccupation with farmers' markets, community gardens and healthy school lunches. But no, I'll argue here. It is at heart revolutionary, with some of the world's poorest people in the lead, from Florida farmworkers to Indian villagers. It has the potential to transform not just the way we eat but the way we understand our world, including ourselves. And that vast power is just beginning to erupt.

In a farmworker camp in Ohio, a young mother sat on her bed. She was dying of cancer, but with no bitterness she asked me a simple question: "We provide people food—why don't they respect our work?" That was 1984. She had no protection from pesticides, or even the right to safe drinking water in the field.

Twenty-five years later, in Immokalee, Florida, I walked through a grungy, sweltering 300-foot trailer, home to eight tomato pickers, but what struck me most was a sense of possibility in the workers themselves.

They are among the 4,000 mainly Latino, Mayan Indian and Haitian members of the Coalition of Immokalee Workers, formed in 1993—more than two decades after Cesar Chavez's United Farm Workers' victorious five-year grape strike and national boycott. In the 1990s, CIW's struggle over five years, including a 230-mile walk and hunger strike, achieved the first industrywide pay increase in twenty years. Still, it only brought real wages back to pre-1980 levels. So in 2001, CIW launched its Campaign for Fair Food. Dogged organizing forced four huge fast-food companies—McDonald's, Taco Bell, Burger King and Subway—to agree to pay a penny more per pound and adhere to a code of conduct protecting workers. Four large food-service providers, including Sodexo, were also brought on board. Beginning this fall, CIW will start implementing these changes at 90 percent of Florida tomato farms—improving the lives of 30,000 tomato pickers. Now the campaign is focused on supermarkets such as Trader Joe's, Stop & Shop and Giant.

In Brazil, almost 400,000 farmworker families have not only found their voices but gained access to land, joining the roughly half-billion small farms worldwide that produce 70 percent of the world's food.

So what happened in Brazil?

With the end of dictatorship in 1984 came the birth of arguably the largest social movement in the hemisphere: the Landless Workers Movement, known by its Portuguese acronym MST. Less than 4 percent of Brazil's landowners control about half the land, often gained illegally. MST's goal is land reform, and in 1988 Brazil's new Constitution gave the movement legal grounding: Article 5 states that "property shall fulfill its social function," and Article 184 affirms the government's power to "expropriate...for purposes of agrarian reform, rural property" that fails to meet this requirement. Well-organized occupations of unused land, under the cover of night, had been MST's early tactic; after 1988 the same approach helped compel the government to uphold the Constitution.

Because of the courage of these landless workers, a million people are building new lives on roughly 35 million acres, creating several thousand farming communities with schools serving 150,000 kids, along with hundreds of cooperative and other enterprises.

And in the United States? The largest 9 percent of farms produce more than 60 percent of output. But small farmers still control more than half our farmland, and the growing market for healthy fresh food has helped smallholders grow: their numbers went up by 18,467 between 2002 and 2007. To support them, last winter the Community Food Security Coalition held community "listening sessions," attended by 700 people, to sharpen citizen goals for the 2012 farm bill.

Just as dramatic is the struggle for the seed. More than 1,000 independent seed companies were swallowed up by multinationals in the past four decades, so today just three—Monsanto, DuPont and Syngenta—control about half the proprietary seed market worldwide.

Fueling the consolidation were three Supreme Court rulings since 1980—including one in 2002, with an opinion written by former Monsanto attorney Clarence Thomas—making it possible to patent life forms, including seeds. And in 1992 the Food and Drug Administration released its policy on genetically modified organisms, claiming that "the agency is not aware of any information showing that [GMO] foods...differ from other foods in any meaningful or uniform way."

The government's green light fueled the rapid spread of GMOs and monopolies—so now most US corn and soybeans are GMO, with genes patented largely by one company: Monsanto. The FDA position helped make GMOs' spread so invisible that most Americans still don't believe they've ever eaten them—even though the grocery industry says they could be in 75 percent of processed food.

Even fewer Americans are aware that in 1999 attorney Steven Druker reported that in 40,000 pages of FDA files secured via a lawsuit, he found "memorandum after memorandum contain[ing] warnings about the unique hazards of genetically engineered food," including the possibility that they could contain "unexpected toxins, carcinogens or allergens."

Yet at the same time, public education campaigns have succeeded in confining almost 80 percent of GMO planting to just three countries: the United States, Brazil and Argentina. In more than two dozen countries and in the European Union they've helped pass mandatory GMO labeling. Even China requires it.

In Europe, the anti-GMO tipping point came in 1999. Jeffrey Smith, author of Seeds of Deception, expects that the same shift will happen here, as more Americans than ever actively oppose GMOs. This year the "non-GMO" label is the third-fastest-growing new health claim on food packaging. Smith is also encouraged that milk products produced with the genetically modified drug rBGH "have been kicked out of Wal-Mart, Starbucks, Yoplait, Dannon, and most American dairies."

Around the world, millions are saying no to seed patenting as well. In homes and village seed banks, small farmers and gardeners are saving, sharing and protecting tens of thousands of seed varieties.

In the United States, the Seed Savers Exchange in Decorah, Iowa, estimates that since 1975 members have shared roughly a million samples of rare garden seeds.

In the Indian state of Andhra Pradesh—known as the pesticide capital of the world—a women-led village movement, the Deccan Development Society, puts seed-saving at the heart of its work. After the crushing failure of GMO cotton and ill health linked to pesticides, the movement has helped 125 villages convert to more nutritious, traditional crop mixes, feeding 50,000 people.

On a larger scale, Vandana Shiva's organization, Navdanya, has helped to free 500,000 farmers from chemical dependency and to save indigenous seeds—the group's learning and research center protects 3,000 varieties of rice, plus other crops.