Accessibility links
Anonymous Comes Out In The Open The cyberguerrilla group known for high-profile computer attacks on corporate and government targets is asking followers to put down their keyboards this weekend for a flesh-and-blood protest on Wall Street. But turning "hacktivism" to activism may prove difficult. 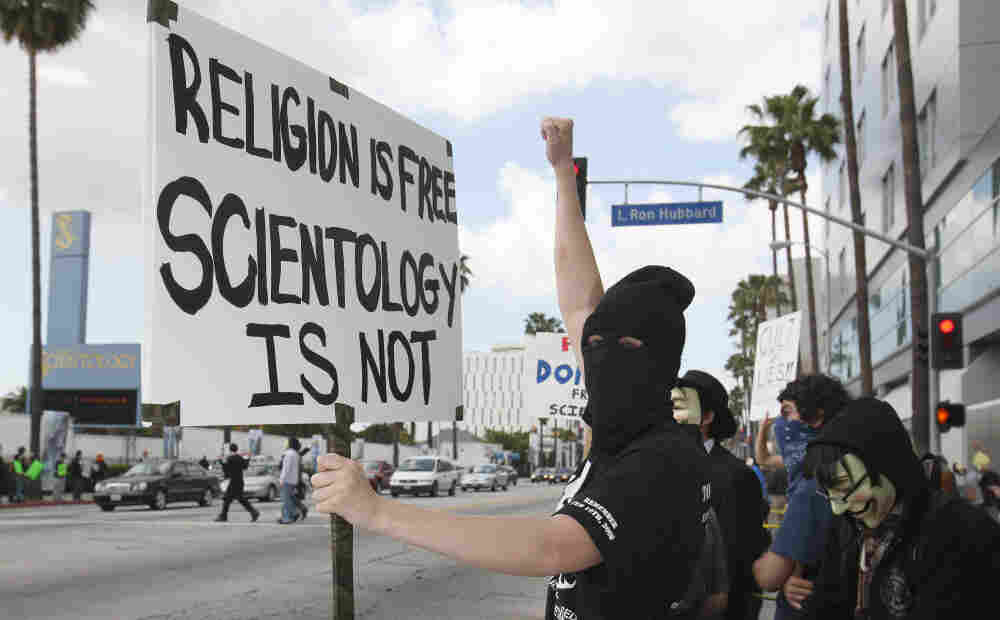 Disguised members of the "hacktivist" group called Anonymous took to the streets of Los Angeles in March 2008 to protest near buildings associated with the Church of Scientology. Similar demonstrations were held in cities mainly in the U.S. and Europe. Chris Weeks/AP hide caption 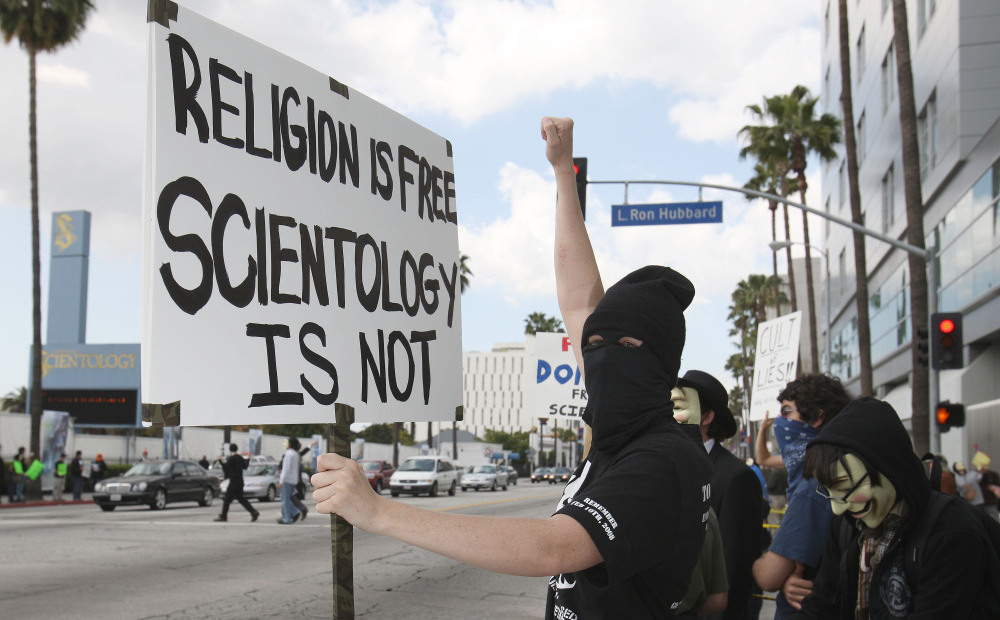 Disguised members of the "hacktivist" group called Anonymous took to the streets of Los Angeles in March 2008 to protest near buildings associated with the Church of Scientology. Similar demonstrations were held in cities mainly in the U.S. and Europe.

"Hacktivists" are hitting the streets.

The cyberguerrilla group Anonymous — known for high-profile computer attacks on corporate and government targets — is urging its followers to come out from behind their PCs on Saturday and occupy Wall Street.

The aim: an Arab Spring-style protest over the "abuse and corruption of corporations, banks and governments."

It's not the first time the loose-knit group, which coalesced in 2003, has shifted from online hacktivism to offline activism. In 2008, it staged small street protests mostly in the U.S. and Europe against the Church of Scientology. Last month, masked "Anons," as they are known, jammed San Francisco train stations after the Bay Area Rapid Transit blocked cellphone service to stop an anti-police protest. 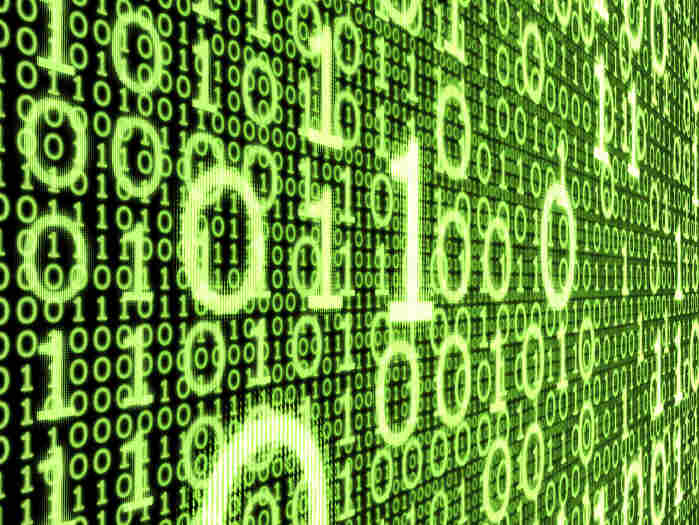 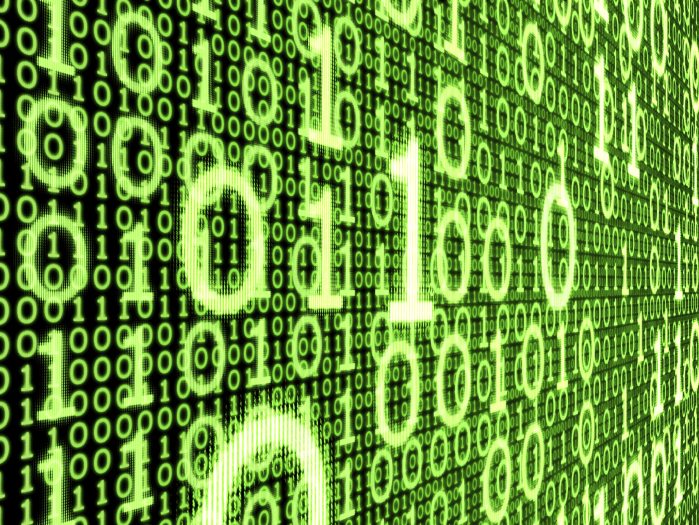 Illegal revenge attacks on computer networks are becoming less difficult, thanks to the easy availability of website-crippling tools.

But so far it's the group's online hacking that has gotten the most public attention. Operation Payback, for example, delivered punishing "distributed denial of service" attacks on PayPal, Amazon, Visa and MasterCard last year after the companies refused to process donations to WikiLeaks.

A Twist On Tradition

The rise of groups of geeks and hackers organized — however loosely — around a political agenda is a fairly new phenomenon, experts say. And combining such activism with more traditional forms of protest is perhaps a natural evolution.

"One of the big errors of our time is believing that what happens online is separate from what happens offline," says Paul Levinson, author of New New Media and professor of communications and media studies at Fordham University in New York.

He says there's a long tradition of disrupting the activities of the establishment to make a point, and that Anonymous is drawing on that tradition on multiple fronts.

What Anonymous has done by joining its online and offline presence comes out of the flash-mob craze that started in 2003, says Virag Molnar, a sociology professor at the New School for Liberal Arts in New York.

"We've seen a huge evolution in the purposes that flash mobs have been used," she says. "Some can be used for progressive purposes, but they can also be used for rioting, hooliganism or gang activity."

Flash mobs set up via Twitter and Facebook have appeared at BP gas stations to demonstrate against the company's handling of the Gulf oil spill. In Switzerland, Greenpeace organized a flash mob in which more than 100 people pretended to drop dead to protest nuclear power.

Social media tools also were linked to riots this summer in Vancouver and across Britain.

Anonymous claimed responsibility last month for hacking into some 70 law enforcement websites, garnering "a massive amount of confidential information," including emails and credit card numbers. The move was in retaliation for the FBI arrest of 16 suspects for their alleged involvement in the PayPal denial of service attack.

Gabriella Coleman, a professor of media, culture and communications at New York University, says Anonymous at first used Internet forums to organize, and has since expanded its reach through social media sites.

A Brief History Of Anonymous Attacks 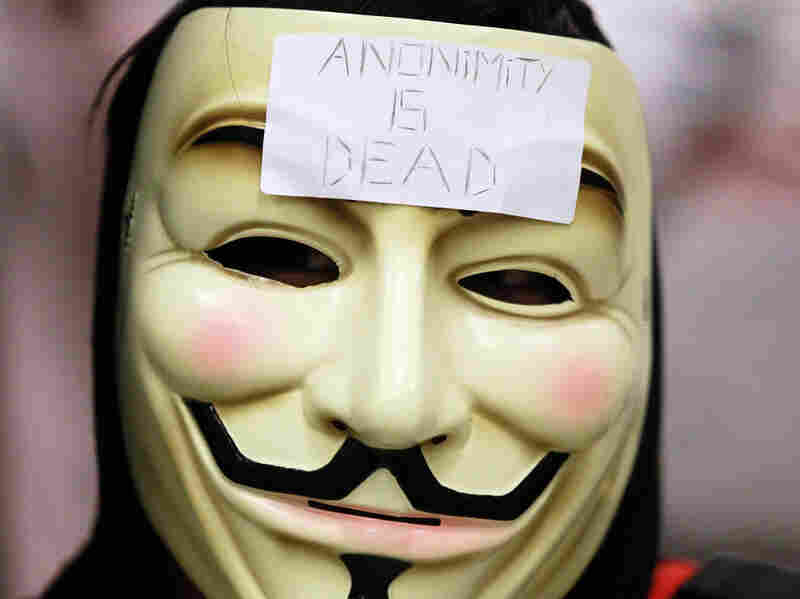 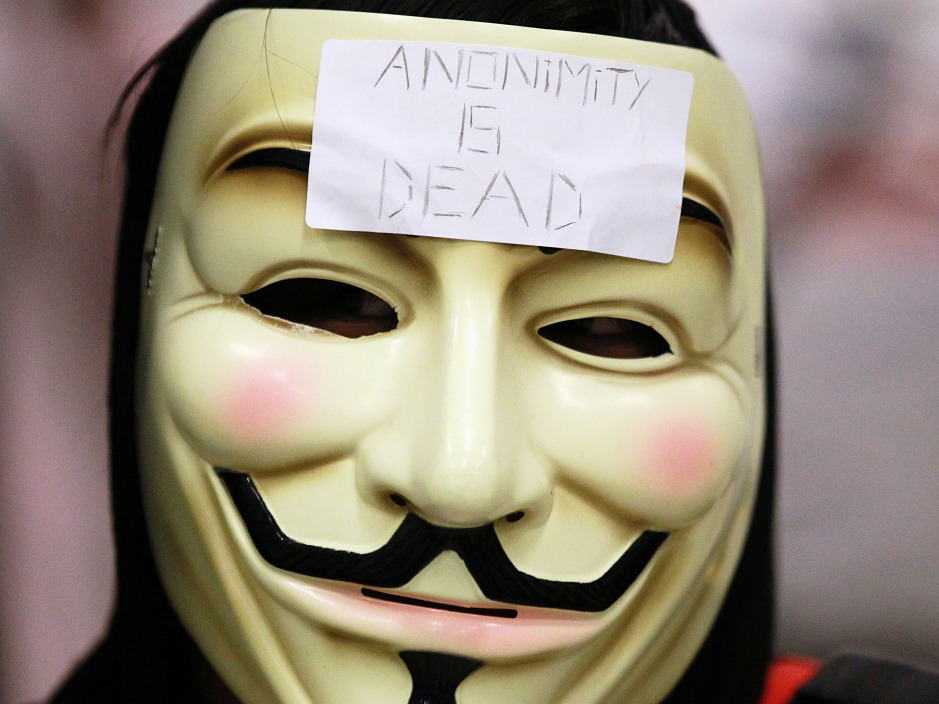 2003: Anonymous originates on Internet forums such as 4chan and Internet Relay Chat as a loosely affiliated group of hackers with little or no defined social agenda.

2006: The loosely organized collective carries out some of its first major acts of online mayhem, including a distributed denial of service [DDoS] attack that disables the website of radio host Hal Turner, known for racially charged remarks.

2008: Anonymous launches Project Chanology in retaliation for the Church of Scientology's demand that YouTube remove a church video interview of actor and Scientologist Tom Cruise. In addition to launching DDoS attacks against Scientology websites, followers wearing masks of Guy Fawkes turn out for street protests at church centers mostly in the U.S. and Europe.

2009: Following the Iranian presidential election, with its widespread accusations of vote-rigging, Anonymous launches a website supporting the Iranian Green Party with the aim of skirting official censorship.

The group launches Operation Payback in support of WikiLeaks and its embattled chief, Julian Assange. Denial of service attacks hit the websites of PayPal, MasterCard, Visa and Amazon.

2011: Anonymous launches various operations in support of the Arab Spring, including denial of service attacks and hacks against government websites in Tunisia, Egypt, Bahrain, Jordon and Morocco.

It has also spawned splinter groups such as Lulz Security (recently disbanded) and the Anti-Security Movement (still active) that have gone on to launch their own hacktivist attacks.

As the group's name suggests, anonymity — particularly the kind that can be found in cyberspace — is important to many of its followers. Giving it up doesn't come lightly. Members typically show up at protests sporting a mask in the likeness of the 16th century English radical Guy Fawkes.

Many Anons are in their 20s and 30s, but a few are in their 60s — the "grandfathers" of the movement, says Coleman, who is writing a book on Anonymous.

"There is a sort of across-the-board free-speech sensibility that many Anons share, which many geeks and hackers share," she says. "The libertarian label, though, ends at, 'We believe in free speech.' "

While free speech and anti-censorship is a key part of the group's ideology, there's also a definite leftist and anti-capitalist strain in some Anons. "Beyond that," she says, "it's a pretty diverse lot."

Mark Rasch, who led the Justice Department's computer crime efforts for eight years, says Twitter, Facebook and other social networking sites have "created this online community that didn't exist before."

Now, he says, "a relatively small group of people can do a lot of damage to a large and sophisticated organization."

"Why protest [in public] and risk getting caught if I can do it from my living room?" says Rasch, who is now director of cybersecurity and privacy at the Falls Church, Va.-based consulting firm CSC. And Levinson points out that "it's easy to do things online; it's hard to get people into the same physical space for a protest."

Molnar of the New School acknowledges that online activists tend to be less cohesive than social protesters in the past, who typically met face to face and knew more about one another.

"The threshold for participation is much lower because of the nature of the new technology," Molnar says. "You do not have to be integrated into a closely knit network or even a formal organization, so these organizations tend to be much looser, much more diffuse, and they often mobilize a lot of strangers that are not strongly involved in the movement itself, unlike the student movements in the 1960s."

"I think the bigger challenge is to keep these people engaged over the long run," she says.

Online activist groups may disintegrate more easily, but Molnar says that "in particularly important moments, they might be able to make a bigger splash than a formal organization that has a much longer shelf life."