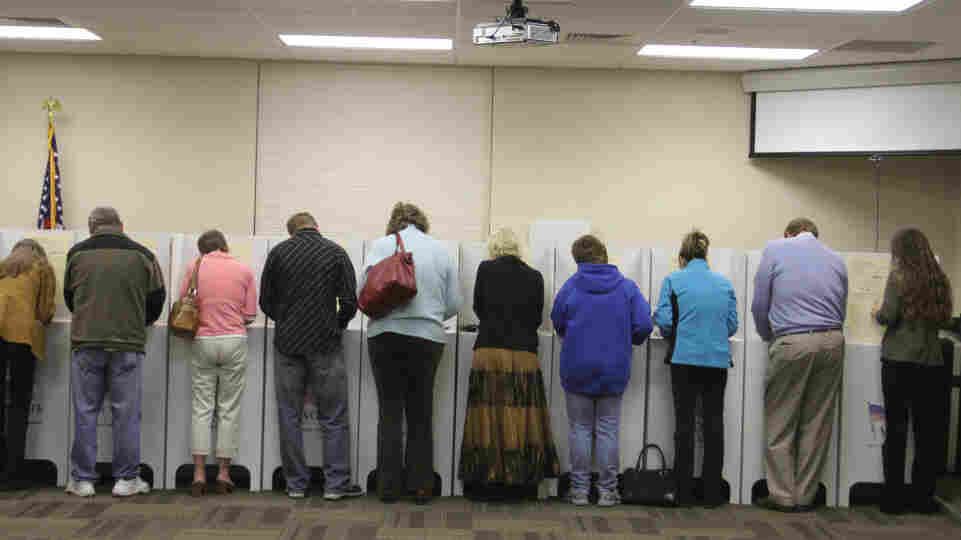 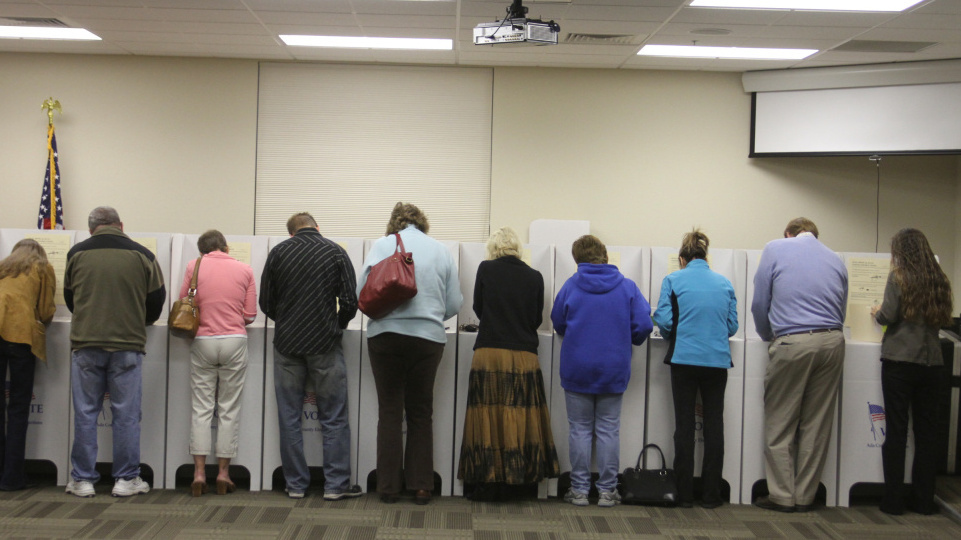 Voters cast their ballots in Idaho's general election last November. The state requires photo IDs to be presented at the polls.

While campaigning to become Kansas' secretary of state, Kris Kobach held a press conference to make the case for a photo ID requirement at the polls. In his argument, he noted that a man named Alfred K. Brewer, who died in 1996, had voted in the 2010 primary.

There was just one problem with that: Brewer wasn't dead.

Shortly after the press conference, Brewer's wife received a call regarding her husband's "passing."

"And she says, 'Well, why do you want to talk to me? He's out raking leaves,'" Brewer says.

It turned out the voter rolls Kobach referenced had the birth date for Brewer's father, who had the same name.

Despite the mistake, Kobach was trying to make a serious point. He's part of a growing number of Republican lawmakers trying to crack down on voter fraud.

Kansas, Alabama and Tennessee mandated that voters show proof of citizenship before registering to vote. Six states now require voters to show a government-issued ID at the polls. Other states, like Florida and Ohio, have cut short their early voting programs.

Ari Berman, who's reported on these laws for Rolling Stone magazine, says that requirements in the name of protecting against voter fraud actually suppress certain voter demographics.

"I believe what Republicans are trying to do is make it harder for Democratic candidates to turn out an electorate [like] they turned out in 2008, which is young voters, African-Americans, Hispanics," Berman tells Guy Raz, host of weekends on All Things Considered.

He says those are the people who are disproportionately affected by the new laws.

"This legislation is written in such a way that it actual prohibits people in certain states from voting who would have the right IDs," he says.

Barriers Before The Polls

Most people do have a photo ID of some kind, but there are still some who might not be able to vote because of the new laws. The elderly and disabled might have trouble getting to a DMV to renew their licenses. Others might not be able to afford a passport or lack the proper documentation for an ID, like a birth certificate. In some states, like Texas, student IDs are not acceptable.

Berman says there are already fines in place to deter voter fraud. He says he thinks the restrictions won't prevent any wrongdoing and that the crime isn't widespread at all.

"A voter is more likely to be struck by lightening than they are to impersonate another voter at the polls," Berman says, citing a report from the Brennan Center for Justice.

Berman says the Department of Justice looked into 300 million votes cast between 2002 and 2007 and failed to prosecute a single person for impersonating an eligible voter at the polls.

In Pursuit Of Protecting Elections

Kobach says there have been 221 incidents of voter fraud since 1997 in Kansas, evidence that he calls "the tip of the iceberg." About 30 of those cases were investigated and seven people were convicted. 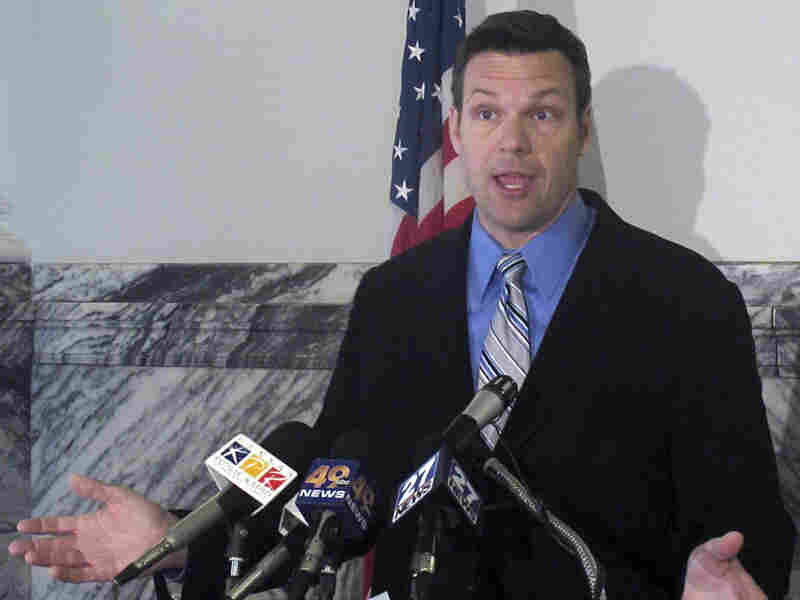 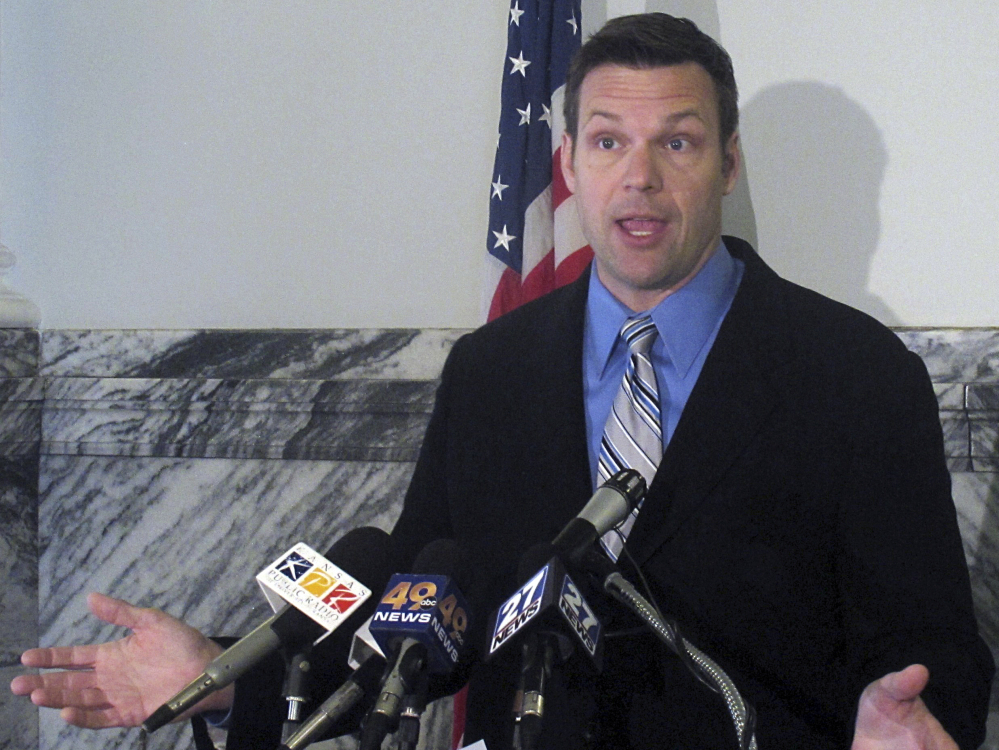 Kansas Secretary of State Kris Kobach pushed for a state law requiring voters to show a photo ID at the polls.

Seven convictions over 13 years doesn't seem like an indicator of a widespread abuse, but Kobach says those cases can sway elections, especially on the local level.

"When you have multiple cases of election fraud in an election and the election is a close one, it can ultimately end up throwing the election to the candidate who profits from the voter fraud," he says.

Kobach says there's no evidence to suggest voter turnout is suppressed by laws like the one in Kansas and that a photo ID is a perfectly acceptable requirement.

"It does not burden the right to vote" in any way that might be seen as a violation of the Constitution, he says.

"These are reasonable protections we can put into place," he says, "and in doing so, we really protect the integrity of our elections and ensure that in those rare cases, elections are not stolen."