Accessibility links
At The Mississippi's Edge, Residents Cling To Land In the netherworld between the river and the levee outside New Orleans, there are a dozen eccentric structures. Some are rundown, some are handsome, and all of them are handmade — by residents who believe the land belongs to them. 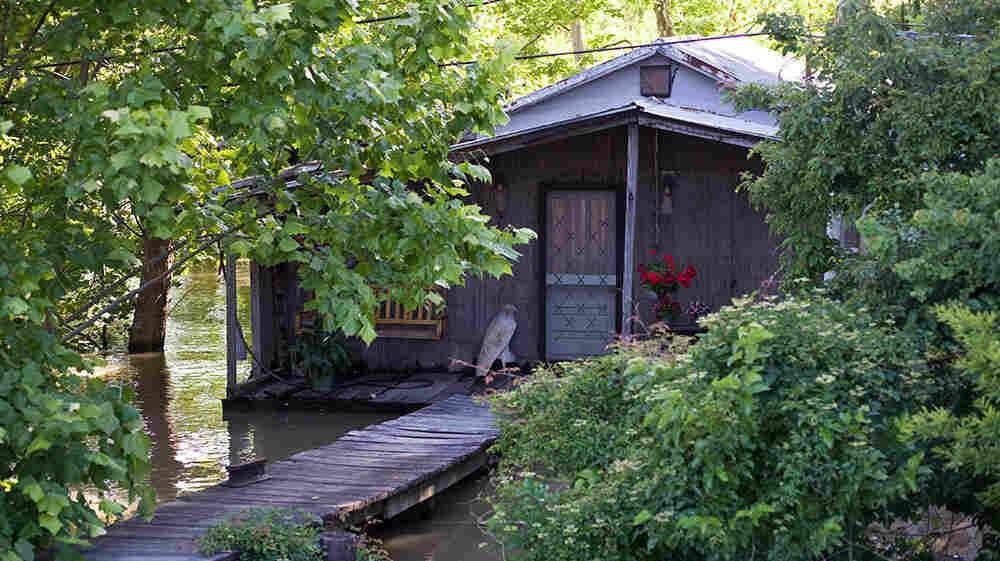 Occasional flooding is part of life on the batture, between the Mississippi River and the levee. Kevin O'Mara hide caption 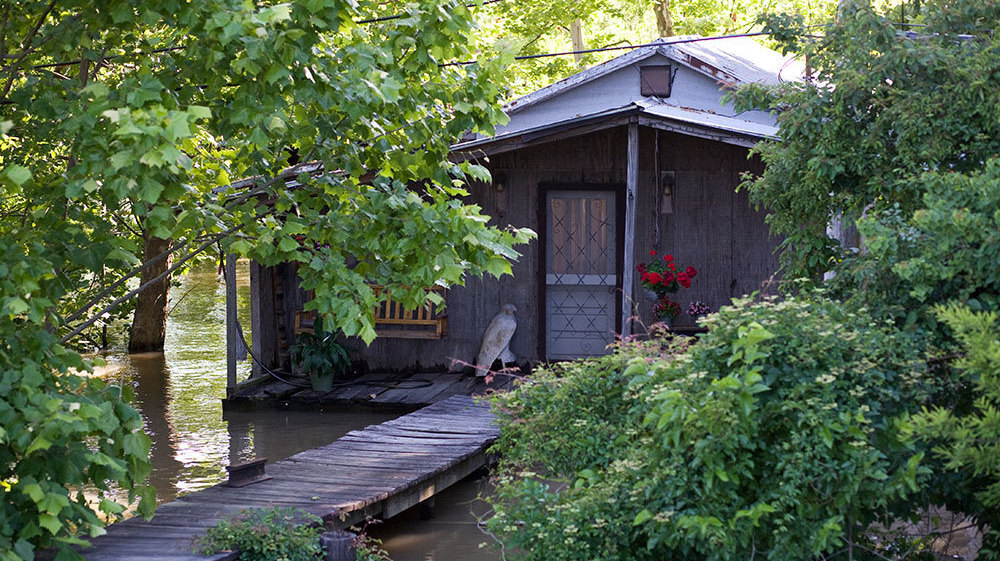 Occasional flooding is part of life on the batture, between the Mississippi River and the levee.

In the netherworld of the batture between the levee and the Mississippi River near New Orleans, there is a small community built on stilts. Locals call them "camps": a dozen eccentric structures — some rundown, some handsome, all handmade — clinging to the river side of the great dike.

One man has been fighting for years to claim this land, which he says belongs to his family, but those living on the batture don't seem too worried about losing their homes. 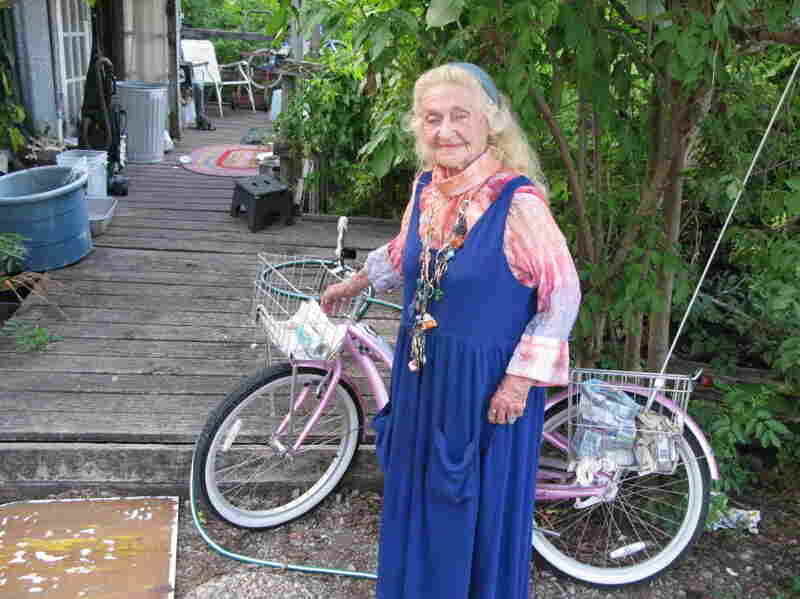 Jean Brady Hendricks, 88, is happy in the batture. After living in New Orleans for most of her life, the former torch singer moved to the community about three years ago. John Burnett hide caption 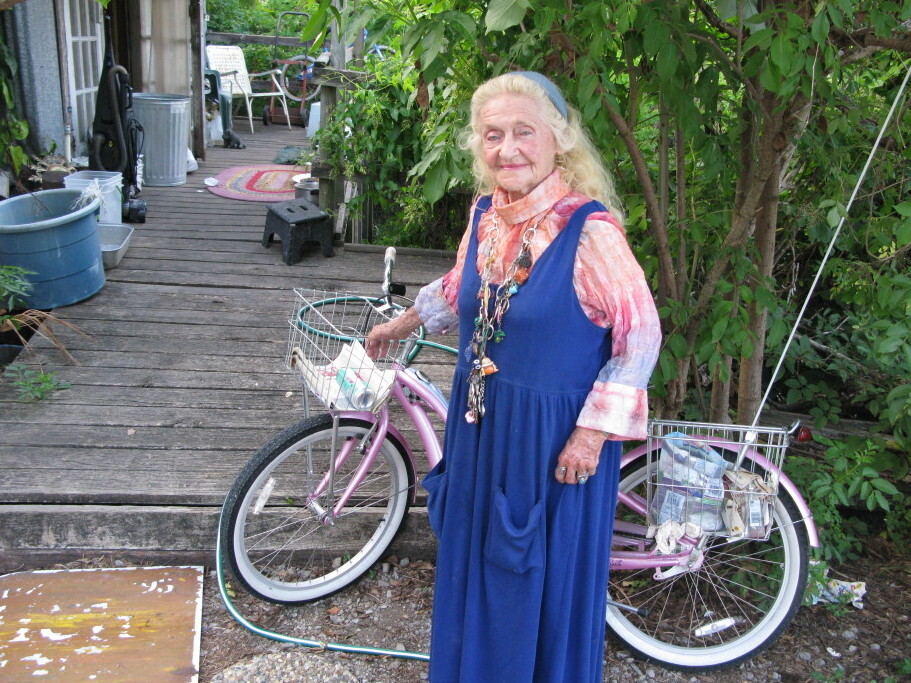 Jean Brady Hendricks, 88, is happy in the batture. After living in New Orleans for most of her life, the former torch singer moved to the community about three years ago.

Jean Brady Hendricks is 88. She wears long dresses and gaudy jewelry, and rides a pink Schwinn. Her home is a ramshackle thing swallowed by river vines and visited by night creatures for whom she puts out cat food. She is happy here.

Hendricks used to be a torch singer in the French Quarter at places like Poodle's Patio lounge and the Gunga Din club. For most of her life, she lived in New Orleans; she moved to the batture about three years ago. When she first saw her house, she says, she broke into song.

"'A shanty, a shanty, an old shanty town, the roof is so slanty it's touching the ground.'" she sings. "I think it's the worst looking house up here, but I don't mind," she says. "If I was younger, I'd mind. It's funny how you become more tolerant as you get older."

'A Really Different Kind Of Place'

Life on the batture becomes a different world at night. The breeze is always cool. The willow trees come alive with tree frogs calling out for casual sex. Giant freighters outlined in navigation lights glide past in the gloom. They're surprisingly quiet, until their wake hits the earthen levee.

Macon Fry sits out on his deck, sipping a cold beer over the water.

The Mississippi River winds past the City of New Orleans between enormous levees and a rim of land and trees. This is the batture, where the water beats against the land, and it is where the river breathes.

"Down on the Batture," by Oliver Houck

"I love the sounds here. The place seems alive to me all the time, not just the frogs, but there's always movement, whether it's ships or trains or the water moving under us," he says.

Fry is a wiry, tanned urban farmer and educator, who teaches kids about agriculture. He lives in a house he built from salvaged wood; there's a goat named Sweet Pea on the porch. With spring floods this year, the Mississippi rose almost to his floorboards, but it never flooded his house. Fry says he likes living on the edge.

"It's an edge community. It's not in the city, and it's not really in the river. But it's on the edge, and there's a lot of interesting things that happen on edges," he says. "Things wash up, things show up, animals show up, different plants grow on edges. That's the way it feels, it feels like a really different kind of place."

Once upon a time, camps lined the batture all along the great crescent of river that gives New Orleans its nickname. After the historic flood of 1927, the Army Corps of Engineers decided to enlarge the levees and almost all the camps, teetering on their pilings, had to go.

"So what we have now is a little appendix of about a dozen houses up there which are the remnants of what once lined the riverbanks from downtown New Orleans all the way up here to the parish, a good 6, 7 miles," Tulane environmental law professor Oliver Houck says.

A Long Battle Over Ownership

For his book, Down on the Batture, Houck spent a lot of time exploring its history. He came across a landmark case from the early 1800s that decided the fundamental question of who owns the batture.

"The end of it was the American idea won. This was private, and that eliminated the publicness of the batture," he says.

A New Orleans lawyer named Ashton O'Dwyer Jr. has been fighting in the courts for years to prove that his family is the rightful owner of this riparian neighborhood.

"I don't want to have anything to do with anything that belongs to these squatters and trespassers," he says emphatically. "Get off my property, remediate it and give it back to me — and pay me damages."

In the kitchen of his St. Charles Avenue manse, O'Dwyer is a picture of southern gentility in a blue blazer, pink oxford shirt and a tie with little pheasants on it.

He covers the counter with legal papers, which purport to show that his great uncle, a casino owner, originally bought the batture property from an oil company.

"It demonstrates clearly and unequivocally that George acquired this property from the Texas Company in July of 1945," O'Dwyer says, his finger on one of the documents.

The Jefferson Parish tax office, in fact, produced records that show that the O'Dwyer family has been paying annual property taxes of about $1,500 a year on the disputed batture land.

"Who else do you know lives rent-free and tax-free on land owned by other people?" he says angrily. "These people are scumbags. Get off!"

Yet O'Dwyer's epic struggle to regain what he claims is his family land has run off the tracks, and his personal life has, as well. Once a leading admiralty lawyer in New Orleans, O'Dwyer has been disbarred and banned from all state and district courts for using abusive language and threatening judges.

He has filed for bankruptcy, and he faces charges of threatening federal officials, which are on appeal.

For the moment, the batture lawsuit and his other prolific litigation, have been "administratively closed" by the courts.

As a result, the batture dwellers don't seem overly concerned.

"Nobody really worries or even thinks about that. It's a dead issue as far as everybody up here," architect Steve Schweitzer says. "Nobody up here feels like they're squatters. We're owners of our own property."

He lives with his wife, Sandra, in a modern house they completed last year that's painted a brilliant blue and orange, nothing like the tumbledown camps of old.

They moved to the batture after Hurricane Katrina destroyed their house and their printing business in town.

"It was bad enough that Katrina hit, and then you spent two to three years dealing with insurance companies. It was not a fun time. We built this one not to lose it, so hopefully we won't," Sandra Schweitzer says.

They have decided it's safer to live outside the bowl of New Orleans, down on the batture, with the Father of Waters in their backyard.

Historic Photos Of The Batture