Accessibility links
Jimmy Carter: 'No Downside' to Palestine Statehood Jimmy Carter, the first U.S. president to call for a Palestinian homeland, urges the U.S. to not veto Palestine's statehood vote at next week's U.N. meeting. There's "no downside" to it, he says, as international recognition could reinvigorate failed peace talks between Israel and Palestine. 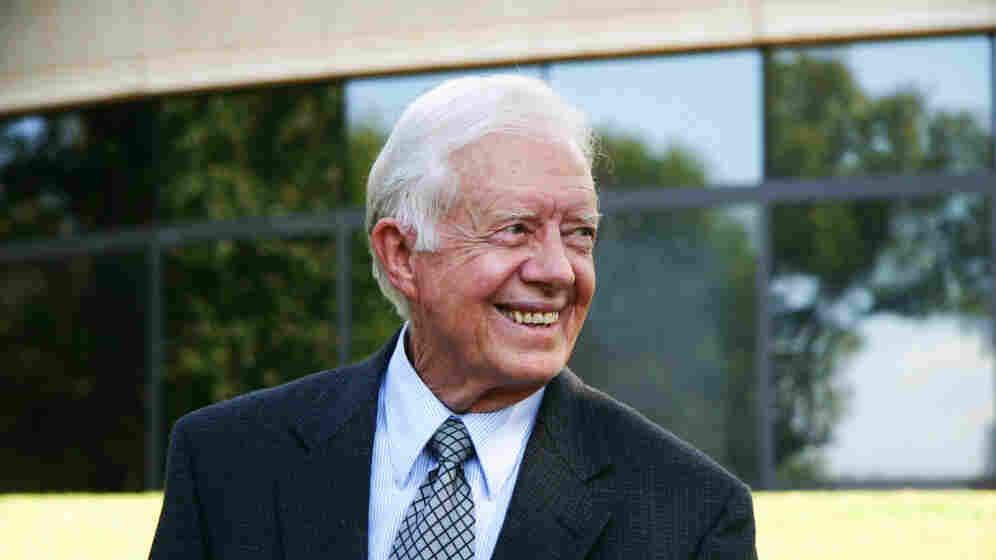 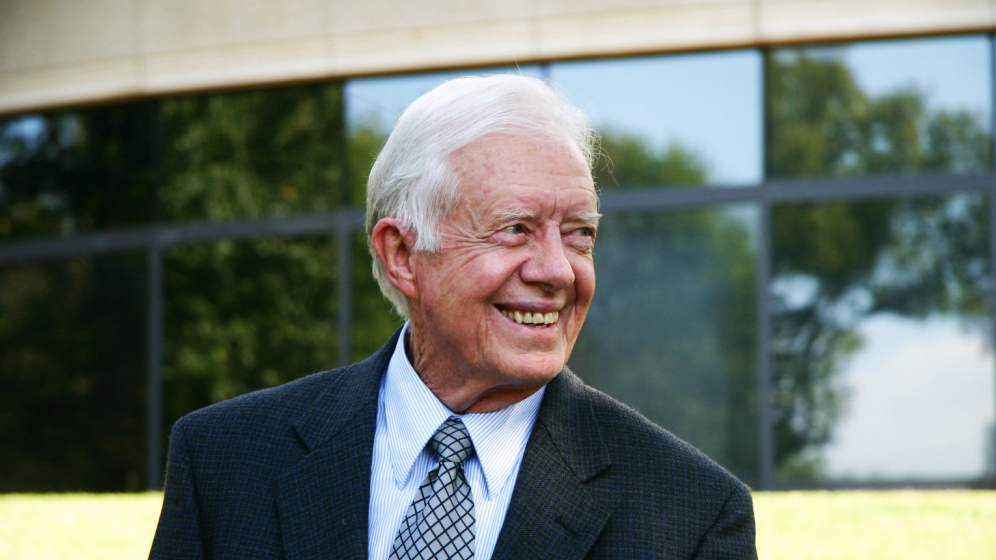 "If I were president, I'd be very glad to see the Palestinians have a nation recognized by the United Nations," Carter tells Guy Raz, host of weekends on All Things Considered. "There's no downside to it."

Carter admits that for President Obama, failure to veto "would have some adverse effects perhaps on his political future."

But he thinks it's a price worth paying. His predecessor Harry Truman backed the creation of Israel for moral reasons, against the advice of his inner circle. Carter says that today, Palestinian statehood is "a basic moral commitment" for the U.S. 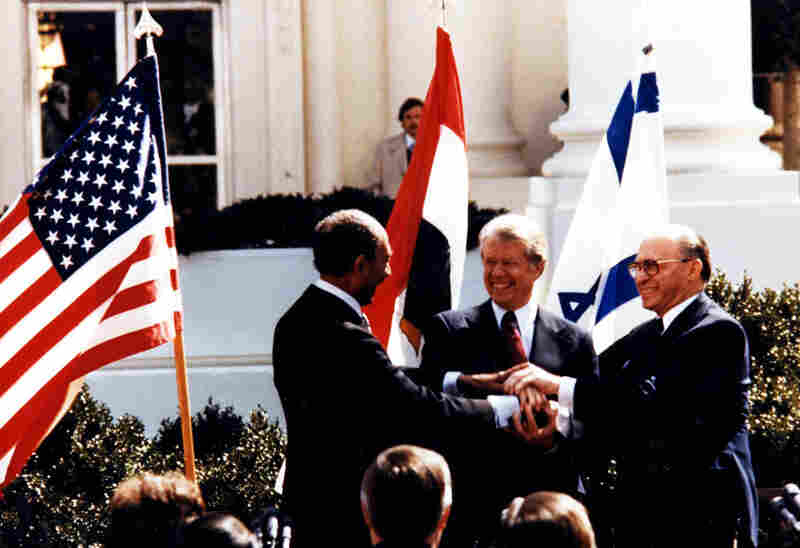 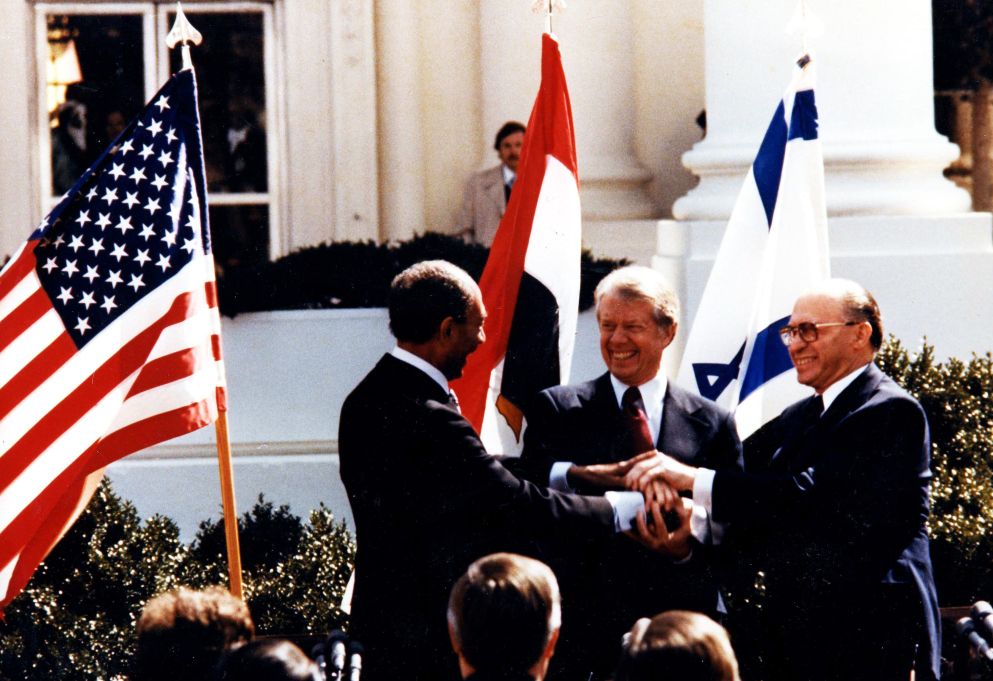 In 1977, Carter became the first American president to call for the creation of a Palestinian "homeland." He signed the Camp David Accords, which established diplomatic relations between Egypt and Israel, and called for self-governance of the Palestinian people. After his term, he authored several books on the conflict, including the controversially titled Palestine: Peace Not Apartheid.

Carter asserts that, in light of the breakdown of U.S.-mediated peace negotiations, "the United States' influence among the Palestinians and inside Israel is at the lowest point it's been in the last 60 years."

The statehood vote is largely symbolic, making Palestine akin to the Vatican. Its greatest value, according to Carter, is to break the impasse in negotiations for a two-state solution. Without a vote, Carter says, "the only alternative is a maintenance of the status quo."

Israel adamantly opposes the U.N. vote and fears it could spawn another round of violence aimed at civilians.

"My position has always been, along with many other people, that any differences be resolved in a nonviolent way," Carter says.

In 1948, President Truman endorsed the creation of an Israeli state. Nearly three decades later, before finalizing the Camp David accords, Jimmy Carter became the first U.S. president to call for the creation of a Palestinian "homeland." Presidents have put their own spins on that effort ever since. Here's a sampling:

March 16, 1977 — Carter, at a town hall meeting in Massachusetts, said that after Palestinians recognize Israel's right to exist, "There has to be a homeland provided for the Palestinian refugees who have suffered for many, many years."

Sept. 1, 1982 — Ronald Reagan: "The United States will not support the establishment of an independent Palestinian state in the West Bank and Gaza, and we will not support annexation or permanent control by Israel. ... Self-government by the Palestinians of the West Bank and Gaza in association with Jordan offers the best chance for a durable, just, and lasting peace."

Oct. 30, 1991 — George H.W. Bush: "Throughout the Middle East, we seek a stable and enduring settlement. We've not defined what this means; indeed, I make these points with no map showing where the final borders are to be drawn. Nevertheless, we believe territorial compromise is essential for peace."

Jan. 7, 2001 — Bill Clinton: "There can be no genuine resolution to the conflict without a sovereign, viable Palestinian state that accommodates Israelis' security requirements and the demographic realities."

June 4, 2009 — Barack Obama, in Cairo: "The only resolution is for the aspirations of both sides to be met through two states, where Israelis and Palestinians each live in peace and security. ... Israelis must acknowledge that just as Israel's right to exist cannot be denied, neither can Palestine's. The United States does not accept the legitimacy of continued Israeli settlements."

May 19, 2011 — Obama: "The borders of Israel and Palestine should be based on the 1967 lines with mutually agreed swaps, so that secure and recognized borders are established for both states. The Palestinian people must have the right to govern themselves, and reach their potential, in a sovereign and contiguous state."