Accessibility links
Ups And Downs Of A Tech Startup Roller Coaster Like entrepreneurs everywhere, the trio who founded Bluebox Now dream of making it big. But first they have to learn some lessons. As they're getting off the ground, a cycle of mentorship feedback and retooling drives their growth, though that may mean falling behind schedule. 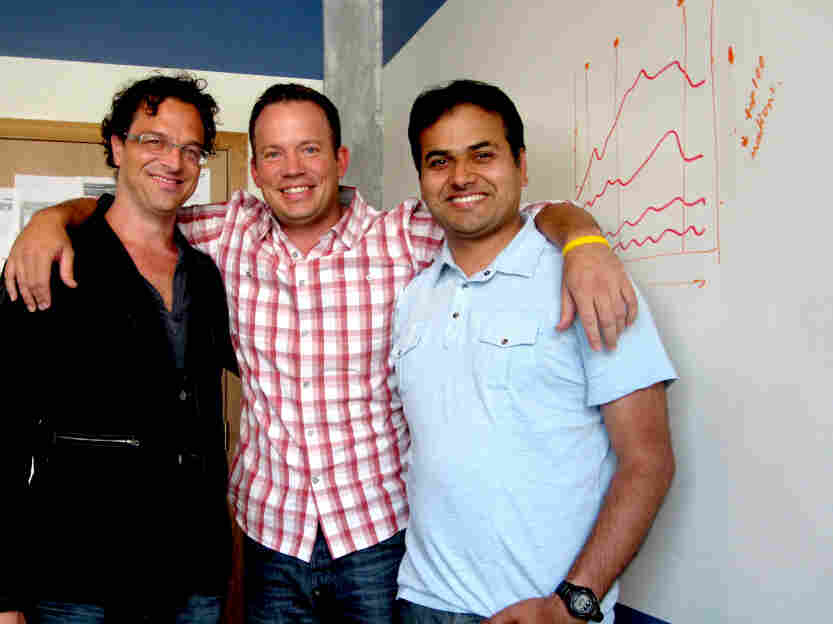 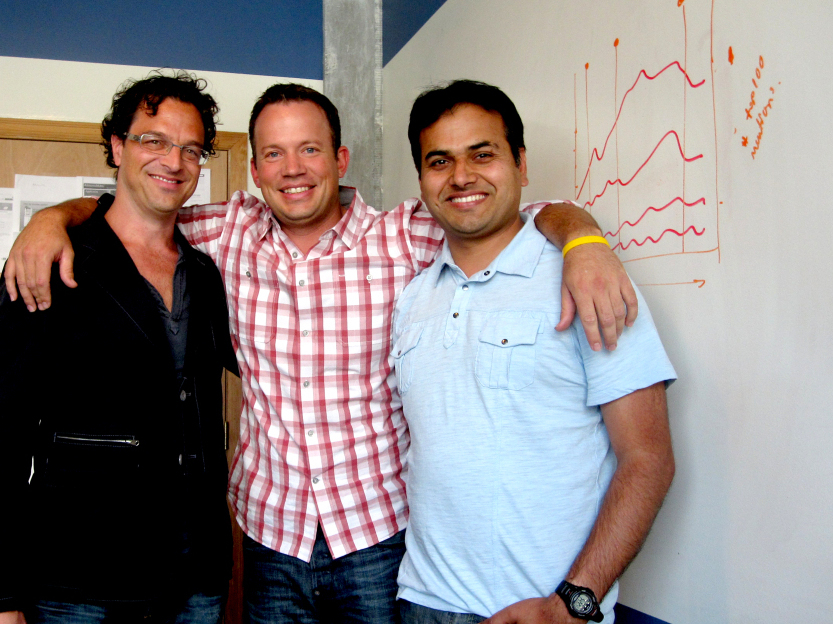 Bluebox Now is an aspiring, young startup that aims to revolutionize how companies market to their customers. Like entrepreneurs everywhere, the trio who founded the firm dream of making it big.

Now, they're trying to perfect their product, garner customers, bring in revenue and — they hope — profits.

Earlier this year, the founders of Bluebox Now, all in their 30s and 40s, were faced with a choice. The company they were working for was bought out, and they had to decide what to do next.

"I was at a point where I had applied for job at Microsoft and I was offered the position," says Craig Guenther-Lee.

Today Guenther-Lee is the creative director at Bluebox Now. But a few months ago, he was mulling the Microsoft offer and its six-figure salary.

"I [thought] ... Do I want to go ahead and take this safe, secure job, which would have been great for my family? But I was really ready to launch into something else. We worked really well together as a team and I thought that together we could do something extremely exciting," Guenther-Lee says.

Chad Reed and Naresh Dhiman, the company's other co-founders, thought the same thing. They collectively ponied up about $50,000 and a company was born

Reed, the chief marketing officer, started his career serving drinks as a cabana boy for Caesar's Palace. The onetime college quarterback spent years as a brand manager for the beverage company Red Bull.

Dhiman, the company's chief executive officer, is a veteran software architect. About 15 years ago he started a small company in India, and later moved to the U.S. during the dot com era.

Introducing himself to a group of entrepreneurs recently, he remarked he had made a big mistake by turning down a chance to join Google in the late 1990s. 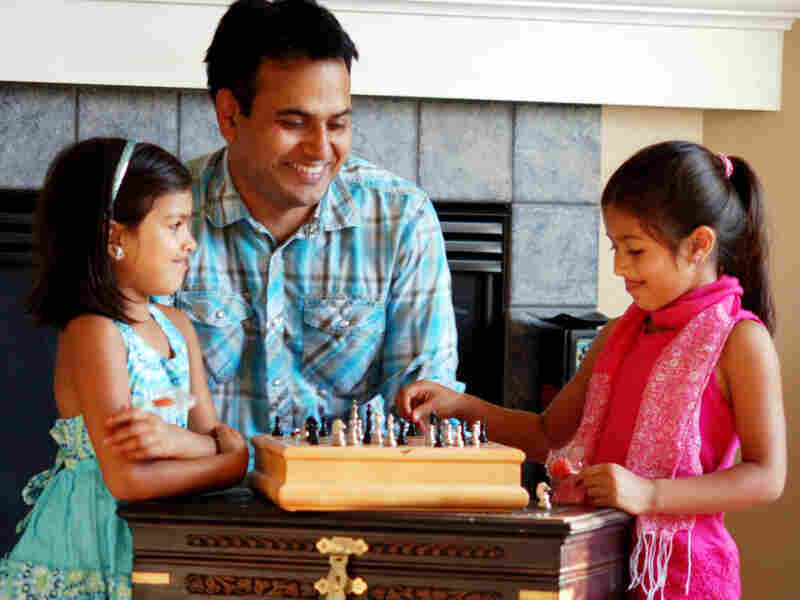 Naresh Dhiman plays chess with his two daughters. Dhiman's wife encouraged him to launch his own company, and she now works 3 to 4 hours a day overseeing their software developers in India. Shelly Dhiman/Courtesy Naresh Dhiman hide caption 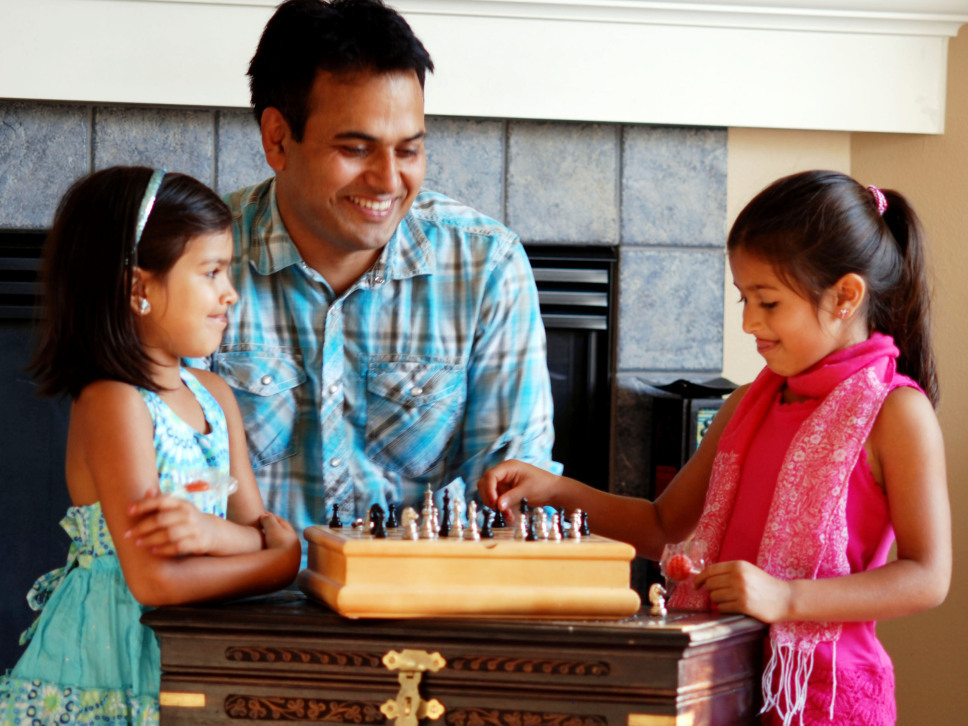 Naresh Dhiman plays chess with his two daughters. Dhiman's wife encouraged him to launch his own company, and she now works 3 to 4 hours a day overseeing their software developers in India.

Fortunately for him, his wife fully supports his new venture.

The startup hopes to dramatically change how companies target their customers through marketing. Reed explains that with Bluebox Now, restaurants, hotel chains, department stores and other businesses could integrate the e-mail data they already have about their customers with information about those individuals posted online.

"We know this is something that they could absolutely use," Reed says.

The team got a big vote of confidence earlier this summer when it was chosen for a highly selective tech incubator program.

At an orientation, Andy Sack, managing director of TechStars Seattle, explains that 10 companies will participate in the program for three months. It culminates on what's called Demo Day in early November, where they'll pitch their ideas to investors.

"Very excited to be here," Reed says to the group. "I mean, you see all this brain power in this one [place]."

TechStars Seattle is one of a number of tech incubators. Typically, they provide a small amount of funding — in this case, $18,000 — in exchange for a small equity stake.

A Shift In The Pitch

As part of the program, the guys from Bluebox Now meet with technology experts, marketing gurus and venture capitalists. Dhiman says the constant feedback has been extremely valuable.

The whole principle of [a] startup is: learn. Deliver the small chunk of product and learn from feedback how you want to change it.

"[The] best thing is the mentors — they give feedback and they are very clear and very consistent, also," he says.

The company had been struggling with how to describe its product and pitch it to potential clients. Dhiman says the team had been focusing on what the product was, but after talking to mentors, they shifted their pitch to why clients need it.

"And that's a very, very different perspective, and it's very impact-making," he says.

Dhiman says prospective clients view what Bluebox Now is selling with more interest now, but he acknowledges that altering the team's approach has cost them time. So have communication problems with India-based software coders, and the decision to make their product more sophisticated than originally planned.

"The whole principle of [a] startup is: learn," Dhiman says. "Deliver the small chunk of product and learn from feedback how you want to change it."

'Ride The Peaks And Valleys'

The company is now running two months behind schedule. The revenue the founders had hoped to see hasn't materialized yet, and they are beginning to feel the pinch.

Dhiman is currently without health insurance, Guenther-Lee has taken on some freelance work and Reed is hoping he doesn't have to ask his family for a loan.

They all remain optimistic about the company's future, but as Reed and Guenther-Lee describe it, it's been a bumpy ride.

Guenther-Lee agrees. "I think that's part of the startup roller coaster — it's just that huge up and down. And you just ride the peaks and valleys; you go with it, you know."

Bluebox Now has landed its first paying client, and the first marketing campaign is slated for next month. Only then will the startup begin to discover if it can deliver on its promise to help companies target their customers more effectively.