Accessibility links
New Republic: An Electoral College Education Are we being schooled by the inefficiencies of our voting system? The New Republic's Jonathan Bernstein explains Pennsylvania's role within the greater debate surrounding the modern relevancy of the Electoral College. 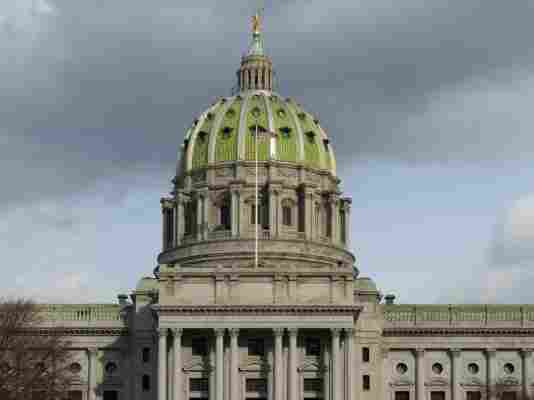 The State Capitol Complex in Harrisburg, Penn., where legislators are currently debating a proposal to shift the distribution of electoral votes. istockphoto.com hide caption

Jonathan Bernstein blogs at A Plain Blog About Politics.

This week, Pennsylvania Republicans created a stir by proposing to shift the way the state apportions electoral votes in presidential contests, switching from winner-take-all to the Maine plan, in which one electoral vote is awarded to the winner of each Congressional district, and then two are given to the winner of the state. The proposed Pennsylvania plan is odious because its goal is to tilt the playing field towards Republicans; it reduces the advantage of doing well in a state and therefore, if it's implemented only in Democratic-leaning states, it would make it very difficult for Democrats to win a closely-contested national election. But thinking about this latest scheme also raises bigger issues about the role of the Electoral College. It reminds us what was worthwhile about the system in the first place—and why a key argument for maintaining it may no longer apply as strongly as it once did.

As currently constituted, the Electoral College system benefits two types of states: big ones, and close ones. That's because the state winner-take-all mechanism means that winning, say, New Mexico (with its five Electoral Votes) is simply not as big a deal as winning Florida's 29 votes—so if the polling in both is equally close, campaigns are going to focus on the Sunshine State. On the other hand, campaigns would rather focus on close New Mexico than GOP-lock Texas (38 EVs) or solidly Democratic California (55 EVs).

One of the traditional advantages, then, of the Electoral College is that it would seem to restore some balance to a political system which massively overrepresents small states in the Senate. Nor are states the only issue here. Since, by definition, small states don't have large cities, the same things that make small states overrepresented in Congress also make cities, and in particular the largest cities, underrepresented. A presidential election scheme that rewards size and two-party competitiveness, then, tends to add balance to the overall system. As the late political scientists Nelson Polsby and Aaron Wildavsky said, "it is not necessarily a loss to have slightly different majorities preponderant in different institutions, but it is definitely a loss to have the same majority preponderant in both political branches while other majorities are frozen out."

But there's one catch: Over time, much of the aforementioned advantages conferred by the Electoral College appear to have eroded. The biggest reason for this lies in the changing distribution of strongly partisan states by size, in which bigger states have become less competitive. As a result, the largest states, and most big cities, are no longer the focus of presidential elections.

This wasn't always the case. Consider New York. It's hardly a coincidence that New Yorkers used to be on presidential tickets so often. Republicans chose a New Yorker as their presidential or vice-presidential nominee 11 times from 1876 through 1964, while Democrats did it a whopping 13 times from 1868 through 1948. And that's because New York, then the largest state, was also highly competitive. For example, in 1952 (a year with no Empire State pols on either ticket) Dwight Eisenhower beat Adlai Stevenson by 11 points nationally—and 12 points in New York. In other words, had the race been very close, New York and its 45 Electoral Votes would have been critical. And New York wasn't the only big state that was quite competitive. Of the seven states with at least 20 Electoral Votes that year, all seven polled within five points of Eisenhower's national spread—indicating that if the whole country had shifted towards the Democrats enough to make it a tie election, then the seven largest states would have all been battlegrounds. And as big states went, so went cities. Of the top ten largest cities in the 1950 census, only number nine, Washington (which was disqualified), and number 10, St. Louis, didn't come from states within that ten point band surrounding Ike's national margin.

Now, skip ahead to 2008. Barack Obama beat John McCain by about 7 points nationwide—but by 27 points in New York, which hasn't had anyone on the national ticket since 1964 (except for marginal New Yorker Jack Kemp). Of the seven largest Electoral College states in 2008, only three were within five points of the national results. California, Texas, and New York, with a total of 122 electoral votes in 2012, haven't been critical states for years. And what of the cities? Instead of the top eight all in competitive states as it was in 1952, hardly any big cities mattered in 2008. Using the 2010 list of largest cities, only number 5, Philadelphia, was in a state that qualified (with perhaps number 6, Phoenix, and maybe number 3, Chicago, at least potentially in play without John McCain and Barack Obama at the top of the ticket).

From the point of view of those of us concerned about the unrepresentative qualities of the senate and the tendency of presidential elections to compensate, this is bad news indeed. As far as I know, however, there's no systematic reason why things have changed; it could just be a fluke that will reverse itself soon enough. After all, the logic for big states (with their varied interests) tending to be more competitive than small states makes sense, and even now large states still remain somewhat more competitive. It's hardly impossible to imagine California reverting to the competitive state it was up until the 1990s, or Democratic dreams of a demographic revolution making Texas a swing state coming true. Still, as a long-time reform skeptic, I'm a lot less confident in the benefits of the Electoral College than I once was. And if Republicans (and, perhaps soon, Democrats) are going to exploit Constitutional loopholes when they get the chance the way Pennsylvania lawmakers are threatening to do, then perhaps the current system will be eroded anyway. But whatever other ideas motivate potential changes, reformers would do well to remember that big states and the large cities they hold are otherwise underrepresented, and to make sure, at the very least, that they don't make things worse.