Accessibility links
Cherokees Face Scrutiny For Expelling Blacks The Cherokee Nation in Oklahoma is risking millions in federal funding after its decision to expel about 2,800 African-American members. Known as Freedmen, these members are descendants of slaves owned by Cherokees, and some wonder if the move is racist.

Every September, the Cherokee Nation celebrates its national holiday. The holiday marks the signing of its first constitution after the Trail of Tears in 1839. The main event, a big parade, features traditional Cherokee music, colorful floats and people singing and dancing in traditional garb. 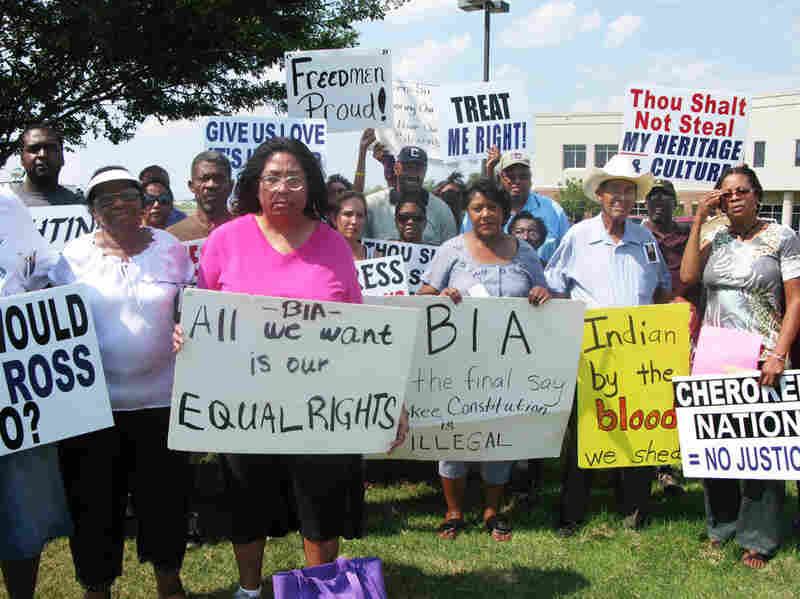 Black Freedmen, who are descended from the slaves of Cherokee Indians, protest their expulsion on Sept. 2 outside a regional Bureau of Indian Affairs office in Muskogee, Okla. Marilyn Vann, in pink, is the president of the Descendants of Freedmen Association. Alex Kellogg/NPR hide caption 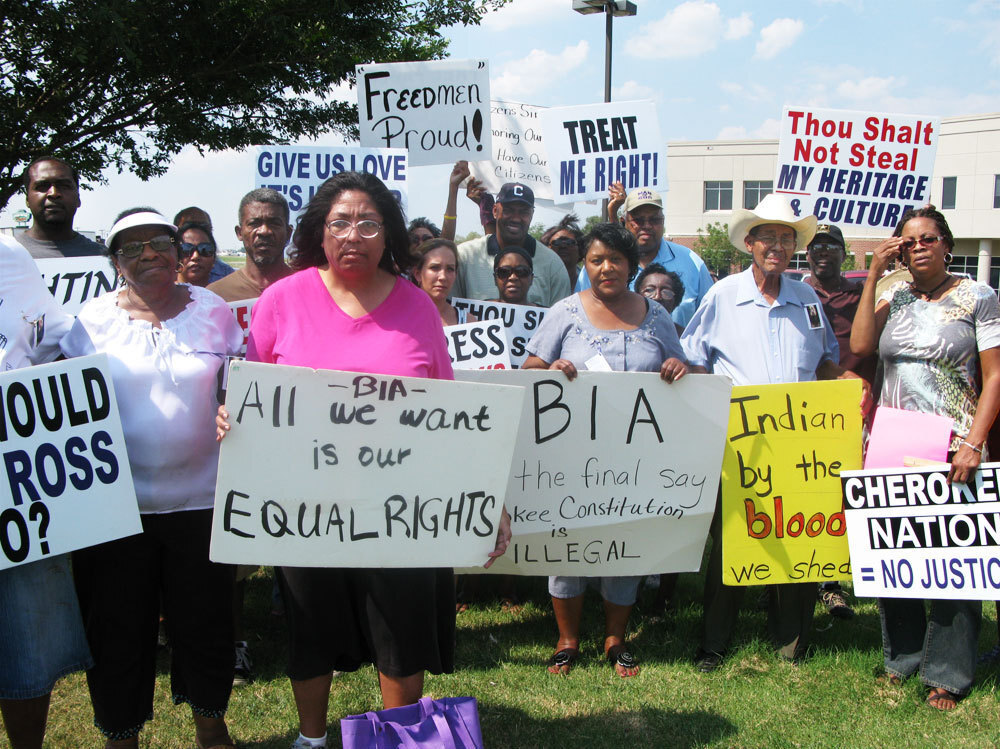 Black Freedmen, who are descended from the slaves of Cherokee Indians, protest their expulsion on Sept. 2 outside a regional Bureau of Indian Affairs office in Muskogee, Okla. Marilyn Vann, in pink, is the president of the Descendants of Freedmen Association.

The holiday draws tens of thousands of people to Tahlequah, Okla., the heart of the Cherokee Nation. But this year it was marked by controversy and protests.

The Cherokee Nation recently decided to limit its membership to people who can prove they have Indian blood. This strips of their citizenship rights about 2,800 African-Americans who are descendants of slaves once owned by wealthy Cherokees. Those rights include access to health care clinics, food distribution for the poor, and assistance for low-income homeowners.

The move prompted protests among these African-Americans, who are known as Freedmen, because for long periods in the past, they enjoyed equal rights in the Cherokee tribe. But in more recent history, their citizenship rights have been repeatedly challenged.

The decision has also put the Cherokees at odds with the federal government.

The Department of Housing and Urban Development has already suspended more than $37 million in funding to the Cherokee Nation. The Justice Department said last week that a key election for tribal chief later this month will not be recognized by the Department of the Interior, which has oversight over Indian affairs.

The Bureau of Indian Affairs declined an interview request, but in a letter sent to the Cherokee Nation earlier this month, it said the Freedmen's citizenship rights cannot be revoked. The Cherokee first agreed to grant the Freedmen equal rights in a treaty signed with the U.S. in 1866, following the end of the Civil War.

Emancipation And The Dawes Rolls

In 1866, the Cherokee Nation signed a treaty with the federal government that abolished slavery, except as a means of punishment, and granted former African-American slaves and their descendants "all the rights of native Cherokees." Blacks often had more rights on Indian reservations and territories in the South than they did in the Jim Crow South. Many of these former slaves were later listed by the U.S. government as "Freedmen" on an index known as the Dawes Rolls.

The Dawes Rolls lists the names of Indian citizens who applied for enrollment on the rolls of various tribes in Oklahoma around the turn of the 20th century. Today, the Cherokee Nation requires that a citizen have an Indian ancestor who appears on the Dawes Rolls. The document not only had categories for Indians who were mixed with white, but also categories for whites who married into the tribe, and blacks (Freedmen). The index was finalized on March 4, 1907, though updates would be made later.

The Freedmen say they've been kicked out of the Cherokee Nation by people who are no more Indian than they are.

"The majority of folks who are members of the tribe ... have lived lives of white privilege," says Marilyn Vann, who heads the Descendants of Freedman Association. She says many Cherokees are largely white and are "people who have never been discriminated against in their lives."

The Cherokee Nation's Supreme Court ruled in late August that the black Freedmen could be stripped of their citizenship because they can't prove they have Indian blood. The tribe first voted in favor of this effort in 2007. While turnout for Cherokee elections tends to be low, more than 75 percent of all voters were in favor of the move.

Cherokee leaders say it's not a matter of race, but a simple matter of narrowing the definition of Indian down to those people who can prove they have Indian blood.

"This is not a club; you can't just claim to be Cherokee and show up and be included," says Cara Cowan Watts, a vocal member of the Cherokees' tribal council.

The Cherokee Nation is the largest of three federally recognized Cherokee tribes. It boasts more than 300,000 members, and like many Indian nations, it fiercely defends its right to self-governance.

"This is absolutely something that we have to defend. And the Cherokee people overwhelmingly voted in the Constitution that we want to remain an Indian tribe made up of Indians," Watts says.

Watts notes that the Cherokee Nation has decided that the Freedmen will be allowed to regain their citizenship if they can simply prove they are part Indian.

Watts also points out that there are approximately 1,500 black citizens in the Cherokee Nation who have not lost their citizenship rights, because they are not just descended from Cherokee slaves but also from Indians. 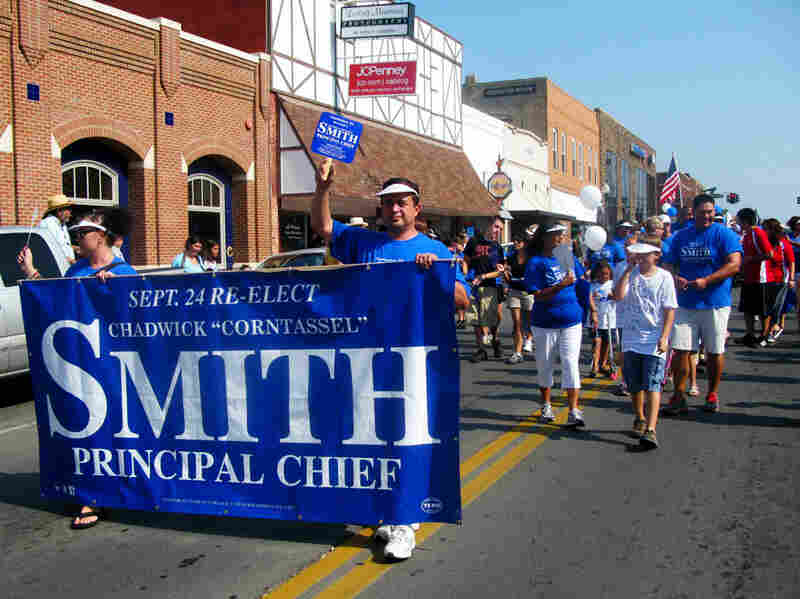 Supporters of Chad Smith take part in the Cherokee National Holiday parade on Sept. 3 in Tahlequah, Okla., the heart of Cherokee country, on Labor Day weekend. Smith was tribal chief from 1999 until earlier this year. He is hoping to win re-election later this month. The federal government says it won't recognize the election results. Alex Kellogg/NPR hide caption 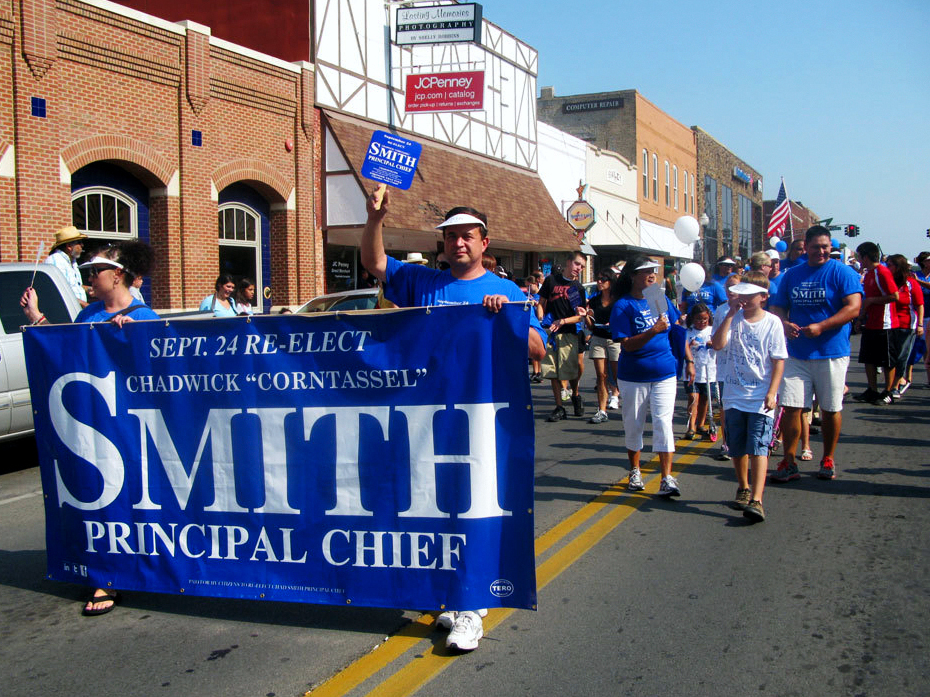 Supporters of Chad Smith take part in the Cherokee National Holiday parade on Sept. 3 in Tahlequah, Okla., the heart of Cherokee country, on Labor Day weekend. Smith was tribal chief from 1999 until earlier this year. He is hoping to win re-election later this month. The federal government says it won't recognize the election results.

It is a largely forgotten footnote of history that some wealthy Indians in the Deep South owned African slaves. Those slaves joined their Indian masters on the Trail of Tears, when tens of thousands of Indians were pushed out of the Deep South and west into Oklahoma in the early 1800s.

The Freedmen say the Nation's decision prevents more than 3,500 blacks from becoming Cherokee citizens, because their applications have never been processed. They claim tens of thousands of Freedmen exist and that many have been discouraged by historic discrimination and other barriers to citizenship blacks have faced, particularly in recent decades.

The Freedmen's estimates may be sound — many historians agree that at least 10 percent of all people on the Cherokee Trail of Tears were black. The vast majority were slaves, though some were runaways and intermarried, free blacks.

Some Indian tribes have a blood quantum that requires a grandmother or great-grandfather be Indian. Not the Cherokees.

They simply require that a citizen have an Indian ancestor who appears on the Dawes Rolls — lists of Indian citizens created by the U.S. government in the early 1900s. They included categories not only for Indians of various blood mixtures but for whites and blacks as well.

In fact, the Dawes Rolls included thousands of blacks and whites who had lived with Indian tribes such as the Cherokee for generations. These non-Indians were historically recognized as Cherokee citizens.

And that's why some view the tribe's recent decision as unjust.

"They never said we were lying; they never said that evidence that is in the National Archives, that is in the libraries here, was false," Vann says. "But it's basically, we can do what we want to do — we have casinos; we can buy Washington, D.C., from the top on down — that's the mentality of the folks here."

Daniel Littlefield is a historian at the University of Arkansas who has written books on this subject. He says there's another problem with the Nation's decision: Many black Freedman actually have Indian blood.

"I have to say frankly that when you start making a blood argument for membership in an organization, you are dealing with race whether you want to or not," he says.

But the problem, he says, is that blacks — even those who were part Indian — were simply labeled as black on the Dawes Rolls, yet those Indians mixed with white were labeled Indian.

That's why Littlefield thinks it's unfair for the Freedmen to be singled out.

"There were many Cherokees in the Cherokee Nation and on the Cherokee-by-blood roll who had very little blood quantum," he says. "If you think that one-one-thousand twenty-fourth Cherokee blood makes you a Cherokee, then that to me is one of the most blatant forms of racism."