Accessibility links
Who's Weighing Tax On Rich? Millionaires In Congress President Obama's "Buffett rule" would mean a new tax for people making more than $1 million a year, who currently pay a much lower rate than an average middle-class American. The president, in fact, proposed this rule to a group of people with a lot of millionaires in it: Congress. 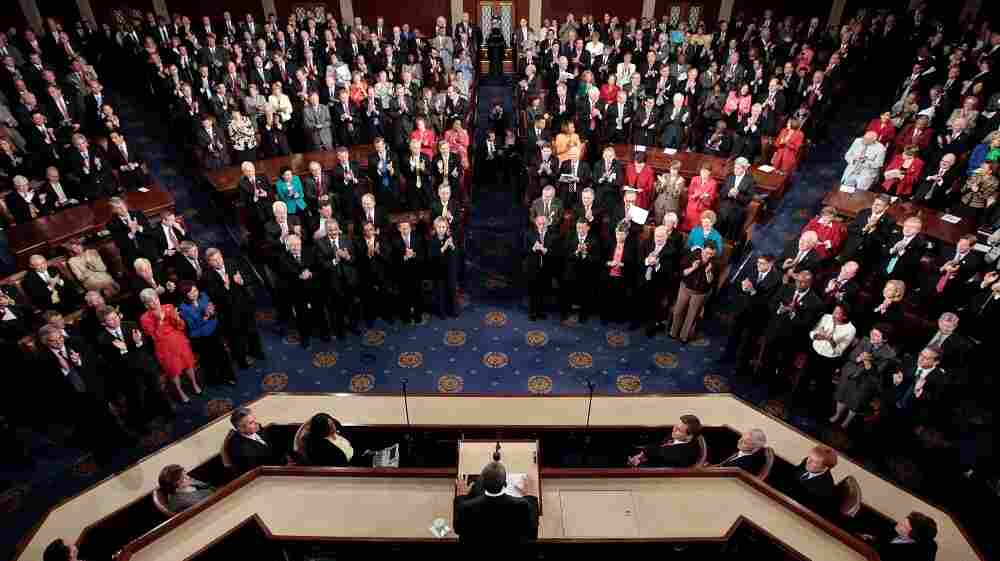 Members of the U.S. Congress applaud during a joint session at the U.S. Capitol. Nearly 50 percent of those in Congress are millionaires and may be affected by President Obama's tax proposal. Chip Somodevilla/Getty Images hide caption

President Obama continued laying what may be more groundwork for his re-election campaign Monday, including a new tax proposal. He calls it the "Buffett rule": a new tax on people making more than $1million a year, who currently pay a much lower rate than an average middle-class American. The president, in fact, proposed this rule to a group of people with a lot of millionaires in it.

That's according to the Center for Responsive Politics, a nonpartisan watchdog group that tracks money in politics.

Of the 435 members of the House, "244 current members of Congress are millionaires — that's about 46 percent and that includes 138 Republicans and 106 Democrats," says Center for Responsive Politics spokesman Michael Beckel.

Beckel is talking about net worth, the total amount of money and assets lawmakers have, according to their own financial disclosure forms. In fact, there are probably many more millionaires in Congress, since lawmakers don't have to include the value of their family home and other details.

Beckel says this wealth already makes life pretty different for lawmakers than it is for the constituents they represent. A member of Congress is more likely to be hit by the tax hike they're considering.

Now the Buffett rule is not aimed at millionaires per se — but at people who earn an income of at least $1 million a year. Some in Congress come under this category too.

But people much more likely to get hit by the Buffett rule? The donors.

"We don't know how many political donors are millionaires, but we do know that it takes a certain amount of disposable income to make contributions," Beckel says.

Campaigns are expensive. In 2010, says Beckel, the average winner of a House race spent $1.5 million. The average Senate winner spent close to $10 million. Closely contested races are much more expensive. And about half of that money, on average, comes from an elite group of very wealthy donors.

People who get a lot of attention from politicians and people who have plenty of opportunities to tell lawmakers how they feel about a new millionaires' tax.

"Wealthy Americans have more access to lawmakers than most regular voters and constituents do," Beckel says.

Not everyone agrees that the flow of money in politics creates a conflict of interest for lawmakers on some issues.

Roger Pilon of the libertarian think tank the Cato Institute says just the opposite.

"They're not going to be affected or corrupted by any single small contribution," Pilon said. "In fact, the more money there is, the less potential there is for such corruption."

If a lawmaker votes against a millionaire's tax, Pilon believes it's because of his or her political ideology — not because of a campaign donation.

So what we have here is a kind of chicken-and-egg question. Which came first, the donation or the decision on how to vote for a particular bill?

For the wealthy, opportunities to lobby against the millionaires' tax happen every day. All they have to do is pay the minimum donation — which could be $5,000 or even $30,000.