Accessibility links
Where Falling Satellite Lands Is Anyone's Guess Sometime this week, a school bus-sized satellite will fall to Earth after two decades in orbit. Most of it will burn up in the atmosphere, but some pieces — and one possibly as large as 300 pounds — are expected to hit the ground. But there's little risk that they'll hit a person.

Later this week, a retired NASA satellite the size of a school bus will finally fall back toward Earth after orbiting the planet for two decades. Most of it will burn up in the atmosphere. But about two dozen pieces are expected to hit the ground — somewhere.

And the biggest piece will weigh about 300 pounds.

If that has you worried, NASA emphasizes that in the history of the space age, there have been no confirmed reports of falling space junk hurting anyone. But that doesn't mean no one has ever been hit. 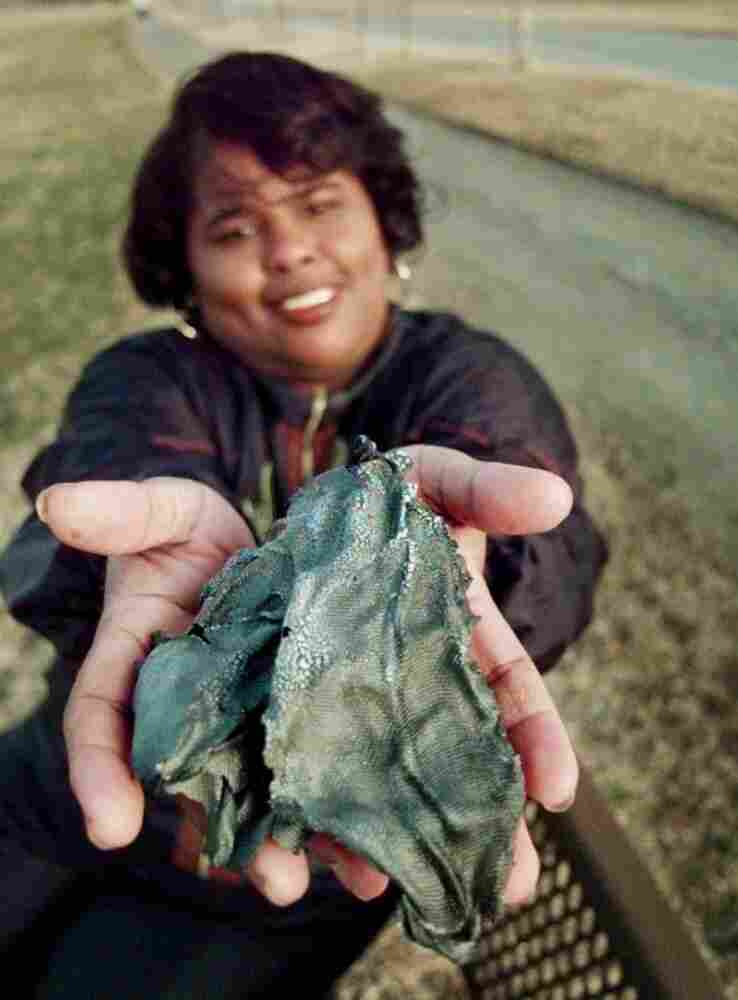 Lottie Williams holds a piece of a Delta II rocket that fell from the sky and hit her in the back while she was walking on a trail in Tulsa, Okla., in 1997. Brandi Stafford/Tulsa World hide caption 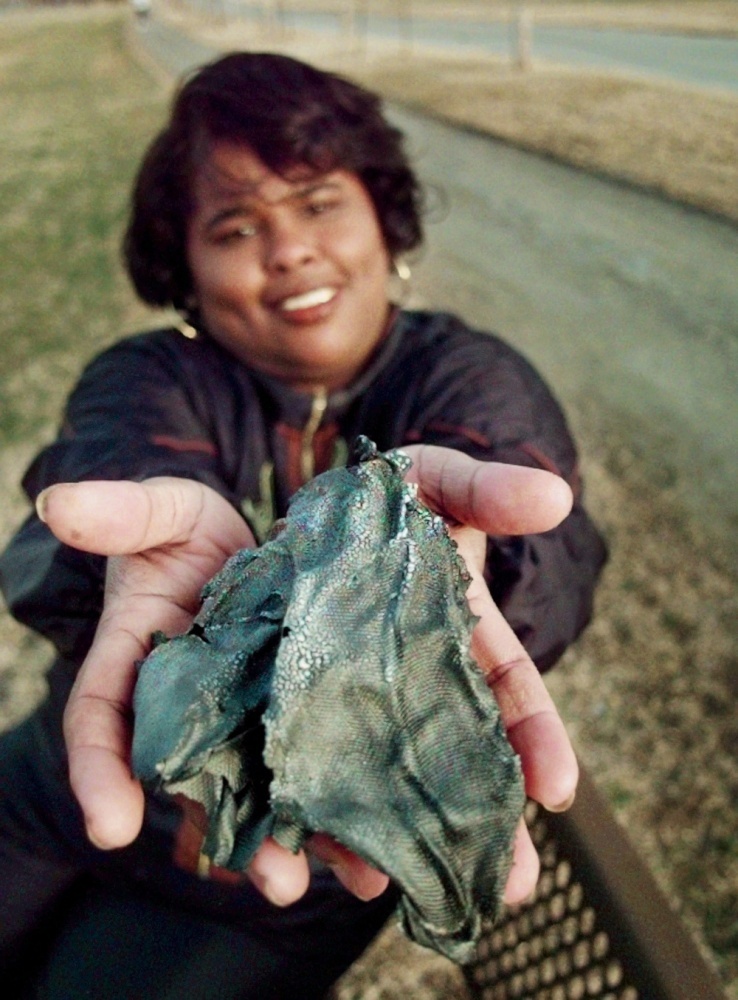 Lottie Williams holds a piece of a Delta II rocket that fell from the sky and hit her in the back while she was walking on a trail in Tulsa, Okla., in 1997.

Back in 1997, Lottie Williams of Tulsa, Okla., was walking through a park around 4 a.m. when she saw what looked like a shooting star.

"It was just a big ball of fire, shooting across the sky at just a fast speed," she recalls. A little while later, Williams felt a tap on her shoulder. When she turned around, there was no one there — but something fell to the ground.

It was a small piece of burned mesh. An analysis later showed that it's most likely part of a returning Delta II rocket — the fireball she saw in the sky.

"I think I was blessed that it doesn't weigh that much," says Williams, noting that larger pieces of this rocket fell elsewhere. "I mean, that was one of the weirdest things that ever happened to me."

When Williams heard that NASA's huge Upper Atmosphere Research Satellite is expected to make an uncontrolled re-entry later this week, she had one question: "It's not going to come across Oklahoma again, is it?"

The experts don't know. Predicting where and when something like this will come down isn't easy. NASA is saying this satellite is expected back on Friday, "plus or minus a day."

That was one of the weirdest things that ever happened to me.

Lottie Williams, of Tulsa, Okla., on getting hit by a piece of a Delta II rocket

Brian Weeden, a space junk expert with the Secure World Foundation who used to do re-entry analysis when he was in the Air Force, says making these predictions is a tricky business for all kinds of reasons.

There can be error in the observations made of orbiting objects with radar and telescopes. The atmosphere's density constantly changes. Experts have to factor in things like storms, winds and the object's size and shape. "And all of that makes it a very complex issue and one that's very, very hard to predict accurately," says Weeden.

He compares it to dropping a coin in a fish tank and trying to guess where it will land. Still, Weeden is not worried about getting hit.

"The earth is 70 percent water, and within the portions of it that are only land, there is a lot of land," he says.

NASA has actually calculated the odds that someone might get hit by this satellite. Mark Matney, an orbital debris scientist at NASA's Johnson Space Center in Houston, says the risk is 1 in 3,200. 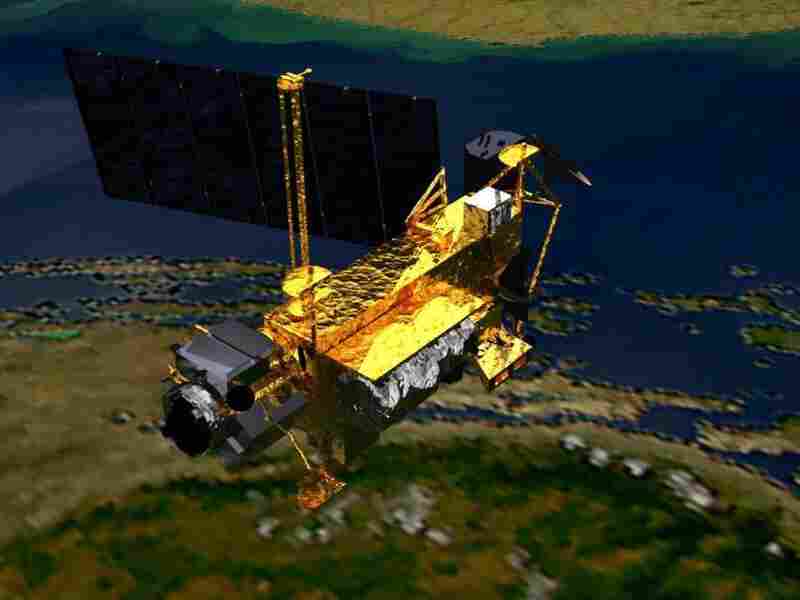 This artist's conceptual image shows the Upper Atmosphere Research Satellite, or UARS. After two decades in orbit, the satellite will make an uncontrolled re-entry into the Earth's atmosphere. NASA hide caption 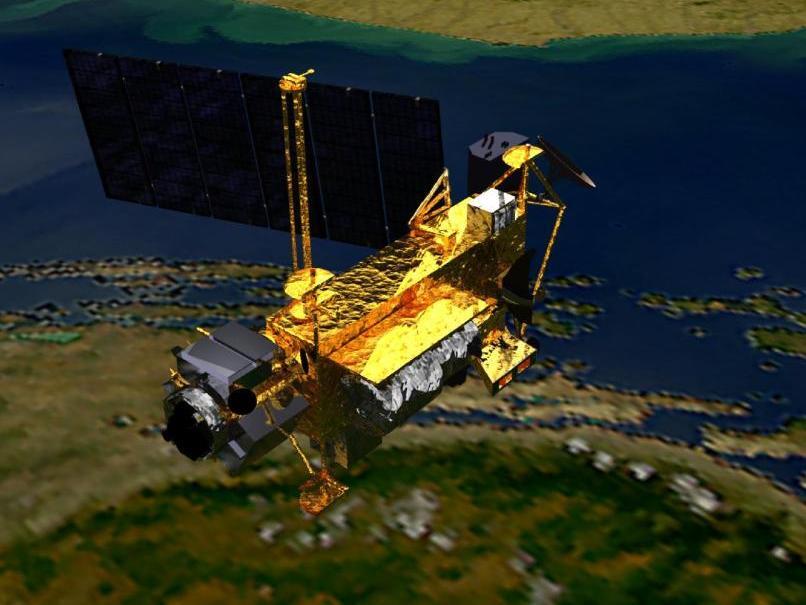 This artist's conceptual image shows the Upper Atmosphere Research Satellite, or UARS. After two decades in orbit, the satellite will make an uncontrolled re-entry into the Earth's atmosphere.

"That 1 in 3,200 is the probability that someone, somewhere on the Earth will be hit by a piece of debris of sufficient size to cause injury," says Matney.

But Matney says your own personal risk of being hit by a piece of this satellite is far lower: "It's something like one in trillions, for any one person."

And he says these days, NASA spacecraft have to meet standards that lower the risk even more. For example, sometimes they're designed to be steered down into the ocean. But this satellite was launched before that policy took effect.

Space junk falls back to Earth all the time, says Matney, and usually no one notices. Large objects the size of this satellite return about once a year.

This one is getting advance publicity because it's the biggest NASA satellite to make an uncontrolled re-entry in about three decades. NASA will be announcing the latest predictions on this re-entry as they become available.

"If you're lucky enough to be near the re-entry at nighttime," says Matney, "you should see a spectacular show."