Accessibility links
Syd Mead, Still Designing The Future After 50 Years The "visual futurist" who helped create the worlds of Tron, Alien, and Blade Runner is envisioning the future again in Neil Blomkamp's upcoming Elysium. NPR's Steve Inskeep talks to him about where his ideas come from — and why Google is a great help.

Look around. There's a good chance you'll spot a tablet computer, if you don't have one yourself. Touch-screen phones are even more common. Biometric scanners scan your fingerprints at your bank, or your irises at the airport. They're devices that used to be the stuff of science fiction — the sort of thing you'd see in Star Trek or Blade Runner or Minority Report. Now they're here in the real world. And they're everywhere.

How did so many films and TV shows get so much right about what was coming down the technological pipeline?

'You Could Use A Guinness': Iris scanners track movements — and serve targeted marketing to each individual — in Steven Spielberg's Minority Report.

Syd Mead, the Hollywood "visual futurist" who helped design some of those film worlds, has made a career of it. (He coined the term, in fact. "It's a bumper-sticker title I invented" so he could work in a regimented film-lot culture that didn't really have a label for what he did.)

He tells NPR's Steve Inskeep that as with most everything in the movies, it starts with the script — the "idea generator" that sets the boundaries for his work with the director and the production designer.

Of course these days, he says, "Google is a godsend."

"You download different research tracts on that specific subject and find out that we're implanting cameras in people's eyes now," Mead says. "They're working on artificial nanoscale retinas. And so you start with that technology leap, or possibility, and then you design around that. To me, science fiction is reality ahead of schedule."

Take Minority Report, in which eye scanners track citizens through a crowded public setting, serving up personalized advertising come-ons. That might have seemed a stretch in 2002, when the movie (based on a Philip K. Dick story from 1956) came out.

Not now. Iris scanners monitor traffic at sensitive locations from airports to Afghan checkpoints to Google data centers. Facial-recognition technology is deployed everywhere from Facebook to Apple's iPhoto software to your local DMV.

"If something is a good idea, then it will probably come true," Mead says, "either because of economic pressures, or just simply invention. Technology tends to climb on its own past accomplishments. If you've solved three or four problems, you can probably solve eight more." 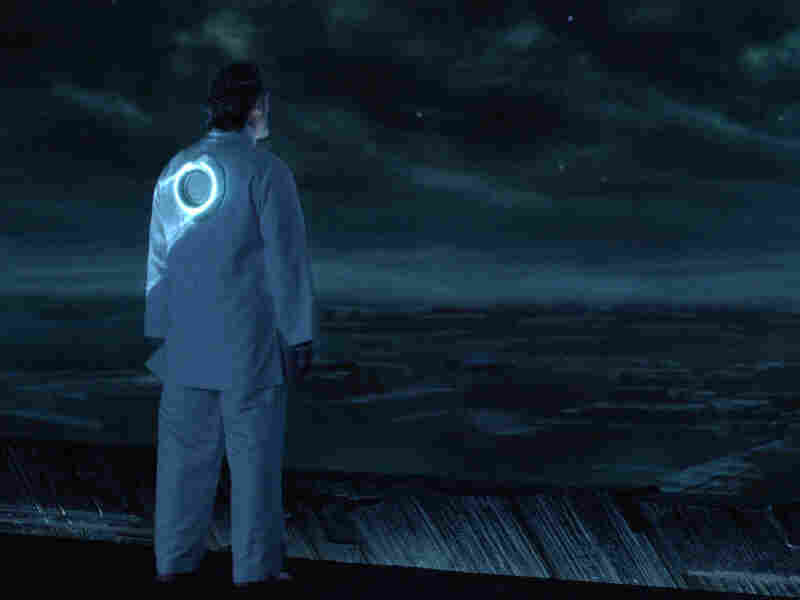 Disc-Driven: The famous "identity discs" in Tron — also from 1982 — got a sleek update in Tron: Legacy (with Jeff Bridges, above). Ironically, as visual futurist Syd Mead notes, technological reality has outstripped the fantasy: Nowadays, nobody needs a disc to track you and your data. Disney Enterprises Inc. hide caption

'It Is Sort Of Frightening'

Defining "good idea" isn't always easy, though. The Minority Report technology that targets advertisements to its hero's specific desires also (and not incidentally) feeds information about location and identity to a central authority. In Tron, the 1982 cult classic about a man who gets uploaded into a computer network, the characters carry "identity discs" that capture "everything [they] do or learn."

The only thing out of date about that, some would argue, is that the corporations and government organizations tracking your behavior nowadays don't even need you to carry a disc.

"Your personal information is tracked 24 hours a day," Mead agrees. "Every time you go to the bank, every time you swipe your credit cards, that is remembered by some system or other. ... Cellphones: By triangulation, they know where you are all the time you're using your phones. So it is sort of frightening."

Indeed, when you think about it, a lot of science fiction puts some pretty dazzling technology into the hands of some pretty ruthless people: nefarious criminals, totalitarian governments. It's a distinctly dystopian approach to the connected life.

Mead isn't entirely a pessimist, though.

"The critical thing is that technology, when it becomes widespread, is not owned by a top-down agency," he points out. "What's driving the revolution of social response in a lot of the countries around the world is [that] more people have cellphones, they have Facebook accounts, Twitter accounts. They can access the information outside the closure that their political environments impose on them. And that's a very comforting thing."

There's an analogy Mead likes to use: "A knife is a very dangerous object if you use it as a weapon," he notes, "but you can bone a duck and create a delicious gourmet dish."

Cold comfort to the duck, of course. But then, "ducks don't have a political base," Mead jokes.

The larger point, he says, is that technology itself is amoral. "Technology is invented, and it goes into the broad universe, where it does neat things or horrible things."