Accessibility links
What Role Will Islamists Play In Libya? The Muslim Brotherhood is among the factions seeking to play a role in the new Libyan government. But moderate Libyans say they do not believe Islamists will become the dominant force in the country. 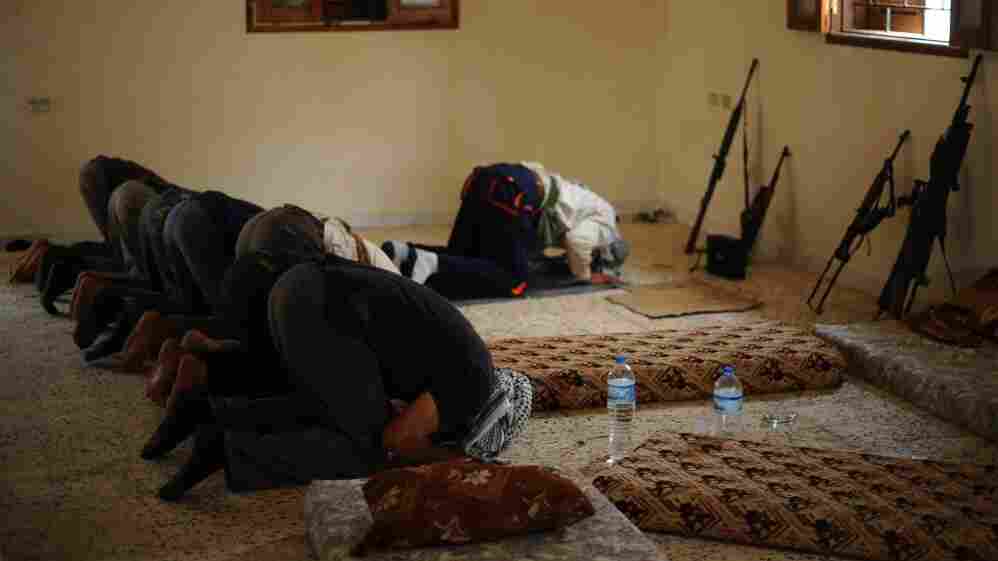 Libyan rebels pray before going out on patrol outside the port city of Misrata on April 30. Religion plays a major role in Libyan life, and Islamist groups want to be part of the new government. Christophe Simon/AFP/Getty Images hide caption 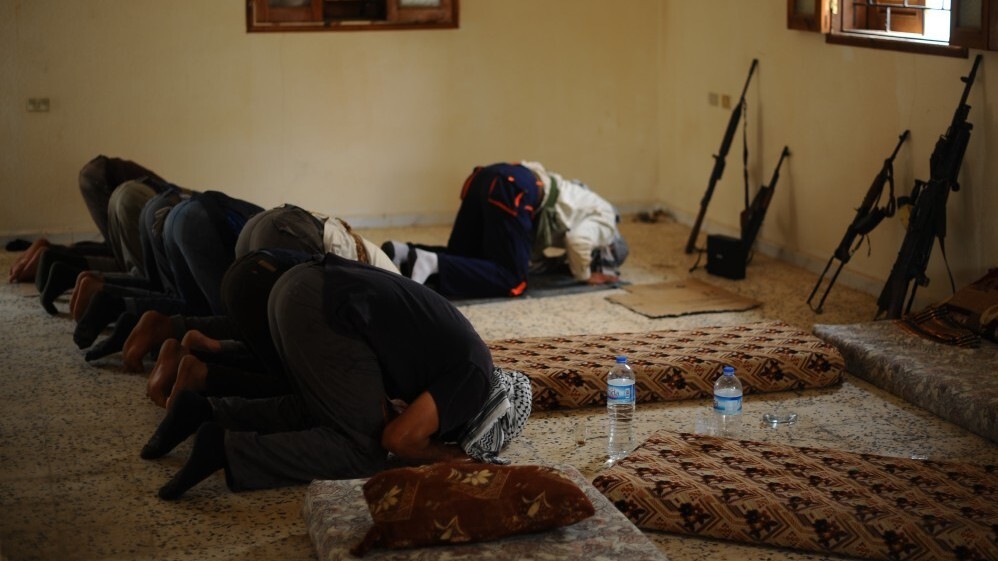 Libyan rebels pray before going out on patrol outside the port city of Misrata on April 30. Religion plays a major role in Libyan life, and Islamist groups want to be part of the new government.

As Libyans work to form an interim government, some of those competing for power are members of the Muslim Brotherhood, raising fears that Islamist radicals may try to hijack the revolution. But many Libyans say those fears are mostly in the minds of Westerners.

Former Libyan leader Moammar Gadhafi banned the Muslim Brotherhood. The group attempted to overthrow Gadhafi in the 1990s, and he responded with a ferocious crackdown that put many of its members in jail.

Members of the Muslim Brotherhood have been involved in the current revolution since it began in February, and group members generally say they want a state governed by Islamic law and institutions.

One of the most prominent members of the Muslim Brotherhood is Amin Belhaj, who also belongs to the Transitional National Council, the group that is currently running the country.

Belhaj says Islam should pervade every aspect of Libyan society, especially its government.

"This government should understand Islam as we believe. That's what we want," Belhaj says. That, he says, means justice and equality under Islamic law. Belhaj says his views on social values differ very little from those of conservative Christians in the United States. By Libyan standards, he says, those views are not extreme.

Islam already pervades life in Libya, as ubiquitous as the call to prayer, when men stream into Tripoli's mosques.

Thank God we are not radicals here. Most people know that the Taliban and al-Qaida are anti-Islam, because in our belief, you cannot kill people, no matter who they are.

Most women wear clothing that cover everything except their faces and hands, and Libyans generally hold conservative opinions on many social issues.

Mustafa Abdul-Jalil, the head of the Transitional National Council, said at a recent rally that Shariah, or Islamic law, should be the main source of Libya's laws. He added that Libyans will not accept any extremist ideology, either to the right or the left.

Ali Tarhouni, an economist who serves as deputy prime minister on the council, agrees that Libyans favor a moderate form of Islam, but acknowledges that extremism is a concern.

"This version of radicalization, I think that's an issue that we are concerned about and we talk about it openly," he says. "But so far, regardless of what you see, I'm not too worried about it."

Tarhouni and other members of the TNC were recently denounced by a prominent Muslim Brotherhood cleric as "extreme secularists."

Tarhouni and others have dismissed that as rhetoric, part of the back-and-forth of political maneuvering.

Mohammed Saleh Abdul Jalil Sabur, the imam of one of Tripoli's main mosques, says the clergy should stay out of politics, but he also believes that Libyans will resist extremism.

"Thank God we are not radicals here," he says. "Most people know that the Taliban and al-Qaida are anti-Islam, because in our belief, you cannot kill people, no matter who they are."

But Sabur says there is a place for the Muslim Brotherhood in Libyan politics, as long as they are not armed and not radical.

Brotherhood members say they believe that they can establish an Islamic state through democratic persuasion.

"Anyone who is [logical], he should believe that democracy is the best way to get to the freedom state, even to the Islamic state," says Belhaj, the brotherhood member who is part of the TNC

Khaled Zarrugh, a brotherhood member who spent eight years in one of Gadhafi's prisons, says it won't happen quickly.

"I don't expect the Muslim Brotherhood to lead the country, at least from the first. After two years from now, I don't think any party will lead the country. It will be, I think, share," he says.

He says the brotherhood is not that strong politically, but others say the group is the best organized and could win a significant number of seats in an election.

Zarrugh says his model for Libya is Turkey, where he says Prime Minister Recep Tayyip Erdogan has shown that Muslim conservatives and right-of-center politicians can win democratically and rule responsibly.

Right now, he says, the Muslim Brotherhood in Libya is just getting started.