Accessibility links
Brad Pitt: 'Moneyball,' Life And 'The Stalkerazzi' The veteran actor has played a Nazi-hunter, a vampire, a cowboy hitchhiker and the outlaw Jesse James. In his latest film, Brad Pitt plays the manager of baseball's Oakland A's. He tells Fresh Air's Terry Gross why the part interested him and what it's like to live life in the public eye. 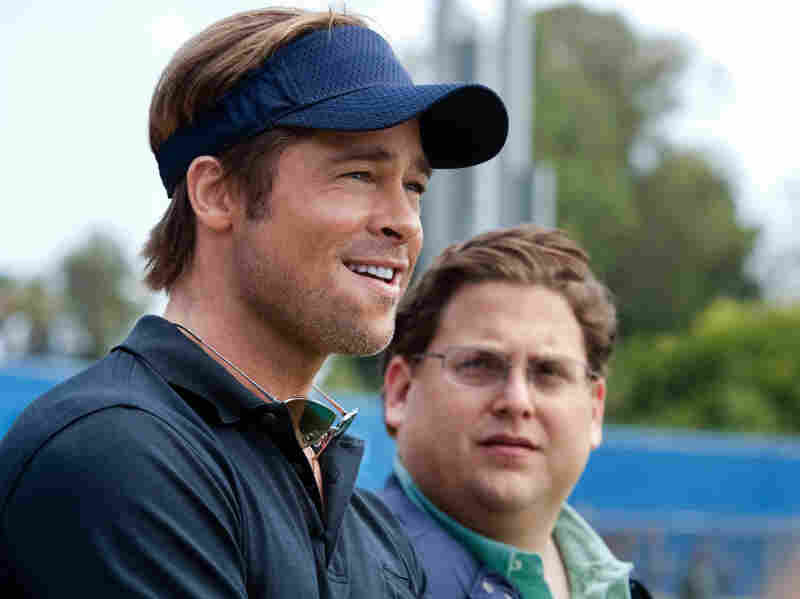 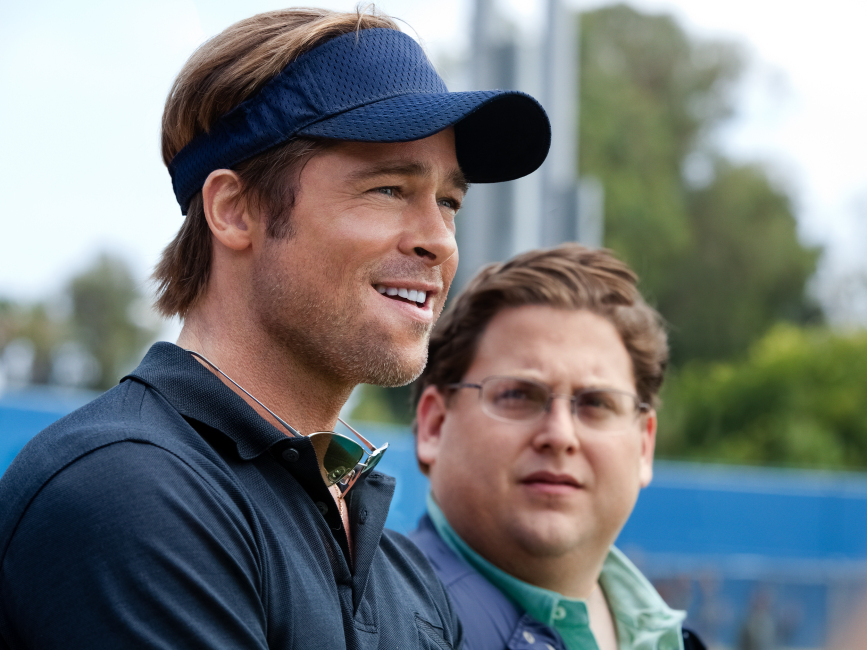 Brad Pitt, left, plays Billy Beane, the general manager of the Oakland A's, in the movie Moneyball. His assistant Peter Brand is played by Jonah Hill.

Brad Pitt is aware that his portrayal of a baseball-team manager in the new film Moneyball is somewhat different from his previous roles. After all, the actor has played a Nazi-hunter, a vampire, a cowboy hitchhiker, a detective on the trail of a serial killer, the Greek warrior Achilles, a terrorist, an assassin and the outlaw Jesse James. He has ridden on horseback and dodged both flying glass and flying fists for physical roles in movies like Troy, Mr. and Mrs. Smith and Fight Club.

By contrast, Pitt spends most of Moneyball sitting in a chair and making deals over the phone with other baseball teams. The movie, based on the 2003 Michael Lewis book, stars Pitt as Billy Beane, the general manager of the Oakland A's. In 2002, Beane figured out how to use analytics and statistics to compensate for his team's payroll, which was relatively small compared to what other major-league teams had to spend — and won 20 games in a row to set a new American League record.

Pitt tells Fresh Air host Terry Gross that as soon as he read Lewis' book, he knew he wanted to make Moneyball into a film.

"I was taken with these guys who out of necessity had to challenge the conventional wisdom of their industry," Pitt says. "They were a team [with] a payroll of $38 million, and they're playing against teams that have $120 million with another $100 million in reserves. And there's no way to have an equal fight. So what these guys had to do was re-question baseball and baseball knowledge. They had to take everything apart and start over again."

Pitt also served as one of the film's producers. He says he looked to Beane, who still works for the A's, for insight into how to separate his dual roles on set. Beane is famous for making personnel decisions for the A's but not watching his team play because he can't bear the suspense of possibly seeing them lose.

"He describes it as not wanting to make an emotional decision — that when he watches, he gets too involved — and he wants to understand the process and the outcome of that process, and then make a clear, level-headed decision afterward," says Pitt. "I watch the films during the editing process over and over again, and I can distance myself from the actor up there. I know when something's working or when it's not working." 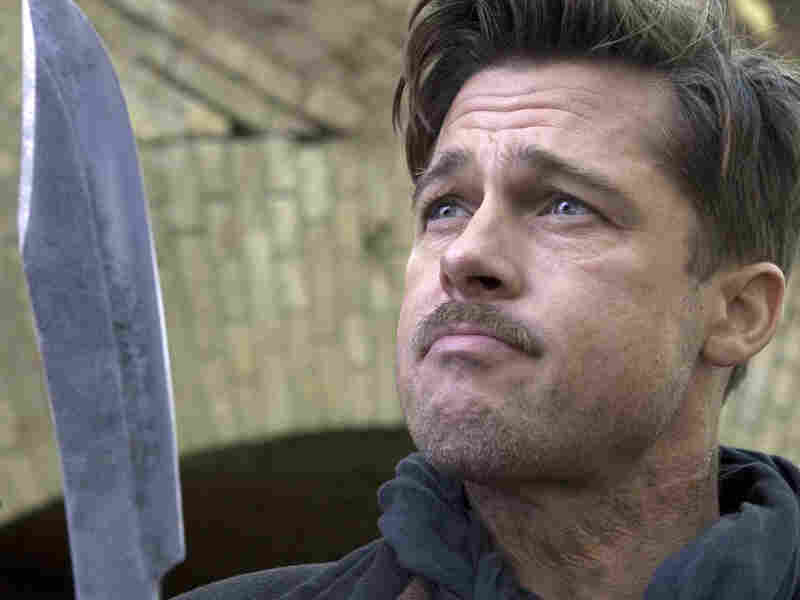 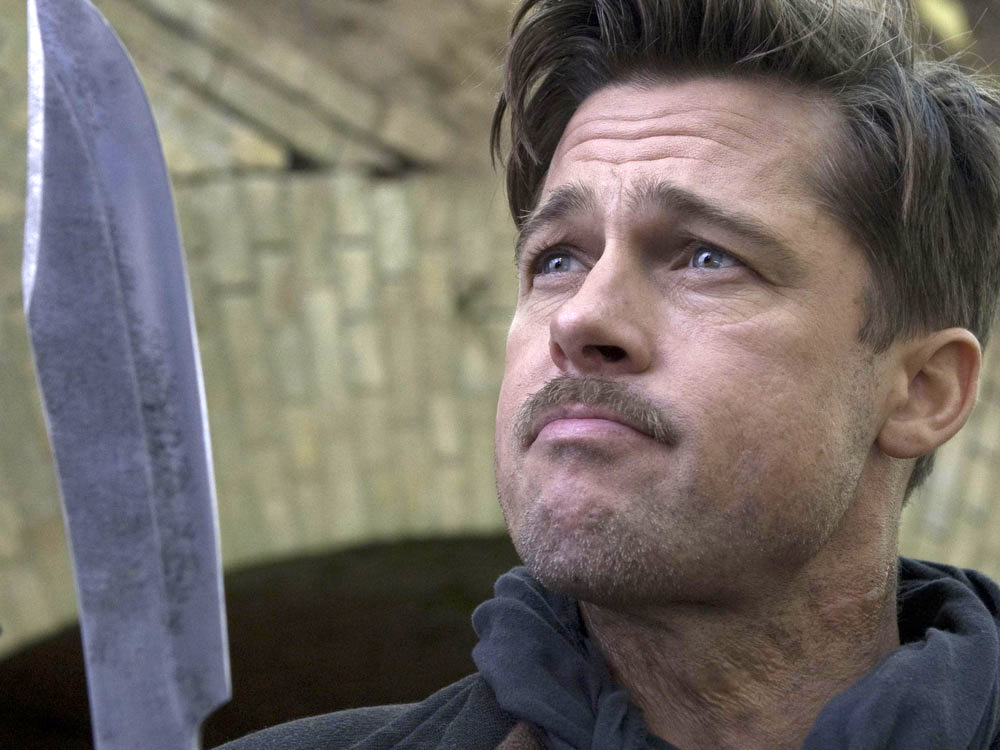 Pitt began his own acting career in 1987, with roles on TV shows like Growing Pains and Dallas. His first film appearances, in 1991's Thelma and Louise and 1992's A River Runs Through It, helped pave the way for larger roles in films like Interview with the Vampire, Legends of the Fall, Seven, Sleepers and Fight Club.

In 2009, Pitt starred in Quentin Tarantino's film Inglourious Basterds as Nazi hunter Lt. Aldo Raine. Raine famously had a scar on his neck that looked like he had been slashed or strangled by a wire. But if you're curious about its origins, Pitt says you might have to wait awhile.

"[Tarantino] said it would never be explained in [Inglourious Basterds] and if he ever does what he called a prequel-slash-sequel, then we'll reveal it then," he says. "He talks about [a sequel], but he's got several things percolating at once."

As for his own career? Pitt says he's not sure yet what he'll do next.

"I want to keep mixing it up," he says. "I find that the next film is always informed by the last film you finish."

On his childhood religious experiences

"It was Sunday school and do good and Bible study and daily prayer. But it was always something I wrestled with personally. I was very curious about the world even at a young age, and I don't know at what point I became aware that other cultures believed in different religions, and my question was, 'Well, why don't they get to go to heaven then?' And the answer was always, 'Well, everyone gets a chance — meaning at the word of God as it was described to me then. And that didn't sit well with me then. But in times of trouble or discord, it's a great comfort. And it wasn't till I left home that I really came to the conclusion that it didn't make sense to me for many other reasons."

On leaving religion and finding comfort

"Within time, you get comfortable with yourself and with the unknown — that we're not going to know until that time comes. And that's enough for me. I wrestle with this a lot even now because I don't want to step on anyone's religion. My family is still very dedicated. At the same time, I take great issue with it when it starts defining policy or ultimately becomes separatist. ... It's been the basis of our main conflicts throughout history."

On going to L.A. two weeks before he was supposed to finish college

"I knew where I wanted to go. I had a direction. I always liked those moments of epiphany, when you have the next destination."

On his favorite films

"I loved Saturday Night Fever when I was a kid. I couldn't believe people talked that way. It was just a whole new culture I didn't understand. I snuck into it. It was an R-rated film. So it holds a special place. The films on my playlist today would be Dog Day Afternoon. [One Flew Over the] Cuckoo's Nest was a huge one with me. I would say [Dr.] Strangelove always cracks me up."

On selling photos of his children to raise money for charity

"I know some of these guys who are in that 'stalkerazzi' world, and you really have to separate them from the paparazzi in our industry. That's another breed. They have their heroes who got the big, scandalous shot, which just promotes more of that. It's a very strange thing to be selling photos of something that's very intimate and personal. And those of which you want to protect. We have to plan an escape every day just to get out of the house — kind of a Mission Impossible with decoys, and that's the life we live in, and that's the one we asked for. But we knew there was a bounty on our head ... and we know the lengths they go to to get that shot. So we figured, 'Let's cut it off in the beginning,' and instead of that money going to people I do not respect, we would make some good out of it."