Accessibility links
The Fed's Latest Moves May Fall Flat, Experts Say The Federal Reserve has announced a plan to drive long-term interest rates even lower. But with borrowers still too cautious to take on additional debt, will the move have a positive effect? Some experts say they're not holding their breath. "The Fed can only do so much," one analyst says. 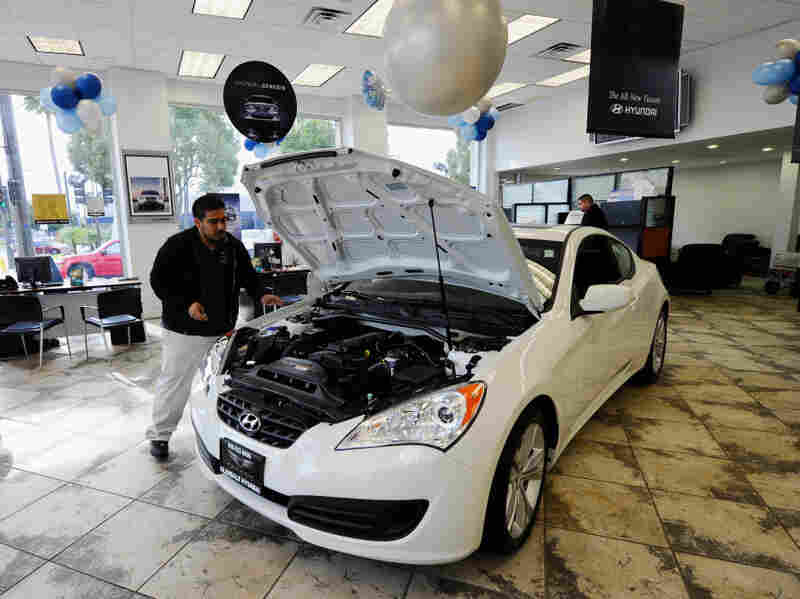 Despite the availability of cheap loans, in some places, people are cautious when it comes to buying new cars. Here, workers display a car at a California Hyundai dealership earlier this year. Kevork Djansezian/Getty Images hide caption 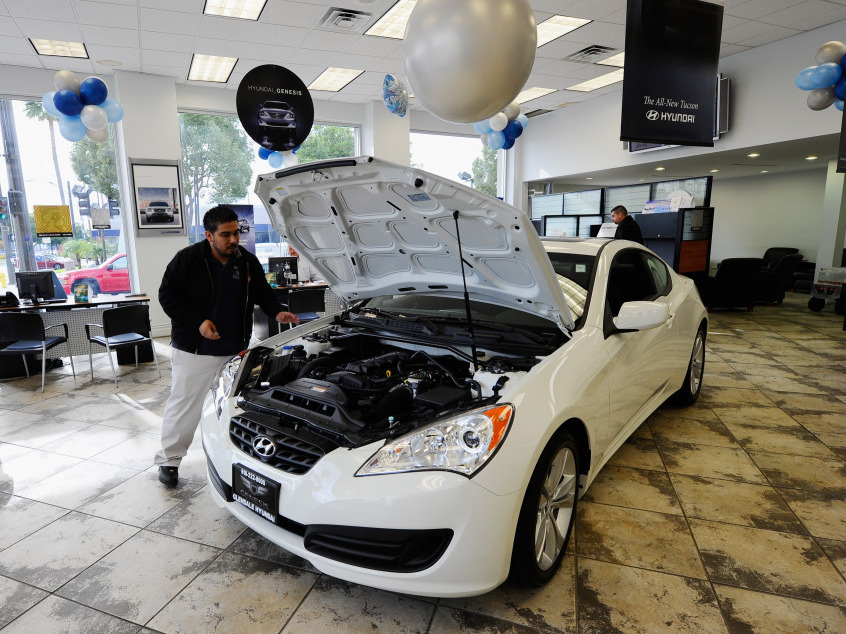 Despite the availability of cheap loans, in some places, people are cautious when it comes to buying new cars. Here, workers display a car at a California Hyundai dealership earlier this year.

With the White House and Congress at loggerheads over how best to help the U.S. economy, some have pinned their hopes on the Federal Reserve to help fill the void.

Fed Chairman Ben Bernanke says the central bank still has a range of tools it can use to prop up the economy. But Greg McBride of the financial website Bankrate.com is not holding his breath.

"The Fed can only do so much," he said. "Their most effective tools are things that they have used up already. At this point, they've got a few options left, but none of them is a surefire way to either jump-start the economy or get people to borrow or get banks to lend. There's still a demand problem. And that is not something that the Fed alone can fix."

The stock market seemed unimpressed Wednesday by the Fed's latest efforts. The Dow Jones industrial average fell more than 280 points after the Fed announced an effort to push long-term interest rates even lower.

When you lower interest rates, that creates an incentive. But there's no guarantee that a firm is going to act on the incentive.

The agency used its primary tool long ago: pushing short-term interest rates about as low as they can go. That's why you can find a car loan for less than 3 percent, for example, at lenders like the Oshkosh Community Credit Union in Wisconsin.

Loan officer Kathy Steiner says that even with all the cheap money available, people are still cautious when it comes to borrowing for a new car.

That same kind of caution may limit any positive impact from the Fed's latest effort to lower long-term interest rates. University of Oregon economist Mark Thoma says cheap business loans don't help much if companies are too nervous to take on additional debt.

"You can lead the firm to water, but you can't make them drink it. When you lower interest rates, that creates an incentive. But there's no guarantee that a firm is going to act on the incentive," he said. "And one of the problems the Fed faces right now is getting firms to actually bite when they lower the interest rates."

'I Have Got To Make This Last'

Meanwhile, the Fed's effort to make life easier for borrowers is creating all sorts of headaches for savers. Sally Inman and her late husband socked most of their life savings into certificates of deposit when they retired. They were counting on the interest to help cover expenses when they quit working and moved to Mesa, Ariz.

"When we first started, we were getting probably 5, 5.25 percent. It was really good," she said. "Now it's like 0.1 [percent] if we're lucky. It's just like not having any interest. You earn smidgens of $2 here or $4 there. It's just ridiculous, and it's very, very difficult."

Inman says she's not about to gamble with her money by putting it into the stock market. But the 69-year-old says she's worried about how long her savings can hold out.

"If I'm like my grandmother, she died just before her 100th birthday. Longevity is in the family. So I have got to make this last," she said. "And it scares me."

The Fed has long been faced with competing goals of keeping prices steady and fighting unemployment, so it's often caught in a kind of tug of war. Top Republicans have accused the central bank of doing too much to goose the economy at the risk of triggering inflation. Some Fed policymakers who share that view dissented from Wednesday's action. But economist Thoma doesn't believe the Fed is being overly aggressive.

"From my perspective, the Fed really hasn't put enough effort into job creation," he said. "They really ought to respond stronger to the job creation part, the unemployment part, than they have so far in this crisis."

Thoma says he's less worried about the price of groceries going up a bit than he is about people who have no paycheck to buy groceries at all.