Accessibility links
'You Betcha!': A Palin With A Mr. Hyde Side An acerbic and controversial documentarian whose former subjects include Heidi Fleiss and Courtney Love turns his camera on the onetime vice-presidential candidate — and comes away with a portrait of a thin-skinned, divisive personality unable to tolerate dissent. (Recommended) 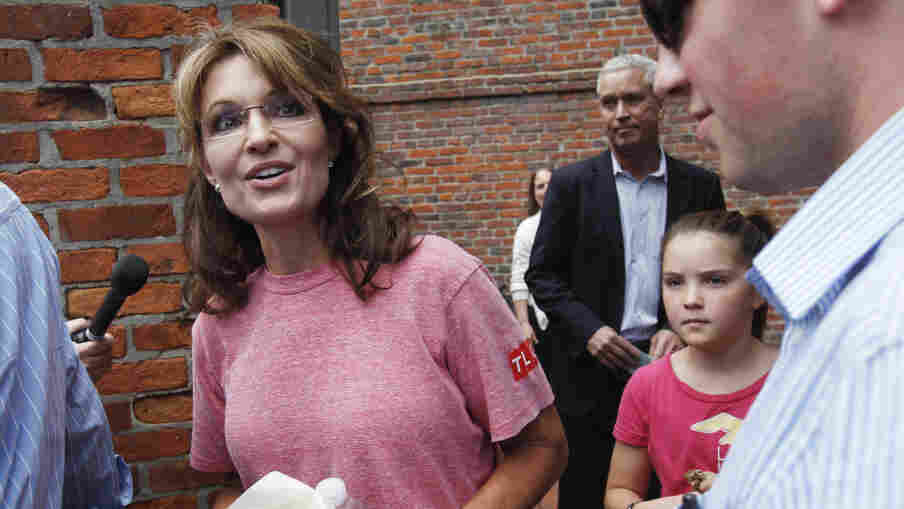 Former Alaska Gov. Sarah Palin is the subject of a critical portrait by the acerbic documentarian Nick Broomfield, known for his gonzo portraits of the famous and the controversial. Steven Senne/AP hide caption

From 'Sarah Palin: You Betcha!' - 'She Wasn't Listening'

If you'd never heard of Sarah Palin before you saw Nick Broomfield's documentary about her, here's what you'd learn:

In other words, not much that's new. Never one to take a back seat in his movies, Broomfield projects a shambling, Columbo-style bonhomie that gains him access to people who should be very afraid of letting him cross their threshold. Slipping and sliding his way around Palin's icebound hometown of Wasilla, — population 6,000; 76 churches; crystal meth capital of Alaska — in plaid jacket and flapped hat, a sound boom clutched in hand, the British director charms his way into the modest home where Palin grew up. There, her genial father, Chuck Heath, proves a stalwart Palin booster, while conceding that even as a child she never lacked for competitive drive. 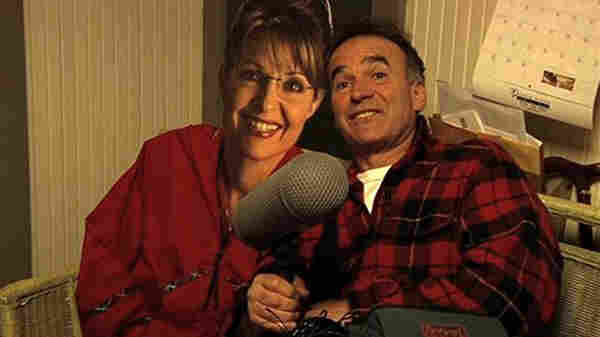 Broomfield, who moved to Palin's hometown of Wasilla, AK, while making the film, was ultimately unable to secure an interview with the former Republican vice-presidential candidate — so he appears with a cardboard stand-up of her in his documentary. Freestyle Releasing hide caption 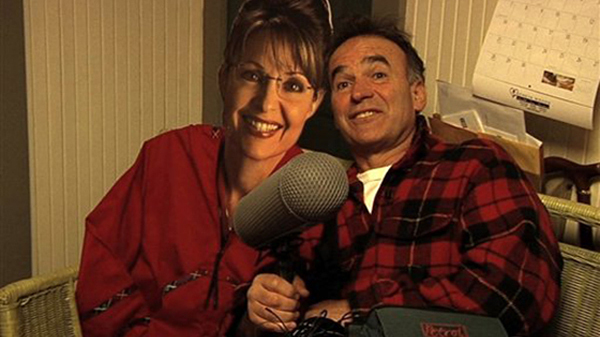 Broomfield, who moved to Palin's hometown of Wasilla, AK, while making the film, was ultimately unable to secure an interview with the former Republican vice-presidential candidate — so he appears with a cardboard stand-up of her in his documentary.

In short, Broomfield is a cheerfully kinky guy. But as it turns out, there's very little personal dirt in Sarah Palin: You Betcha! that wouldn't be upstaged by Joe McGinniss' recent Palin tell-all, unless you count some potentially unreliable testimony about her parental shortcomings from her former brother-in-law, a state trooper she tried to have fired during her short stint as governor of Alaska.

If anything, Broomfield is amused by the smut machine that surrounds most public figures today: In a moment of pure black comedy, we hear him telling an agent for Palin's former son-in-law, Levi Johnston, that he can't afford the $20,000 that is apparently Johnston's going rate for the inside scoop on the Palin family's sexual proclivities.

It's not that Broomfield disapproves of dish, or has no sympathy for marginal behavior — his oeuvre offers proof that he's drawn to the absurd and the seamy. But one gets the sense that he is genuinely appalled by Palin's political shortcomings: the seeming gap between her religious beliefs and her own behavior, her failures as mayor of Wasilla and governor of Alaska, as well as what comes across as her preternaturally vengeful nature.

After traveling to Egypt to chat up the lone former classmate who was willing to talk about her on camera (the word is not good), Broomfield rounds up a posse of operatives who worked for her, plus a few intrepid types who dared to oppose her openly. To a man (and woman), they offer appreciations of her personal magnetism before launching into bitter accounts of how thoroughly she shafted them for real or imagined slights. The Sarah Palin that emerges from this collective testimony is consistently thin-skinned, mean, paranoid, divisive, lazy and far more obsessed with settling scores than with the daily grind of governance. More than one former ally fears that Palin would be trigger-happy with the nuclear button were she to gain the Oval Office.

For his part, Broomfield worries more about what he sees as her ignorance, her inability to tolerate dissent and her unwillingness to engage in public debate. To him, that — combined with her enormous skill at whipping up a like-minded crowd — speaks volumes not just about Palin but about the cynical political culture that invited her to draw close to the White House, then kicked her to the curb when she got out of hand. If or when Palin finally decides to run for president, Broomfield suggests, American democracy itself will be at stake. (Recommended)