Accessibility links
Funding Fight Trips Up Bike Path Projects More cities nationwide are investing in ways bikes and pedestrians can share the road with cars. Still, the projects have been slow to catch on in other places, most notably in Congress, where some lawmakers feel these and other "transportation enhancements" are not an appropriate use of federal dollars. 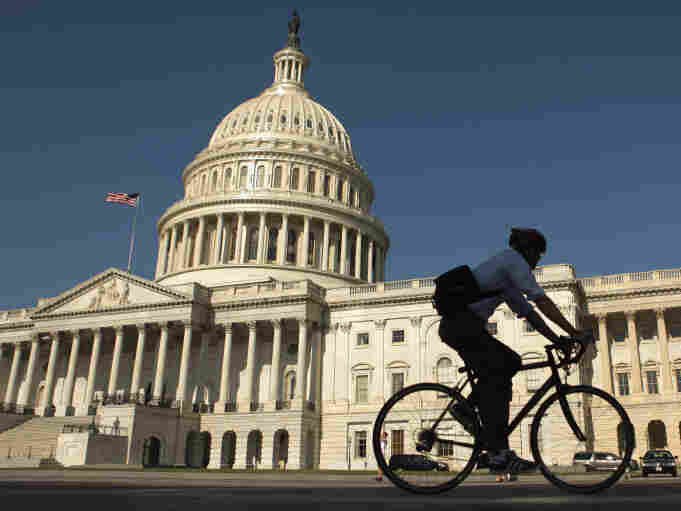 Cities across the country are investing more money in infrastructure to make roads safer for bikes. Last week, a highway bill faced resistance from lawmakers who saw those kinds of projects as an inappropriate use of federal funds. Chip Somodevilla/Getty Images hide caption 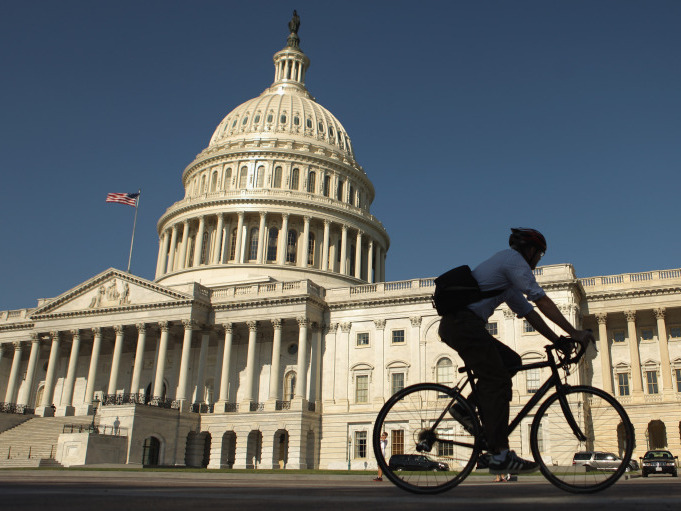 Cities across the country are investing more money in infrastructure to make roads safer for bikes. Last week, a highway bill faced resistance from lawmakers who saw those kinds of projects as an inappropriate use of federal funds.

The corner of 15th and K streets in Washington, D.C., is busy. Buses, trucks, cars and taxis zip by. There are pedestrians and, increasingly, bikes.

Some 57 million adults ride bicycles in the U.S., whether for commuting or exercise or fun. Cities are adding bike lanes with the help of a federal program that gets its money from the highway bill. Some Senate Republicans tried — and ultimately failed — to block funding for that program, which also pays for sidewalks and other pedestrian improvements.

Andy Clarke, president of the League of American Bicyclists, bikes up 15th Street in Washington in bike lanes sectioned off from the other traffic.

"If we were in Portland or Amsterdam ... we'd have our own set of traffic signals, and there'd be a little more space here," he says, "but, you know, these are early days, and we're not Amsterdam yet. We don't have quite that many cyclists, but it's certainly noticeable the increase in the last year or two as the infrastructure has gone in."

Clarke says the move by Congress was hard to take because cities nationwide are spending local, state and federal funds on these kinds of projects.

"It seems just bizarre to be stopping it and discouraging it when it's got so many benefits," he says.

Washington is hardly alone in marking off bike lanes in its streets; New York has done it, as have Seattle and Minneapolis and any number of cities across the country.

It's been slow to catch on in other places, most notably in Congress, where some lawmakers feel these and other "transportation enhancements," as the government calls them, are not an appropriate use of federal dollars.

The Senator Who Could Have Shut Down The FAA

As America Ages, A Push To Make Streets Safer

Republican Sen. Tom Coburn of Oklahoma tried to strip the program from a temporary highway bill last week. His GOP colleague, Rand Paul of Kentucky, joined him in speaking out against bike trails.

"Look, I'm a bicyclist, and I like bike paths as much as anybody," Paul said, "but when bridges are falling into the river, when a major metropolitan area like Louisville, Ky., has one-third of their bridge capacity closed down because the bridge is dangerous to travel on, these are emergency problems."

A deal in the longer-term highway bill convinced Coburn not to block the bill last Thursday.

Backers of the infrastructure point out that the amount of spending on bike paths and pedestrian improvements amounts to about 1.5 percent of transportation spending — a tiny fraction of what's needed to pay for bridge repairs, and not what's keeping those bridges from getting fixed.

David Goldberg of the advocacy group Transportation for America calls this is a "watershed moment," as communities revert to an earlier time when roads weren't owned by cars.

"We stripped [roads] down to be essentially sewers for cars, and for years we thought the throughput of vehicles was the be-all and end-all," he says. "There's been a significant change in recent years where cities, towns, large and small, are taking a very different approach, and they're going back and reclaiming a little bit of that landscape."

It's not just bike lanes that are funded by the transportation enhancements program. Pedestrian improvements such as sidewalks and better-marked crosswalks are also funded. In part, Goldberg says, the money is being spent to reduce pedestrian deaths, most of which occur on roads built to earlier federal guidelines without proper crosswalks, for example, that are unsafe for pedestrians and other users.

"This is a national issue of having created safety problems in community after community, where we need to go back and give people safe ways to get out there, to be active, to get where they need to go," he says, "and this is not a frill, this is a very critical piece of our infrastructure."

It's not clear what lies ahead for the transportation enhancements program in the long term. Republicans in Congress want to give states the flexibility to opt out of it, and that worries safety advocates who say that without prodding from Washington, some states will focus only on cars to the detriment of everyone else on the road.