Accessibility links
Movie Review - 'Weekend' - Two Men, One Emotionally Charged Weekend On The Town Two men (Tom Cullen and Chris New) meet at a nightclub one Friday and spend the next 48 hours together, falling fractiously and perhaps ill-fatedly in love. 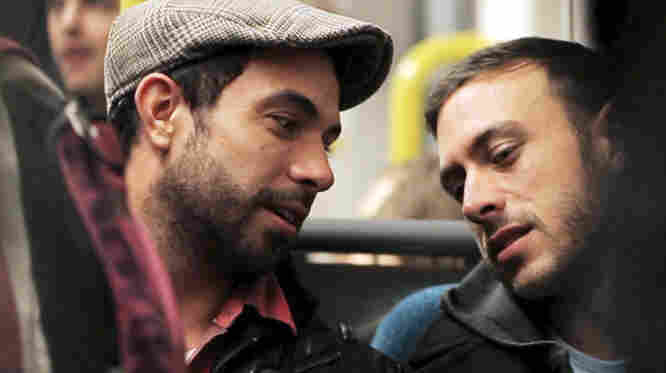 Russell (Tom Cullen) and Glen (Chris New) fall hard and fast for each other — but as they grow closer over the course of 48 increasingly intense hours, it's clear their stars aren't quite aligned. Peccadillo Press hide caption

Weekend, an achingly tender chamber piece from first-time director Andrew Haigh, opens in the finest tradition of atmospheric British realism. The camera lingers on the bleak anonymity of a high-rise housing project edged with brave patches of green, then sweeps us up to the 14th floor of this concrete monstrosity, where lives a great soul yearning for completion.

In his cramped but cozy flat, handsome, bearded Russell (Tom Cullen) puts on new sneakers in preparation for dinner at the home of his best friend, Jamie (Jonathan Race), and his wife. The company is jolly and welcoming, but Russell's sensitive features betray a sense of marginality, possibly self-imposed. On his way home, he stops at a gay bar and picks up Glen (Chris New), an artist. They spend the weekend together, on and off. That's pretty much it for plot, unless you count some fairly explicit sex, sprinkled with drug use and a little perfunctory socializing.

Mostly, though, the two men hole up in Russell's flat, gabbing wondrously about who they are and where they come from and what they want. And as they do, a rich world of longing, self-revelation and disappointment opens up between two strangers who, on the face of things, don't mesh on any level. 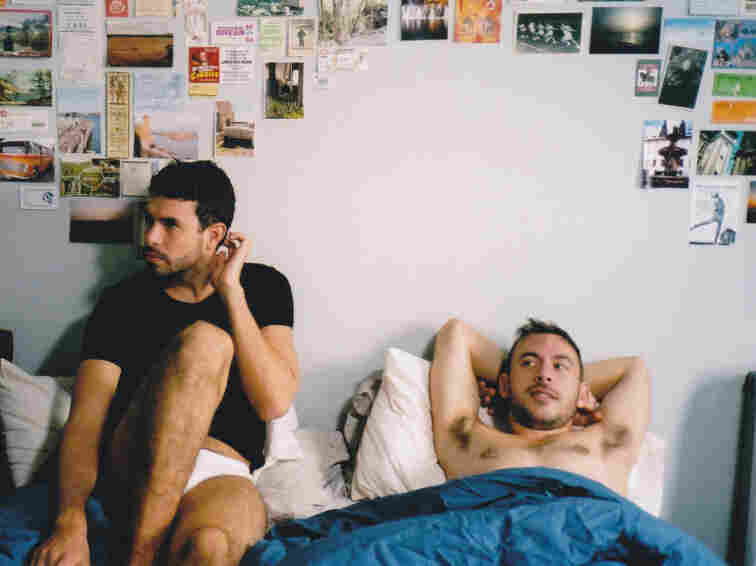 Andrew Haigh's intimate film puts its protagonists in bed almost immediately — and puts them through the wringer as they realize their connection is more than physical. Peccadillo Press hide caption 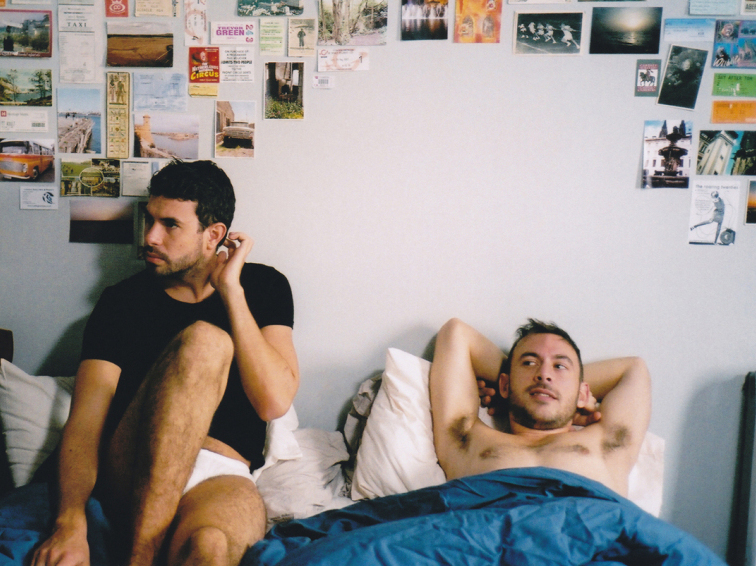 Andrew Haigh's intimate film puts its protagonists in bed almost immediately — and puts them through the wringer as they realize their connection is more than physical.

A friendly but private man who enjoys his work as a lifeguard at a local swimming pool, Russell has one foot dangling tentatively out of the closet but longs for a love he can call his own. Glen, who's been out since he was a teenager, is a bantam rooster perennially prepared for war; the art project he's working on is designed to confront straights with gay sexuality, but it's also his barrier against intimacy.

Russell speaks of love and happiness; Glen doggedly changes the subject to sexual technique. They're incompatible on every front except for the huge emotional charge between them — and the fact that, young as they are, each in his way strives to pick a path through life that feels true to himself.

Inevitably perhaps, Weekend will be tagged as a gay Brief Encounter, which is not so much wrong as it is reductive of what Haigh is trying to do. He neither denies nor privileges the particularity of gay life, though he does lift his characters clear of the tired types that clog most gay-themed films designed for a heterosexual audience. Filmed in the provincial city of Nottingham, Weekend is blissfully free of interior decorators playing acid-tongued besties to lovelorn straight women.

Not for Haigh the upper-crust refinement of a David Lean — he's another breed of romantic altogether, besotted with working-class grit. (So much so that he shot Weekend around the tower block that replaced the home where Albert Finney's philandering factory worker lived in the landmark Saturday Night and Sunday Morning.)

Nor does Haigh try to explain away his protagonists' sharply opposed natures. He touches lightly and without sentimentality on past events that may or may not define the men they have become, but always moves back to the relationship before us, cutting between long shots that emphasize their mutual loneliness and close-ups that invite us into the fractious, carnal, funny and finally loving company of two they invent for a moment.

What drives Russell and Glen apart is not a betrayal, or other commitments, or their poles-apart temperaments, but something simpler, more universal and more intractable: For this moment, and possibly forever, they want different things from life.

Haigh doesn't resolve that open question, but he's not inclined to tragedy, either. At the end, Glen and Russell have subtly exchanged gifts that go far beyond the package left in one bereft man's hands. And the off-screen wolf whistle as the two kiss on a railway platform suggests a cheeky hopefulness. Isn't it romantic?