Accessibility links
High Costs Make It Hard To Grow Young Farmers A high level of investment in agriculture is driving up land prices, making it harder for new farmers to afford their own. And banks simply aren't lending to higher-risk first-time farmers. Unless young people are left farmland by their family, they're out of luck, one banker explains. 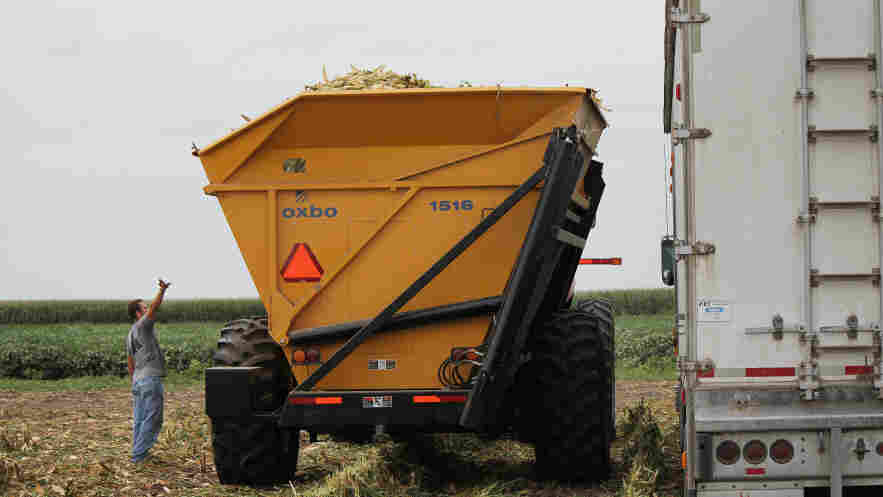 Austin Bruns, 25, watches as harvesters bring in corn crops on fields near his hometown of Beaver Crossing, Neb. Bruns currently rents land and would prefer to own, but banks aren't lending to high-risk new farmers. Clay Masters for NPR hide caption

In farm country, business is still booming. Commodity prices remain high, and investors are funneling millions of dollars into buying farmland, making it quite enticing for the would-be farmer who wants to leave the rat race.

But surprisingly, these factors make it that much harder for the next generation of farmers to secure the financing they need to get on the tractor. 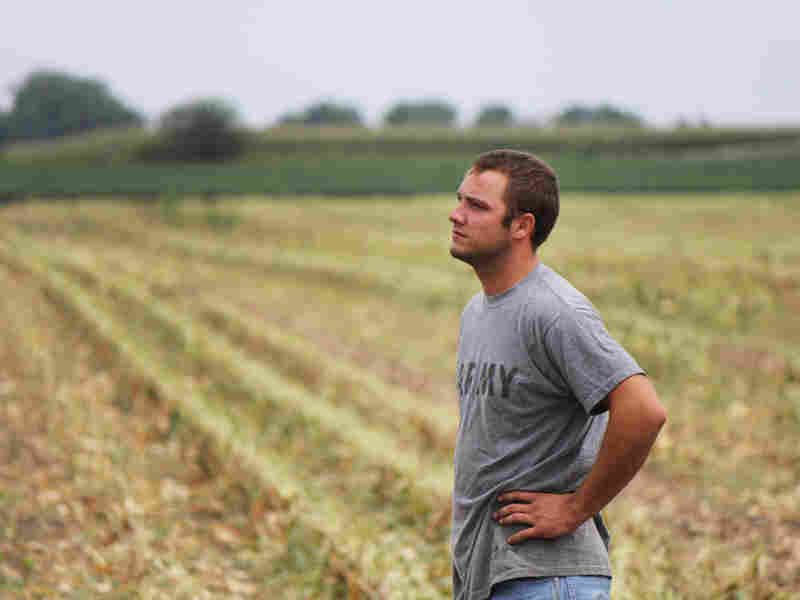 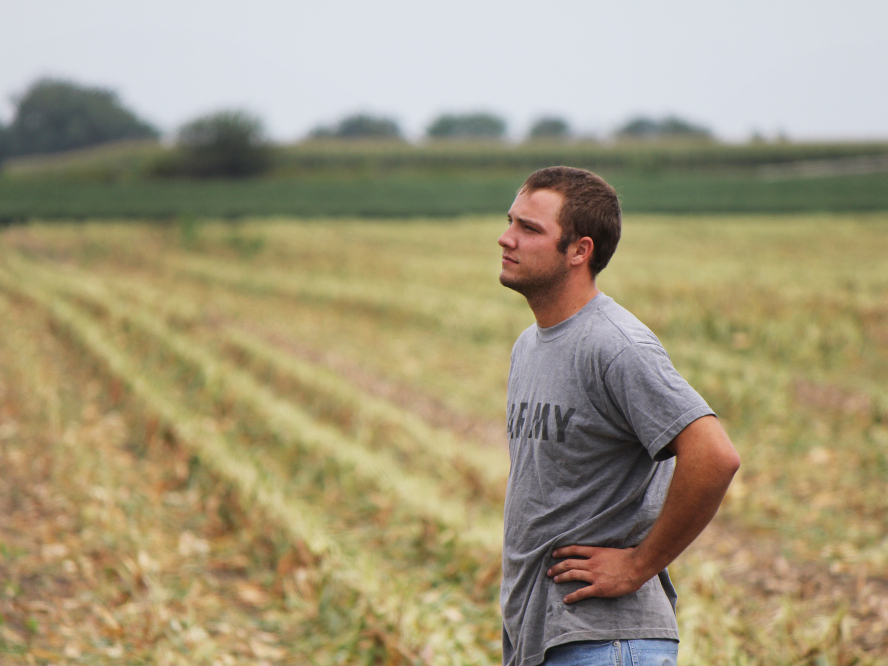 Austin Bruns stands on land owned by a contractor for Monsanto, an agriculture corporation. Bruns helps with seed corn production there, and also rents 150 acres elsewhere.

A High Cost To Start Out

Austin Bruns drives with his windows down on a dirt country road in a noisy 18-wheeler. He's towing tons of corn and has a little more than a five o'clock shadow, hinting at long days of an early harvest.

"When I graduated from high school, I didn't really have my sights set on anything; I knew I didn't have any [land] that I was going to come home and farm," Bruns explains.

So Bruns went to school to become a diesel mechanic and later joined the National Guard. Today, the 25-year-old rents about 150 acres in eastern Nebraska, where he grows soybeans and corn.

Bruns also works for area farmers who contract with agriculture giant Monsanto to grow seed corn. In these fields, the entire ear of corn is harvested for a nearby seed facility to use to develop next year's seed.

"You just can't afford to own everything yourselves anymore," Haser says. "It's your cost per acre. The initial cost is so high that you have to be able to spread this stuff out over more and more acres to make it worthy of being able to have it."

No Luck On Loans

When established farmers like Haser need a loan, they visit Utica, Neb., banker Larry Rogers. Rogers says that unless young people are left farmland by their family, they're pretty much out of luck.

"It has gotten more difficult with prices as they are today — even with the good prices for grain, I think it's more difficult for a young person to get started," Rogers says.

Ernie Goss, an economist at Omaha's Creighton University, says agriculture's appeal as an investment is one of the reasons for the drop.

"[Some people are] sitting in New York [and] saying, 'Well, I don't know, I've never even been to Nebraska, but by golly, I'm going to buy some Nebraska land,' " Goss says. "And you have these groups coming together ... that are buying farmland [and] driving up farmland prices to prices we've not seen before."

Goss says even though the Federal Reserve is keeping interest rates low for the next few years, banks simply aren't lending to high-risk first-time farmers.

Matt Wildman fits that profile. He's a 22-year-old University of Nebraska student about to graduate with a degree in agriculture economics. He wants to land a job with an agriculture company or start his own fertilizer business.

"The biggest challenge, at least in my position coming out of college with no assets to my name, pretty much, no money, and trying to get a loan for $50,000 or $80,000 or more just to start a business — it's not going to happen unless you have a co-signer," Wildman says. "My parents are willing to co-sign on something right now, but it's got to be something that's going to [have] cash flow itself — it's got to be able to work."

Veteran farmer Haser says most of his money is tied up in his operation and not accessible, so he has sage advice for any new farmer.

But it's only on paper that these established farmers appear rich. With today's high commodity prices they're not in the business of selling acreage, making it more difficult for young would-be farmers to work the land.

Clay Masters reports from Nebraska for Harvest Public Media, an agriculture-reporting project involving six NPR member stations in the Midwest. For more stories about farm and food, check out harvestpublicmedia.org.