Accessibility links
Obama's Jobs Bill Pitch: A Bridge To Nowhere? The president traveled to Ohio's Brent Spence Bridge on Thursday to help sell his jobs bill. He says if the country doesn't invest in its infrastructure now, it will pay later. While everyone agrees the bridge is badly in need of repair, Republicans say the president's jobs bill won't get it done. 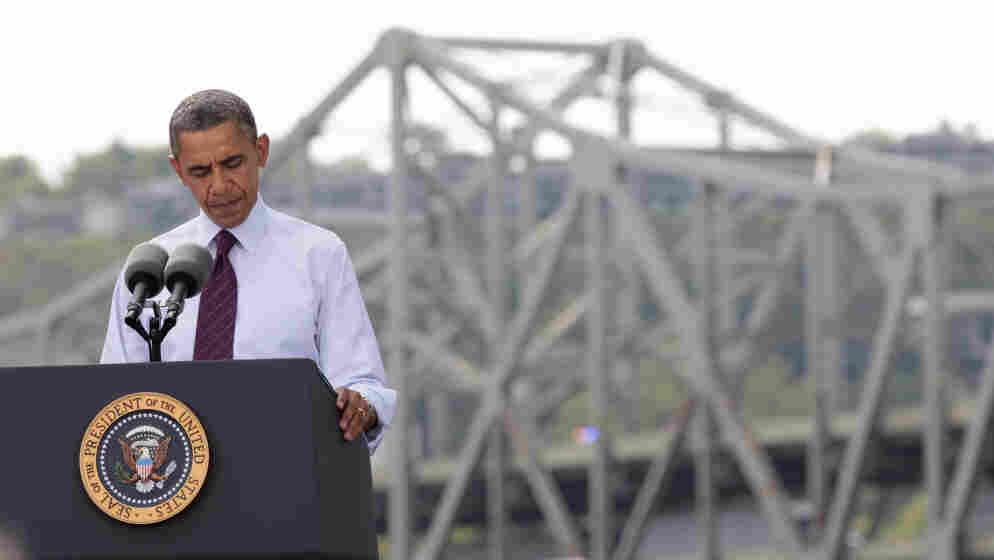 President Obama on Thursday visited the Brent Spence Bridge, which has been called "functionally obsolete." The president pressed Congress to pass his jobs act, arguing that if the country doesn't invest in restoring the bridge and other infrastructure now, it will pay for it later. Pablo Martinez Monsivais/AP hide caption

President Obama continued his tour in support of his jobs bill Thursday. The latest stop: Cincinnati, at the base of the double-decker Brent Spence Bridge.

The bridge sits on one of the busiest trucking routes in the country, and it's considered functionally obsolete.

Gerardo Claudio lives in Augusta, Ga., and works all over the U.S. He spends about three weeks on the road every month, which gives him a good look at the nation's infrastructure.

"The roads are in real, real awful condition, should I say," says Claudio, who was in Cincinnati on Thursday.

That has consequences for the type of work he does.

"The van that I drive, I mean right now going through all these potholes and this and that, it takes away from the vehicle value," he says. "It takes away in wear and tear."

The infrastructure deterioration that Claudio experiences is Fred Craig's specialty. Craig, an engineer, works on the Brent Spence Bridge Project.

Craig says the bridge was designed for 80,000 vehicles a day. Today, it carries double that number. The shoulders have been turned into traffic lanes, so when there's an accident, the cars back up for miles. Even so, roughly 4 percent of the country's gross domestic product crosses the bridge.

Who Will Pay To Fix That Bridge In Ohio?

As America Ages, A Push To Make Streets Safer

"Locally, it's very important because it connects northern Kentucky and southwestern Ohio," Craig says. "But nationally it connects the Great Lakes to the Gulf."

Obama argues that if the country doesn't invest in restoring this kind of infrastructure now, it'll pay for it later.

"Cincinnati, we are better than that; we are smarter than that," he told a crowd Thursday. "And that's why I sent Congress the American Jobs Act 10 days ago."

As the crowd cheered "Pass this bill," Obama took his Republican critics head-on.

"You know, we've got a lot of folks in Congress who love to say how they're behind America's jobs creators," he said. "Well, if that's the case, then you should be passing this bill. Because that's what this bill is all about, is helping small businesses all across America."

A short walk from the end of the bridge, Greg Cook runs a sporting-goods store. He says he thinks infrastructure jobs are a Band-Aid for the unemployment problem, and he's not interested.

"It's a short-lived fix," he says. "I mean, the guys will be working on the bridge for a couple years, and then they're out of work again."

Don't patronize us by implying that if we pass the second stimulus, that bridges will get fixed right away. The American people heard the same thing when the administration was selling the first stimulus.

The truth is, construction on the Brent Spence Bridge would not begin right away even if the bill passes tomorrow. The White House says it never claimed this project was shovel-ready. One reason it was chosen was its political symbolism.

The Brent Spence connects House Speaker John Boehner's home state of Ohio with Senate Minority Leader Mitch McConnell's Kentucky. On the Senate floor Thursday, McConnell said it would be great to fix this bridge, but the president's jobs bill won't get it done.

"Don't patronize us by implying that if we pass the second stimulus, that bridges will get fixed right away," McConnell said. "The American people heard the same thing when the administration was selling the first stimulus."

"There's 300 new families living down at The Banks, and more coming. And those people are buying products from me and other people downtown and in the region," McClorey says. "And it also benefits and helps to repopulate the city center, which I think is very important."

This Cincinnati trip is the latest in a series of jobs events Obama has held across the country. Before this he was in Raleigh, N.C.; Richmond, Va.; and Columbus, Ohio. No coincidence those are also swing states he wants to win to get re-elected in 2012.