Accessibility links
Europe's Debt Crisis Casts Cloud Over U.S. Economy U.S. Treasury Secretary Timothy Geithner's trip to Europe last week reflected American concerns over Europe's economic woes. The Americans would like to see a swift European response, but that's a tall task when so many nations must agree on a plan. 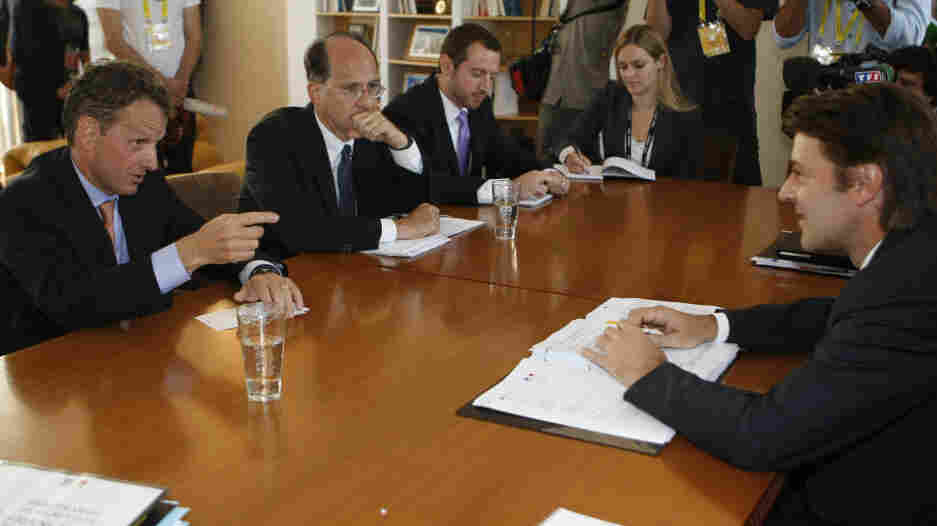 U.S Treasury Secretary Timothy Geithner (left) speaks to French Finance Minister Francois Baroin (right) during talks in Marseille earlier this month. The U.S. is increasingly concerned that the European debt crisis will have an impact on the U.S. economy. Lionel Cironneau/AP hide caption 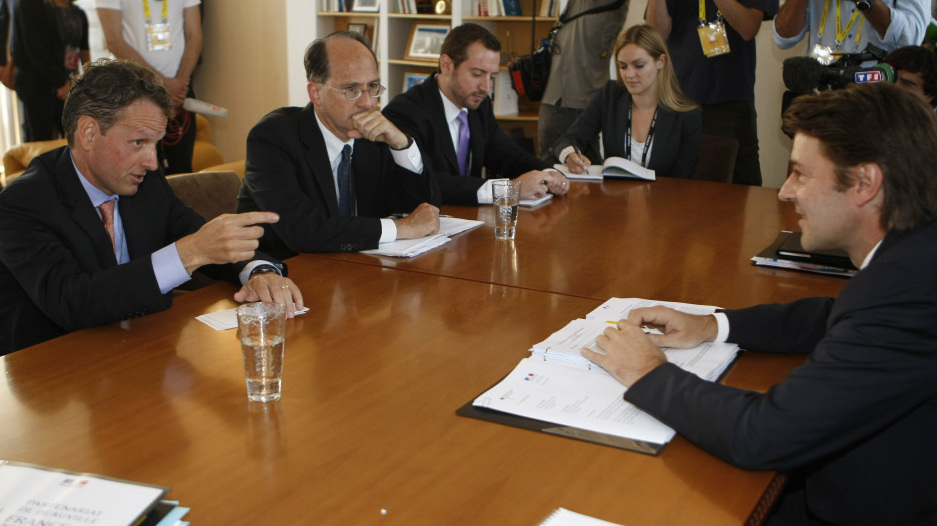 U.S Treasury Secretary Timothy Geithner (left) speaks to French Finance Minister Francois Baroin (right) during talks in Marseille earlier this month. The U.S. is increasingly concerned that the European debt crisis will have an impact on the U.S. economy.

With all the worry over the ailing U.S. economy, Europe's debt crisis may have seemed a long way off.

But not anymore. The faint tinkle of alarm bells a few months ago are now clanging loudly. What began as a crisis in smaller countries, like Greece, Portugal and Ireland, is now creating serious issues in much larger economies like Italy, France and Germany.

"It is important for Americans to understand what's going on in Europe," says Olli Rehn, the European Commissioner for Economic and Monetary Affairs, who was in Washington on Thursday. "U.S. reactions to Europe's sovereign debt crisis have typically expressed incomprehension, right or wrong."

Nigel Gault, the chief U.S. economist at IHS Global Insight, says there are several reasons why the European debt crisis should worry the U.S.

Up until now, the Europeans have been behind the curve all the way through.

"We have important trade links with Europe. So if this crisis leads to Europe going into recession, that's very bad news for U.S. export prospects," he says. "Secondly, the U.S. has got a lot of investments in Europe; it's the biggest place for U.S. direct investment abroad."

More importantly, Gault says there could be a serious spillover to the already fragile U.S. banking system. Treasury Secretary Timothy Geithner has been the most visible American official working to contain the European crisis. Last week, he had an unprecedented meeting with finance ministers of the eurozone, the countries that use the euro as a common currency.

But Geithner's advice was not well received or appreciated by some of the ministers, who complained they were being lectured to.

"I think a lot of times we in the U.S. like to share our experience, our views, and sometimes that can come across quite forcefully," says Robin Lumsdaine, a professor of international finance at American University's Kogod School of Business. "I think any time you have any kind of international discussions, there has to be some layer of diplomacy in there."

Lessons Of The U.S. Crisis

IHS's Gault says Geithner must be frustrated. The Treasury secretary learned from the economic crisis here in the U.S. three years ago that timing is everything when you're trying to contain the problem.

"He certainly is going back to the U.S. experience and saying you need to act fast on these things, you can't let events spin out of control," says Gault. "Up until now, the Europeans have been behind the curve all the way through."

Gault says Geithner wants Europe to take more decisive action to get ahead of events. But the problem is the eurozone is made of 17 nations, and building consensus for a course of action is difficult.

Analysts say the U.S. relationship with European nations is generally stable. But Washington has focused on other regions in recent years, including China, the Middle East and emerging nations, and has not spent as much time with its European friends.

"The more confident one is in the strength of a relationship, the less time one feels one needs to spend to coddle that relationship," she says. "And I think that's perhaps the situation with Europe. They've been our solid partners in many respects for so long, and so I think it's more that we're quite confident in that relationship, even as there may be tensions."

Lumsdaine says a situation where the U.S. is pulling all the strings isn't a long-term solution. She says it just weakens the credibility and sovereignty of the other countries. For now, all the U.S. can do is advise, and much of that will be done in private.