Accessibility links
In A Strong Return, 'The Office' Finds Its Footing Without Steve Carell The Office has officially started its first season without Steve Carell. A new boss, a new star, and some old-fashioned physical comedy contributed to a strong Thursday night return.

In A Strong Return, 'The Office' Finds Its Footing Without Steve Carell

In A Strong Return, 'The Office' Finds Its Footing Without Steve Carell 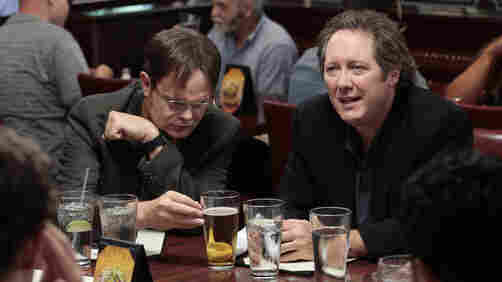 Rainn Wilson and James Spader in "The List," the season premiere episode of NBC's The Office. Chris Haston/NBC hide caption

The producers of The Office were careful about keeping last night's season premiere under wraps. Critics didn't see it, and while some details had come out, they successfully maintained the suspense over the biggest question fans were likely to have with Steve Carell and Michael Scott gone: What now?

Back when Carell announced he was leaving, there was a lot of back-and-forth about whether the show would go with an internal candidate, promoting an existing character to Michael's job, or whether they'd bring in an outside name. There were arguments for both: Bringing in a new face, if they found the right one, would be a shot in the arm at a time when they might need it. But picking an internal candidate presented the opportunity to build on the characters the writers have known for years and also might soothe the sense that a new and unfamiliar character was supposed to instantly fill Michael's shoes.

Wisely, the show managed to have it both ways. James Spader came in to play Robert California, a blunt, off-putting oddball who's the new CEO — the job Kathy Bates' character used to have. And in the end, Ed Helms' Andy Bernard beat out Dwight and Darryl for the job of Regional Manager, Dunder Mifflin Scranton.

At first, the writing of Andy as boss, particularly as he dealt with the intimidating Robert, seemed tentative and a little too reminiscent of the way Michael was written: ingratiating, terrified, clumsy, and trying to do right by the staff in a way that just made everyone more anxious. When he leaned over to a very pregnant Pam (the show jumped ahead quite a bit) and said "Chins up," then held awkwardly for the laugh that didn't come, it seemed like something straight out of the book of Michael Scott insults, and not like Andy's substantially gentler nature.

But by the end, Andy discovered that indeed, he is not Michael — or at worst, he is already the substantially evolved Michael from later seasons, and is not the craven Michael who would, early on, have caved to a guy like California out of rank status insecurity.

After the staff discovered that California had divided them into "winners" and "losers," the button on the story first seemed to have gone to Spader, in a speech about how even the "losers" shouldn't worry, because he was only giving first impressions and would be fine with being proved wrong. It seemed like the story had concluded as one about California — who he was and wasn't, and whether he was truly a bad guy or not.

But then Andy took a deep breath and went in to defend the "losers," making smart and true — but also very funny — defenses of the merits of employees like Stanley, Meredith, and Pam. The entire office overheard him, and in a lovely and understated sequence, at the end of the day, the people Andy manages all smiled and said good night with evident gratitude, and the fist-bump he got from Darryl will, you just know, keep him going for quite a while.

At the same time, the story about Pam's high emotions during pregnancy, which could have played out as nothing but pathetic, paid off at the end, too. Already feeling hormonal, out of sorts and worried about transitioning fully into middle age as a mom of two kids, Pam was devastated to be branded a "loser." In the final moments, she got a note from Jim that was the first thing the show has written in a couple of seasons that had as much charm and simple affection to it as the things that were written for Jim and Pam back when they were just friends. What made them compelling from the start was their ability to support each other in exactly the right way, and Jim's note demonstrated that he still knows his wife, not only as her husband, but also as her very best friend. (This was also the first episode in a while where Jim seemed entirely like himself; for a season or two, he's seemed unpleasantly off, kind of smug and angry.)

On top of a couple of storylines that paid off nicely, the episode was also satisfyingly and consistently funny. A running gag about "planking" could have been really dumb, but it took the show back to the physical comedy it has actually always done quite well (remember the frenetic fire sequence at the beginning of the post-Super-Bowl episode), right down to Dwight blowing Meredith off the top of the restroom partition with a fire extinguisher, which may have been one of their most audacious physical gags ever.

What was particularly important about the episode was that it didn't feel overwritten or panicky. It didn't feel like they were trying to cover up the loss of Carell with gimmicks. It felt, in short, like a strong episode of The Office. It was both warmly funny and wickedly funny, and it retained the sense of flawed humanity that always distinguished Carell's best work, even without him there.

The curse of recent seasons of The Office has been unevenness, so until they've made it through a few episodes, it's tough to give a diagnosis of the post-Carell show. But that was about as good a first outing as they could have hoped to have.