Accessibility links
Mexican Drug Cartels Now Menace Social Media The Mexican drug cartels have waged a ferocious campaign against the media, killing journalists who have reported their activities. Now it appears they are going after social media sites. 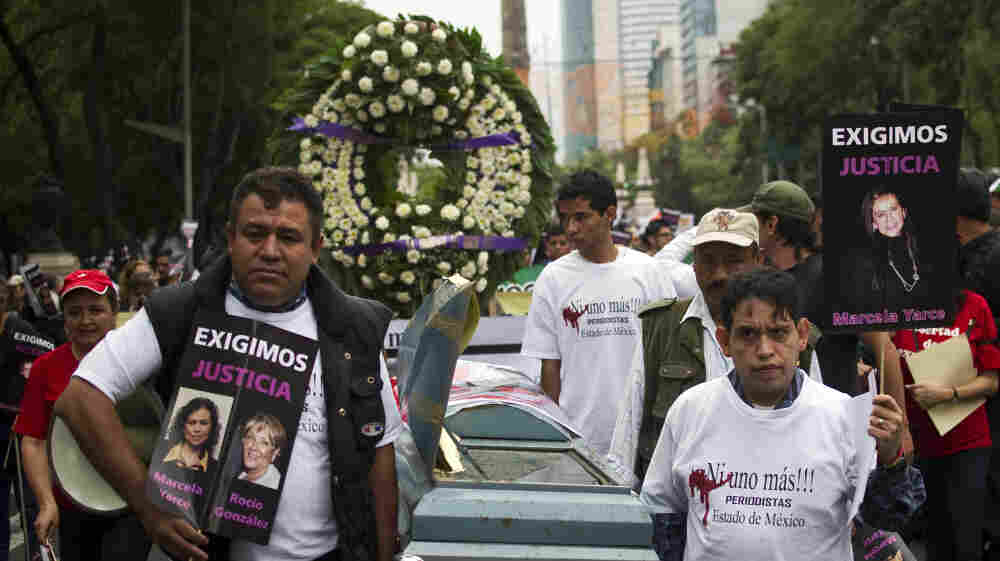 Mexican journalists march in a protest against violence directed against the media on Sept. 11, in Mexico City. Drug cartels, which have been responsible for many of the deaths, are now intimidating social media sites. Ronaldo Schemidt/AFP/Getty Images hide caption

In areas where they are powerful, the Mexican drug cartels silenced the mainstream media by threatening and killing journalists. Now they seem to be extending the practice to social media.

Many Mexicans have had to rely on social media to find out what's going on in their cities after newspapers, TV and radio stations stopped reporting on drug-related violence.

But last week, the mangled bodies of a young man and woman were hung from a highway bridge in Nuevo Laredo along with a sign that read: "This is what happens to people who post funny things on the Internet. Pay attention."

"It suggests that the blogosphere has been included in the media landscape that the cartels are looking at. Because up until now it has only been traditional media — print, TV and radio," says Javier Garza, the editor of El Siglo de Torreon, a newspaper in the neighboring Coahuila state, which is also aflame with cartel violence.

It suggests that the blogosphere has been included in the media landscape that the cartels are looking at. Because up until now it has only been traditional media — print, TV and radio.

The message seems to indicate that a drug cartel is upset that its activities are being posted on websites — two in particular.

Frontera Al Rojo Vivo — loosely translated as The Raw Border — is a blog run by the Monterrey newspaper El Norte for use by border residents to exchange information.

The other is Blog del Narco, a notorious website run by an anonymous webmaster and open to anyone. Blog del Narco accepts posts from ordinary citizens, police agencies and, increasingly, the narcos themselves. The site features grisly photos and videos of cartel mayhem around the country.

The narcos want it both ways. They want to censor the negative things that people say about them on this and other blogs. And yet they want a forum to post their own propaganda, or have sympathizers do it on their behalf.

"In Blog del Narco [they] are amplifying the public relations efforts the cartels had already started," says Rosental Alves, a journalism professor at the University of Texas, Austin, who follows new media in Latin America.

In the routine barbarity that defines the Mexican mafia wars, they use images of murder, torture and even beheadings to intimidate foes and brag of their exploits.

Blog del Narco, like the popular Mexican tabloids, has learned that savagery sells. You can log on, and see photos of severed heads and disfigured bodies next to ads for GM Truck Month, Geico Auto Insurance, Volvo, AT&T and Lysol Toilet Bowl Cleaner.

On another level, Blog del Narco and copycat websites have become required watching for intelligence gatherers who want to know what the cartels are up to.

This is not to say that all social media in Mexico have been co-opted by drug traffickers.

Some networks do provide timely information for nervous citizens. Twitter followers of #nuevolaredo will ask: Does anybody know what the boom heard downtown was — a harmless firecracker or a hand grenade?

But, increasingly, experience tells Mexicans to be cautious about the information they get on social networks.

"We've seen infiltration by criminal groups who use social media to spread rumors that can create mass psychosis," says a veteran journalist in Matamoros, who asked not to be named. "Far from calming people, it just makes them more panicked."

There have been instances, for example, in which cartel members tweeted about a shootout in a certain neighborhood for the purpose of diverting the police and military to that area. Then the cartel unleashed an operation in another part of the city.

And some of the misinformation comes from well-meaning citizens.

Veracruz is a port city on the Gulf of Mexico that's being contested by warring mafias. Weeks of running gun battles have put the city on edge.

This week, gunmen in two trucks dumped 35 bodies of suspected rival gang members onto a busy avenue. Horrified motorists frantically tweeted for others to avoid the area.

But a month ago, two residents independently tweeted that narcos were kidnapping children from schools. Bedlam broke out. Parents raced through the streets to the schools to rescue their children. Police logged 26 vehicle accidents.

It was a false alarm.

"If you tweet false information about violent episodes, I think first we have to discern your intent — is it malicious intent or did you just retweet information you saw elsewhere?" says Garza, the newspaper editor.

Initially, angry state prosecutors arrested the two Veracruz residents who tweeted and charged them with terrorism and sabotage. But human-rights and Internet-freedom activists screamed foul.

This Wednesday, authorities dropped the charges against the two and they walked out of jail to jubilant supporters. The Veracruz state legislature is now expected to create a new offense for bloggers who "disturb the peace."