Accessibility links
Primatologist Jane Goodall Plays Not My Job When she was in her 20s, Jane Goodall left her home in England to live among chimpanzees in the jungle. Some people thought it was crazy; we think it's crazy she decided to come back to live with humans. We've invited Goodall to answer three questions about Nicolas Cage. 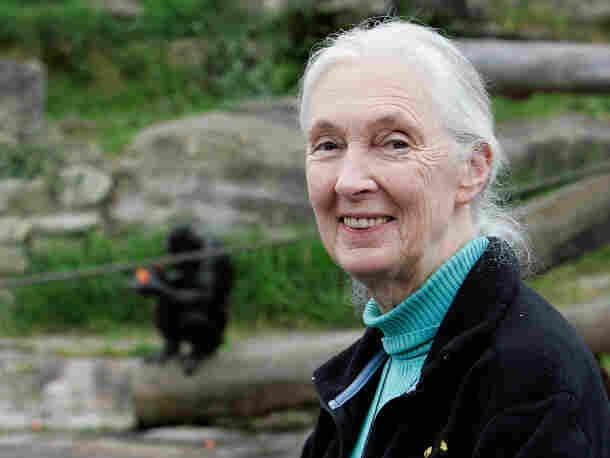 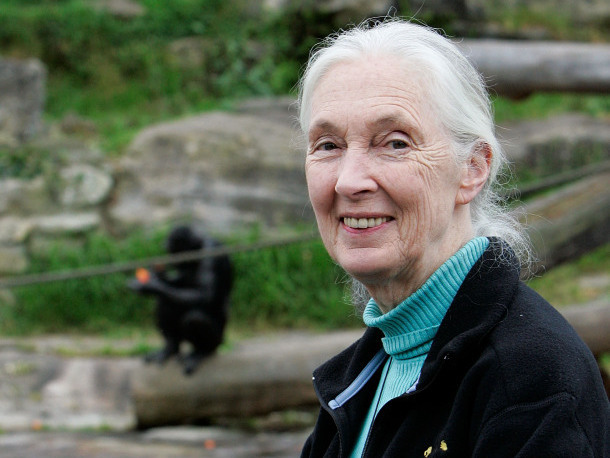 When she was in her 20s, Jane Goodall left her home in England to live among chimpanzees in the jungle. Some people thought it was crazy; we think it's crazy she decided to come back to live with humans.

PETER SAGAL, host: And now, the game where we invite on giants of their fields to answer tiny little questions. In her 20s, our guest today left her native England to live among chimpanzees in the African jungle. Some thought it was crazy. We think it's crazy she ever came back to live with us humans.

Her presentation: Jane Goodall Live will be broadcast in move theaters all around the country on September 27th, but she joins us now. Jane Goodall, welcome to WAIT WAIT...DON'T TELL ME!

SAGAL: So, we're very honored to have you with us. We know that these days, instead of living with the chimpanzees, you travel around the world speaking to audiences about chimpanzees and the need to preserve them. And we understand that you often greet audiences in chimpanzee language.

SAGAL: Can you do that for us now?

SAGAL: But can you tell me what that means in chimpanzee?

GOODALL: Well it means hello. It's called pantoot (ph), the distance greeting. You would hear it if you came with me to Gambia and climbed up the mountains and listened in the morning. And if you're lucky, you'll hear a chimpanzee greeting the day and basically saying, "This is me. Who's out there? Who are you? And hello."

SAGAL: When you do it, I'm assuming you've done it with the chimpanzees; do they look at you funny? Like, who is that very strange looking chimpanzee?

GOODALL: I don't do it in the wild because we don't interact with them that way. But I sometimes do it, you know, with a captive group. And of course, in each group, they have their own particular dialect. And I think when I greet a captive group this way, they're not quite sure what to make of it and who's talking and who is she.

SAGAL: Right. So one of the things that I did not know, I mean I knew that you were a world renowned primatologist, but I did not know that you began so early. You went to Africa to be with the chimpanzees at a very young age.

GOODALL: Well, I saved up and got to Africa. I mean I had to save up, we didn't have any money. And I got there when I was 23, with no degree or anything, and was fortunate enough to meet Louis Leakey, the famous anthropologist. And he offered me this opportunity to study chimpanzees. And I began in the field when I was 26.

SAGAL: How did you conceive that desire to go? I know a fair number of young women, but very few of them say that their real dream is to go to Africa and live with the chimpanzees.

GOODALL: Well, it started when I was a tiny child and, you know, then I found the books about Dr. Doolittle who could speak animal language. And then, when I was 11, I read the book about Tarzan, Lord of the Apes, Tarzan of the jungle. And of course, I fell passionately in love with this glorious being. And what did he do? He married that other stupid wimpy Jane.

SAGAL: You were jealous.

GOODALL: I was very jealous.

SAGAL: Now, you've observed so much about chimpanzees and you've advanced our understanding so much. We were wondering if you or the chimpanzees through you have anything to teach us. For example, as you know, or maybe you don't know because you travel so much, here in America the political situation has reached a complete impasse. So the question is how do chimpanzees resolve disputes between groups, if they have a way?

GOODALL: And if they see one or two individuals from a neighboring social group, they are liable to attack them very seriously. So like us, they have a dark side to their nature.

SAGAL: Really? Do they ever accuse each other of being socialists?

JESSI KLEIN: Do they ever send naked pictures of themselves to their constituents on twitter? That's an inside

GOODALL: That would be an interesting development.

GOODALL: They are nicely covered with hair.

SAGAL: That's true. Really funny, like a chimpanzee sexts you, like I can't tell, it's just brown. What is that?

KLEIN: I got another brown sext.

SAGAL: Exactly. So, I mean, within bands of chimpanzees, do they have ways of like getting along?

GOODALL: Yes. Actually, what's very impressive with chimpanzees, you know a community is about 50 individuals, and they all know each other and they get along. They may have squabbles but they're not very terrible.

And if there is a squabble, if there is a conflict, what's very fascinating to watch is that this creates tension in the group, and that tension is not really resolved until the victim of the conflict approaches the aggressor, submissively.

The aggressor will reach out and pat, embrace or kiss. The victim then becomes calm and social harmony is restored. And it reminds me of my grandmother. You know, when I was growing up, she would always say before you go to sleep, you must say sorry, if there's been some kind of quarrel.

GOODALL: Let not the sun set on your anger.

BABYLON: Jane, I'm curious. I made the mistake and got caught up in a Hollywood movie called "Planet of the Apes." And it's like terrifying. Could that ever happen?

GOODALL: Well, so you're thinking about putting scientists into small cages and doing research on them. I wish it could happen sometimes.

SAGAL: Oh, I see. Turn the tables on them.

SAGAL: We understand that - one of my favorite stories that came across about you was about a Gary Larson cartoon some years ago.

GOODALL: Oh yes, that was a lovely one.

SAGAL: Can you describe it?

GOODALL: Yes. It's two chimpanzees and the female is grooming the male, and he's got his back to her. And she's holding up a hair and she's saying, ah, another blonde hair. Doing some more research, in quotes, with that Jane Goodall tramp?

SAGAL: We were told that your foundation saw it and was very angry with Mr. Larson, but you were not.

GOODALL: Well, I mean this stupid woman who was the executive director at the time wrote and said this implied that Jane Goodall has sexual relationships with the chimpanzees. I mean honestly.

GOODALL: No, I thought it was very funny. And I think if you make a Gary Larson cartoon, boy you've made it.

SAGAL: Well Jane Goodall, we are delighted and, in fact, honored to talk with you today. But we have also asked you here to play a game that this time we're calling?

SAGAL: You study the lives and culture of the wild chimpanzee, but we thought we'd ask you about a creature that's truly wild. We're going to ask you three questions about the doings of actor Nicolas Cage.

SAGAL: If you get two right you'll win our prize for one of our listeners, Carl's voice on their voicemail. Carl, who is renowned biologist Jane Goodall playing for?

SAGAL: All right, you ready to try this?

SAGAL: Here we go. Mr. Cage, Nicolas Cage says that once his own home was invaded by whom? A: the San Marino California Con Air Fan Club?

SAGAL: B: a very drunk Cher. Or C: an otherwise naked man, wearing a leather jacket and eating a fudgsicle?

GOODALL: Well, I'm going to take the second one, whatever it was you said, number two.

SAGAL: I said the actress and singer Cher.

SAGAL: Cher broke in? No, actually, although that I guess could happen, depending on the kind of day Cher had had.

SAGAL: It was actually C, the mostly naked fudgsicle man.

GOODALL: Well, I just didn't like thinking about that.

SAGAL: No, neither did I. And neither did Mr. Cage. In fact, he disliked the experience so much that after he talked the man out of the house, he then moved, he says.

All right, you have two more chances. There was speculation in the news just this week that actor Nicolas Cage is secretly what? A: an undead vampire? B: a woman? Or C: a really good actor?

GOODALL: Well, I'm going to pump a really good actor because I'm getting a bit sorry for this Nicolas Cage.

BABYLON: We all are.

SAGAL: I'm going to say, personally, I think Nicolas Cage really is a good actor, so I don't think speculation that he would be a good actor would be in the news, personally.

GOODALL: No I'm sticking with it.

SAGAL: You're sticking with it.

SAGAL: I have a feeling that I could not talk you out of this even if I tried, so I'll say no, I'm afraid it was undead vampire was the speculation.

GOODALL: Okay, all right, I knew it was going to be wrong, but I just thought I'd give him a plug.

SAGAL: I appreciate that.

SAGAL: He appreciates that.

SAGAL: What happened was is a Civil War era photo came to light showing a solder from the Civil War who looks an awful lot like Nicolas Cage. And the guy who was trying to sell the picture on eBay insists that the only explanation for this is that Cage is an undead vampire who never ages.

BABYLON: That is hilarious.

SAGAL: All right, you have one more question. Let's see if you can get this one. Cage got in some financial trouble recently, mainly because he spent a lot of money rather than sending it to the IRS as he was supposed to. Among his extravagant purchases was what? A: a dirigible. B: a sold platinum golf putter. Or C: a tyrannosaurus skull?

GOODALL: Oh, well, if I was Nicolas Cage, I'd definitely want the tyrannosaurus skull.

SAGAL: You and he are of a like mind, because that was the answer, yes.

SAGAL: Cage paid almost three hundred thousand dollars for the skull. He beat out actor Leonardo DiCaprio at the auction. Cage also bought a castle in Germany, an estate in Newport, Rhode Island and an entire island in the Bahamas.

GOODALL: So maybe after I've, you know, pumped for him as a really good actor, he'll make a donation to the Jane Goodall.

Carl, how did Jane Goodall do on our show?

KASELL: Well, she had one correct answer, Peter, but she needed two to win for Candy Thompson.

SAGAL: Jane Goodall is appearing in movie theaters across the country in "Jane Goodall Live" on September 27th. We encourage you to find out about that and go. Jane Goodall, a pleasure to talk to you. Thank you for your work and thank you so much for being here on WAIT WAIT...DON'T TELL ME!