Accessibility links
Defense Leaders Make The Case Against Cuts Military leaders are promoting their branch's respective strengths in hopes of softening the super committee's blow, while private industry executives have warned against losing the country's industrial base. 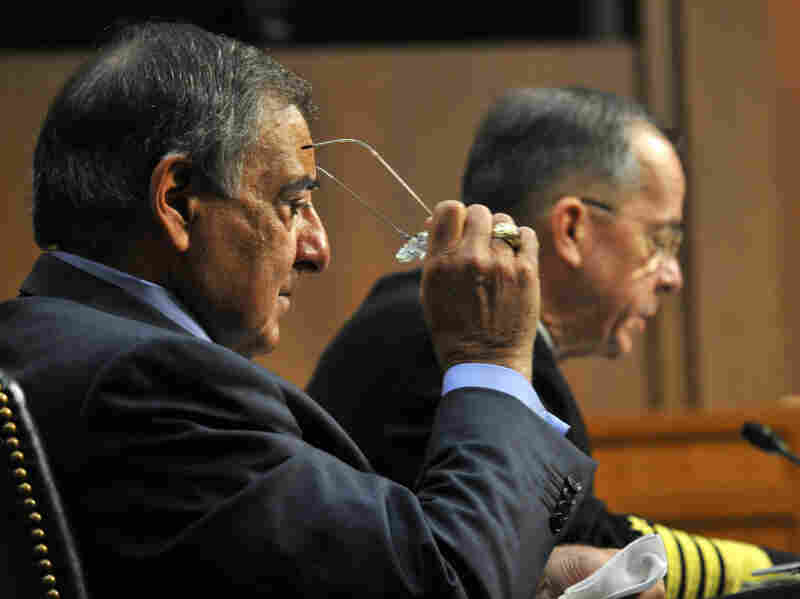 Chairman of the Joint Chiefs of Staff Adm. Mike Mullen (right) and Defense Secretary Leon Panetta testify before the Senate Armed Services Committee on Thursday. The Pentagon is tasked with cutting $450 billion from its budget in the next 10 years. Karen Bleier/AFP/Getty Images hide caption 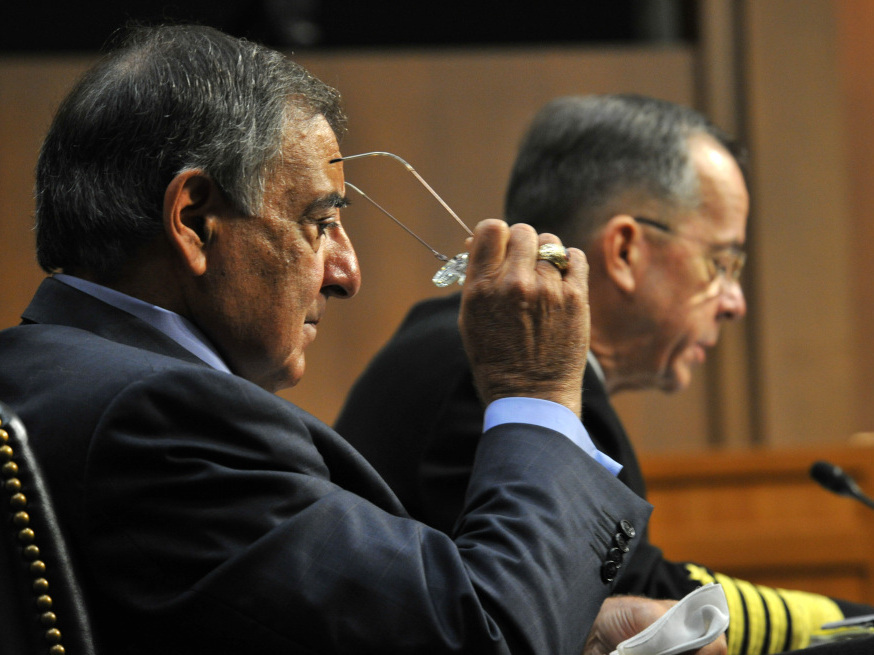 Chairman of the Joint Chiefs of Staff Adm. Mike Mullen (right) and Defense Secretary Leon Panetta testify before the Senate Armed Services Committee on Thursday. The Pentagon is tasked with cutting $450 billion from its budget in the next 10 years.

The congressional supercommittee has two months to come up with a way to slash more than a trillion dollars from the federal deficit or risk deeper cuts that would be triggered automatically. Everything is on the table in the debate — including defense spending.

The Pentagon is on a mission to prevent the defense budget from taking the brunt of the cuts, and the threat of losing funding has both the military branches and the defense industry fighting back.

"It's safe to say that every single line of the budget is under scrutiny," Secretary of the Air Force Michael Donley said at the Air Force Association's annual conference this week.

Discussion at the conference this year centered on how to survive the pending budget cuts. The Pentagon has already been ordered to cut at least $450 billion from its budget over the next 10 years, and that number could grow to more than a trillion dollars depending on what Congress does.

The heads of each branch of the military are making their case and explaining why their service is special.

"We will continue to play a vital role in national security because of our reach, our vigilant situational awareness, our power," Donley said.

The word "reach" makes reference to the Air Force's ability to fly anywhere in the world, and fast. It uses the term to distinguish itself from the other branches of the military.

"The name of the game right now is differentiation," says Todd Harrison, a senior fellow with the Center for Strategic and Budgetary Assessments in Washington.

In a recent letter to Secretary of Defense Leon Panetta, Marine Corps Commandant Gen. James Amos made his case for what sets the Marines apart. Amos wrote that the Marine Corps fills a unique role in America's armed forces and is not just "a second land army."

You're going to see both the Air Force and the Navy trying to define how they are relevant and how their capabilities are increasingly important in the future.

Todd Harrison, a senior fellow with the Center for Strategic and Budgetary Assessments

Another front in this defense budget battle is the defense industry, which is fighting for its future by conjuring up images of the past.

The PR campaign that the industry launched last week in Washington included video of the historic moon landing. Chief executive officers from some of the biggest defense companies were there to lobby against the cuts.

David Hess, president of Pratt & Whitney — a company that makes engines for military aircraft — said in a press conference with other industry leaders that deeper cuts now could cost America the ability to build the aircraft, warships and weapons of the future.

The last line of attack in this budget battle is coming from the Pentagon's chief, Secretary of Defense Leon Panetta, who went to Capitol Hill this week warning against across-the-board cuts.

Republican Sen. Lindsey Graham of South Carolina set the stage by asking Panetta what would happen if automatic triggers went into effect.

"If this supercommittee can't find the $1.4 trillion they're charged with finding in terms of savings over the next decade, there will be a trigger pulled to achieve that savings, and $600 billion will come out of the Defense Department ... on top of what you're trying to do," he said to Panetta. "If we pull that trigger, will we be shooting ourselves in the foot?"

"We'd be shooting ourselves in the head," Panetta replied.

Panetta says that defense cuts above the original $450 billion are unacceptable, and that if the supercommittee needs to find more cuts, it should look outside defense, at programs like Medicare, Medicaid and Social Security.

But unilateral cuts to those programs are, of course, where the White House draws its own line.