Accessibility links
For Hockey Player, Prison Saves Two Lives Mike Danton served five and a half years in prison after he was convicted in a murder-for-hire scheme. After getting out, he joined a professional hockey team in Sweden. When a player collapsed during a recent game, Danton helped save his teammate's life using first-aid skills he learned in prison. 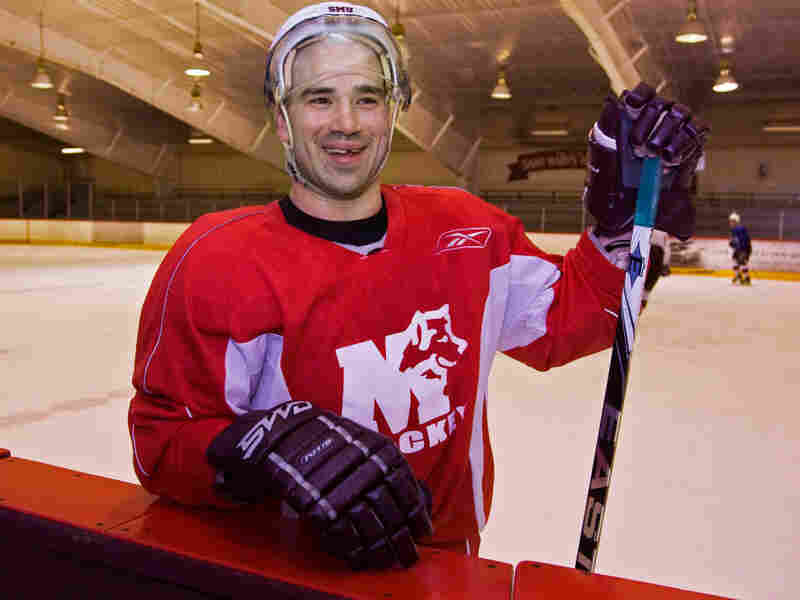 Mike Danton helped save the life of a teammate last week using skills he learned while serving a prison term for plotting to kill someone. Andrew Vaughan/AP hide caption 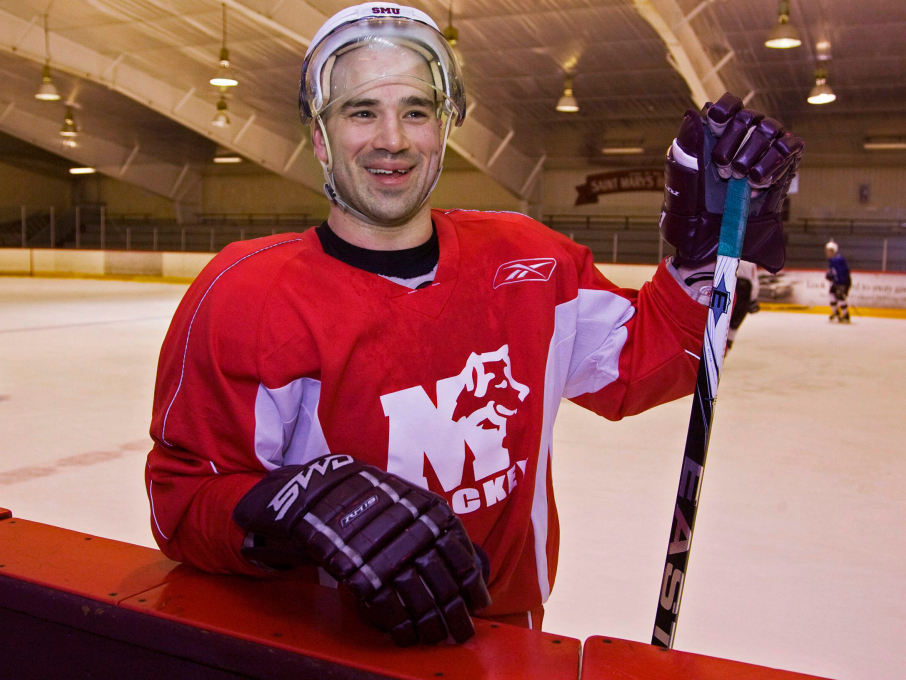 Mike Danton helped save the life of a teammate last week using skills he learned while serving a prison term for plotting to kill someone.

There are dramatic lives — and then there's the life of Mike Danton. Sports fans remember Danton as a former National Hockey League tough guy, whose budding career came to a stunning end in 2004 when he pleaded guilty to trying to hire someone to carry out a murder.

This week, Danton was back in the news and the subject again was life and death. But this time, Danton, who's out of prison and back on the ice, was on the right side of the story.

From Clean Hit To 'Something Pretty Scary'

By hockey standards, the hit was clean. But the end result wasn't.

Marcus Bengtsson, a 21-year-old forward for the Swedish professional hockey team IFK-Ore, took the hit from an opponent during a game last week against Soderhamn-Ljusne. The hit sent Bengtsson into the ice head first.

Danton, who signed with IFK-Ore in late July — his first pro contract since he left the NHL in 2004 — skated over to his fallen teammate.

"I heard him start groaning," Danton says. "I looked down and I was like 'You OK?' and he just went into convulsions and started shaking."

Danton flung away his gloves, stick and helmet and knelt down beside Bengtsson. Bengtsson's condition got worse.

"His eyes started rolling back and his face went from normal color to beet red and then to pale white," says Danton. "Then all of a sudden he started convulsing even more and bubbles of blood were coming out of his mouth. It went from being what I thought was a clean hit, to something that was pretty scary."

Danton estimates Bengtsson's convulsions continued for six to eight minutes. It seemed like an eternity. At one point, Bengtsson relaxed his clenched jaw enough for Danton to wedge his fingers inside Bengtsson's mouth. Danton later was told he shouldn't have done that — and he has the bite marks to confirm it.

But, as he said later, "you could very easily tell that he couldn't breathe, the way he was pushing air out through his clenched teeth ... and the color of his face. Something had to be done, and I made a decision and I put my fingers in there."

Danton says he asked him if he was OK, and Bengtsson said "yep." Danton asked him, "Do you know where you are?" Again, Bengtsson answered in the affirmative.

As a last test, Danton cracked a joke.

"I almost lost one of my friends," Danton thought to himself.

A Prison Lesson: Learning To Help

Danton says the hockey-loving locals from Furudal, Sweden — home to IFK-Ore — are grateful for what he did. Obviously, so too is Bengtsson, who is alive and recovering from what's described as a mild concussion. Danton says the five and a half years he spent in prison helped him learn how to help people.

While incarcerated — first in the U.S. and then in his native Canada — Danton became certified in first aid. He learned from prison nurses, who explained how to treat the drug-addicted inmates Danton often would see having seizures.

And, Danton says, he learned how to be cool under fire. "I've dealt with so much turmoil," he says, "that in situations of adversity and stress I just deal with it very well."

By the time Danton had made it to the NHL — as a hard-nosed, brawling player — he'd already dealt with a lifetime of turmoil. He says his biological father physically and sexually abused him as a child. (The father denies it.) In search of caring adults, Danton fell in with a youth coach in Canada who, by some accounts, developed a Svengali-like control over Danton.

According to the FBI, the coach was the target of Danton's murder-for-hire scheme. In an ESPN documentary about Danton called Stranger Than Fiction, Danton says he hatched the plot in 2004 because he was convinced someone wanted to kill him.

"You mix in pain medications, stimulants, uppers, downers, sleeping pills, stuff like that with someone that has a ridiculous amount of paranoia and other psychological things going on in their head, and it's a recipe for disaster," Danton says. "I guess the demons just caught up with me."

The case took another strange twist in recent years when Danton revealed his intended victim wasn't his coach but rather his estranged father. Danton declines to give any more detail, and the plot never was carried out.

Danton served his time. He says it was five and a half years of his life gone. But at the same time, he says, those years were some of his most important because they laid the foundation for who he is today.

Danton took college correspondence courses in prison. After his release in 2009, he enrolled at St. Mary's University in Halifax, Nova Scotia. While there, his grade point average hovered around 3.9. And even though he resumed his professional hockey career, Danton continues taking a full course load online. He's pursuing a double major in psychology and criminology.