Accessibility links
'Biblical Womanhood': A Year Of Living By The Book As a woman and an evangelical Christian, Rachel Held Evans wanted to know just what being a "biblical woman" meant. She spent a year documenting her quest, which included submitting to her husband's choice in movies and holding a sign praising him at the entrance to her town in Tennessee. 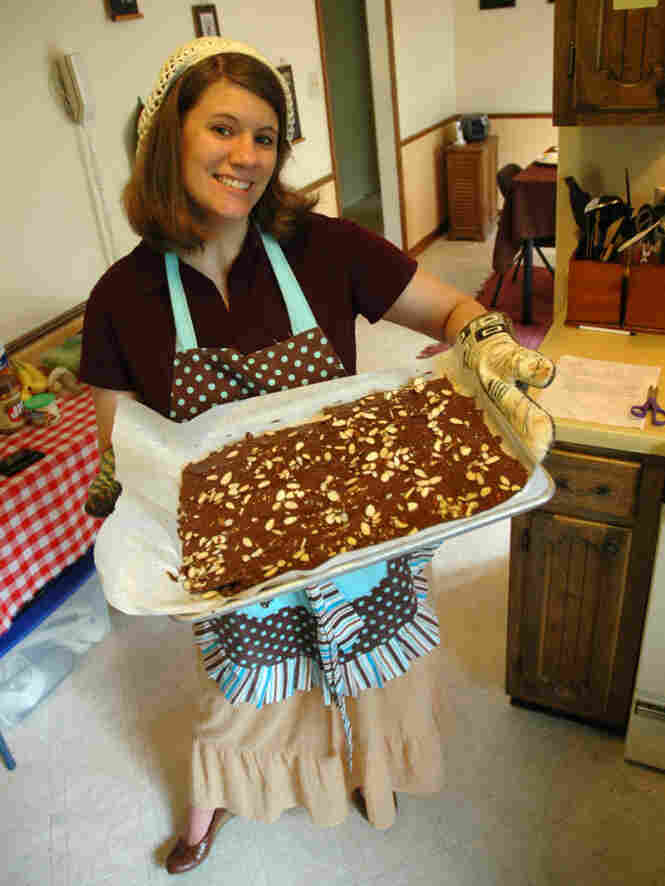 In deference to Titus 2:3-5 and 1 Timothy 5:14, Rachel Held Evans tried to stay "busy in the home," honing her cooking, cleaning and hospitality skills. She is seen here with homemade matzah toffee for Passover. Dan Evans hide caption 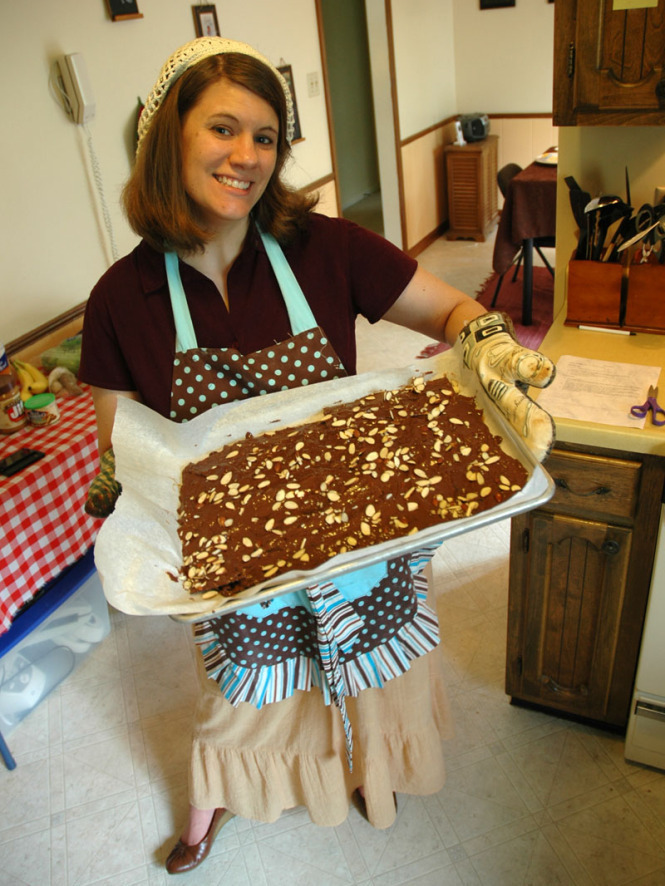 In deference to Titus 2:3-5 and 1 Timothy 5:14, Rachel Held Evans tried to stay "busy in the home," honing her cooking, cleaning and hospitality skills. She is seen here with homemade matzah toffee for Passover.

As an evangelical Christian, Rachel Held Evans often heard about the importance of practicing "biblical womanhood," but she didn't quite know what that meant. Everyone she asked seemed to have a different definition.

Evans decided to embark on a quest to figure out how to be a woman by the Bible's standards. For one year, she has followed every rule in the Old and New Testaments. Her project will end next Saturday.

Throughout the year, she kept a blog about the experience; it's going to be made into a book that will be published in 2012.

One of Evans' tasks was to submit to her husband, Dan. The need for women to submit to their husbands is repeated multiple times in the letters of Paul and Peter, she tells Guy Raz, host of weekends on All Things Considered.

"That was a challenge because my husband and I have a very egalitarian relationship," Evans says, "so it was kind of weird trying to impose a hierarchy onto that relationship."

Evans made a flow chart that had an arrow pointing from God to her husband and down to her; she posted it on their refrigerator.

"We tried to stick by that, and it would be little things like if I wanted to watch one movie from Netflix, but he wanted another one, we would defer to his," she says. 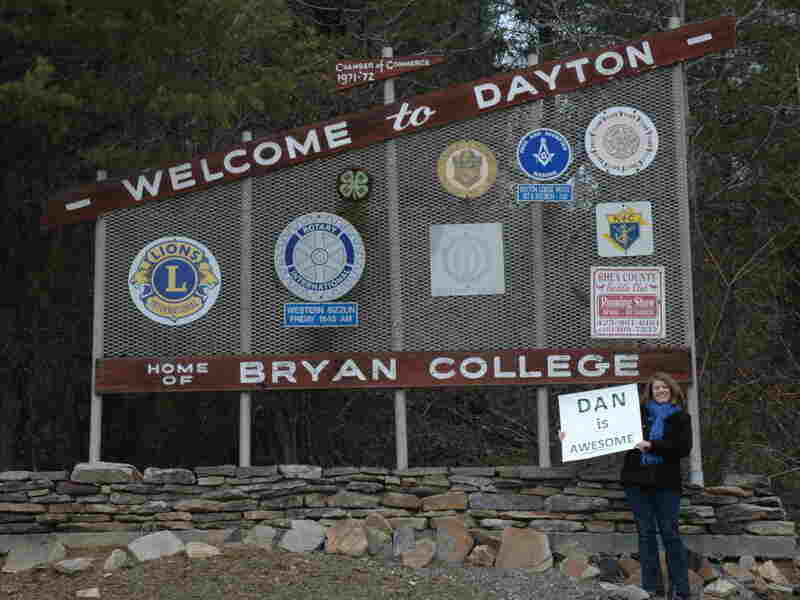 Proverbs 31:23 says that a virtuous woman's husband is "respected at the city gate," so Evans made a poster that said "Dan is Awesome" and stood in front of the "Welcome to Dayton" sign for 30 minutes one afternoon. Dan Evans hide caption 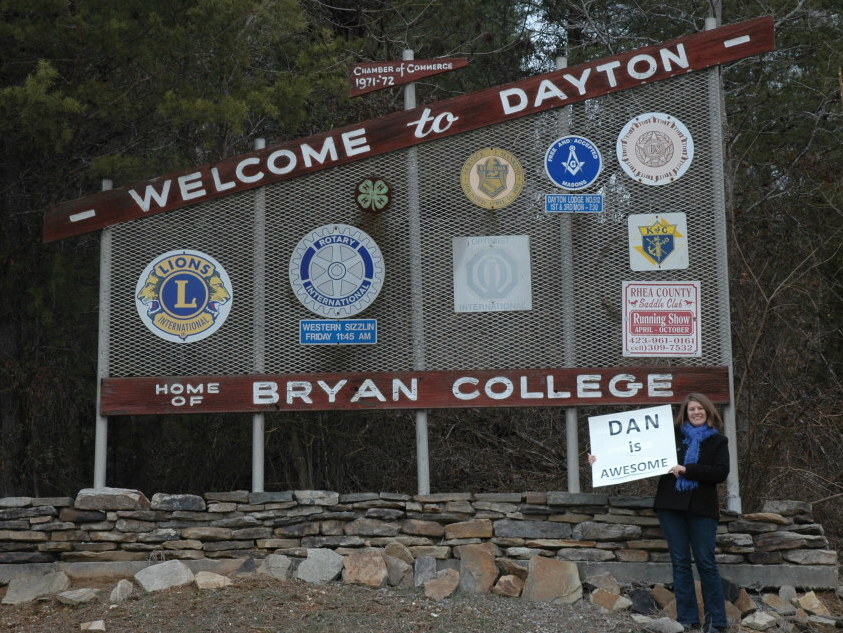 Proverbs 31:23 says that a virtuous woman's husband is "respected at the city gate," so Evans made a poster that said "Dan is Awesome" and stood in front of the "Welcome to Dayton" sign for 30 minutes one afternoon.

In Proverbs 31, a husband is praised at the city gates. Evans attempted to do the equivalent by standing outside the "Welcome to Dayton" sign in Tennessee with a poster board that read, "Dan is Awesome."

"People thought I'd lost a bet," she says.

Evans says she'd hated Proverbs 31 for years "because in the evangelical culture, it's lifted up as sort of like the model for all women everywhere, and it talks about a woman who sews from morning till night and provides food for her family and clothing."

Her perspective shifted, however, after talking to a friend about the Jewish culture's interpretation of the passage. Her friend said men were the ones who memorized the passage as a way of praising women — her friend's husband sings it to his wife at every Sabbath meal.

"That whole passage got turned around for me when I started looking at it from a more Jewish perspective and seeing it less as something that God expects all women to do and more as a way of praising what women have already accomplished," she says.

Also as part of her project, Evans spent all year growing out her hair.

"Basically, Paul says that it is a woman's glory to have long hair, which basically, I'm guessing, he wouldn't have said that if he'd met me because my hair just doesn't really look good long. It's really frizzy and poufy, and right now it is just absolutely out of control," she says. "The first thing I'm going to do on Oct. 1 when the project is over is schedule a hair appointment."

With the project drawing to a close, Evans hasn't uncovered a singular way to practice biblical womanhood.

"We're all selective in how we interpret and apply the Bible to our lives — even evangelical Christians, whether they like to admit it or not," she says. "So what I have found is that any time you think you have found a sort of blueprint or standard for biblical womanhood, a woman in scripture comes along and is praised for breaking it."