Accessibility links
New Boom Reshapes Oil World, Rocks North Dakota Breakthrough technology is allowing previously untapped oil to be drilled in the U.S., Canada and South America. And experts say that's moving the global energy supply's center of gravity away from the Middle East and toward the Americas. In a decade, they say, that could make the U.S. a bigger oil producer than Saudi Arabia. Small towns like Williston, N.D., are reaping the benefits — and bearing the burdens — of the boom.

The North Dakota oil boom has produced a housing shortage — and workers are living in company-owned "man camps" like this one outside the town of Williston. Gregory Bull/AP hide caption

The North Dakota oil boom has produced a housing shortage — and workers are living in company-owned "man camps" like this one outside the town of Williston.

A couple months ago, Jake Featheringill and his wife got robbed.

It wasn't serious. No one was home at the time, and no one got hurt. But for Featheringill, it was just the latest in a string of bad luck.

"We made a decision," he says. "We decided to pick up and move in about three days. Packed all our stuff up in storage. Drove 24 straight hours on I-29, and made it to Williston with no place to live."

That's Williston, ND. Population — until just a few years ago — 12,000. Jake was born there, but moved away when he was a kid. He hadn't been back since.

"We came in right through the stretch of where the Badlands is," he remembers. "And then you come into the town. So many trucks. Semi trucks and four-wheel-drive pickups — for a mile straight. You've never seen so many trucks in your life."

Those trucks were in North Dakota for one reason — the same reason Featheringill had decided to move his wife and three kids to a remote section of western North Dakota.

Two years ago, America was importing about two thirds of its oil. Today, according to the Energy Information Administration, it imports less than half. And by 2017, investment bank Goldman Sachs predicts the US could be poised to pass Saudi Arabia and overtake Russia as the world's largest oil producer.

"For many years, they knew that there was oil in that area, but the technology wasn't available to get it out," the town's mayor, Ward Koeser, tells weekends on All Things Considered host Guy Raz.

But in the last few years, advances in such technologies as "fracking" and horizontal drilling have made, by some estimates, as much as 11 billion barrels of oil available in the Bakken formation under North Dakota and Montana.

"There's oil companies coming from all over the country now." Koeser says.

Williston has skipped the recession entirely. Unemployment there is less than 2 percent. The population, the mayor estimates, has grown from 12,000 to 20,000 in the last four years.

"We actually have probably between 2,000 and 3,000 job openings in Williston right now," Koeser says.

Oil workers like Jake Featheringill are fueling Williston's population growth. He's working as a shophand for Baker Hughes, making enough to support his wife and three children. But with such a sudden population increase, Williston's infrastructure can't keep up.

"When we came up here, we were told housing was tough but not impossible," Featheringill says. He and his wife got lucky and borrowed an RV from a family friend. "We got lucky again and got to park the RV in a place where we were rent-free. Most of the RV spots around here run $1,000 to $1,200."

"It's the old boom-town syndrome," says Charles Groat says, professor of energy and mineral resources at the University of Texas in Austin.

A small town like Williston, he says, can be burdened by a sudden oil boom. 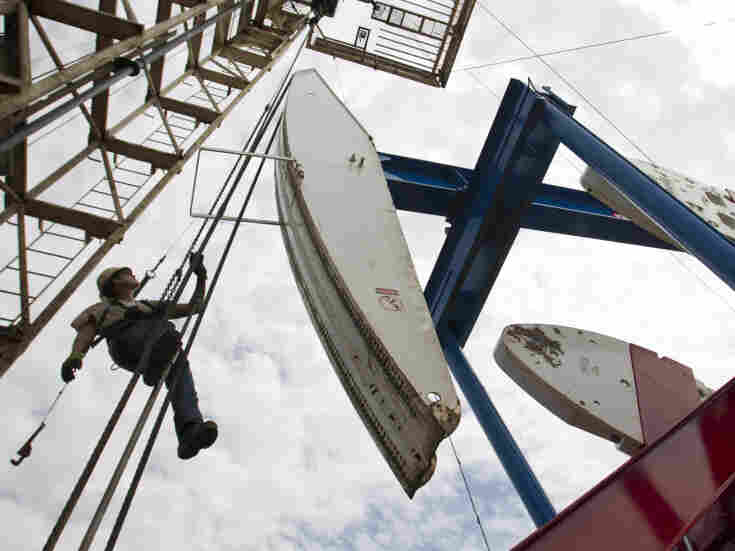 Ben Shaw hangs from an oil derrick outside Williston, ND, in July 2011. Williston's mayor, Ward Koeser, estimates that the town has between 2,000 and 3,000 job openings for oil workers. Gregory Bull/AP hide caption 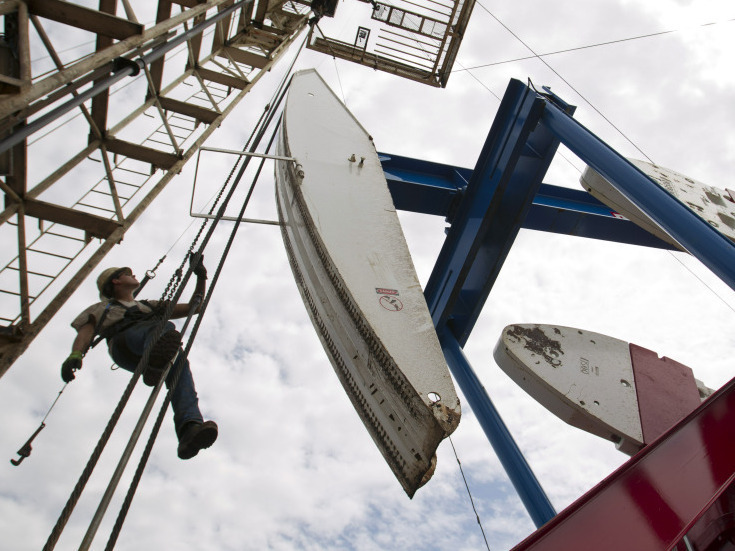 Ben Shaw hangs from an oil derrick outside Williston, ND, in July 2011. Williston's mayor, Ward Koeser, estimates that the town has between 2,000 and 3,000 job openings for oil workers.

"All the workers. And then you have roads and trucks and pipelines. And then you have all the community services that have to be provided — law enforcement, education. So it turns into a real bonanza in terms of income, but it becomes an environmental effect that people aren't used to experiencing."

In Williston, many workers forgo prices as high as $2,000 a month to rent a small apartment and instead live in "man camps," massive group-housing provided by their companies.

"Just a little room with a bed and a TV," Mayor Ward Koeser explains. "And then they have recreation areas."

"Horizontal drilling — accessing a huge area of reservoir — and then the fracking process, which props opens those cracks, and allows the liquid or gas to flow to the well," Groat says. "That's what's made shale gas and shale oil such a viable resource."

But those techniques also raise environmental concerns that Groat is studying.

"There is a danger, here – the fact that we drill so many wells," he says. "If you look at the numbers of wells that have been drilled in North Dakota, just in recent times, the numbers of wells are huge, which increases the opportunity for bad things to happen environmentally or procedurally in developing the resource. We also are not dealing, of course, with the question of greenhouse gases and carbon dioxide as we continue our hydrocarbon dependence."

Amy Myers Jaffe of Rice University says in the next decade, new oil in the US, Canada and South America could change the center of gravity of the entire global energy supply.

"Some are now saying, in five or 10 years' time, we're a major oil-producing region, where our production is going up," she says.

The US, Jaffe says, could have 2 trillion barrels of oil waiting to be drilled. South America could hold another 2 trillion. And Canada? 2.4 trillion. That's compared to just 1.2 trillion in the Middle East and north Africa.

Jaffe says those new oil reserves, combined with growing turmoil in the Middle East, will "absolutely propel more and more investment into the energy resources in the Americas."

Russia is already feeling the growth of American energy, Jaffe says. As the U.S. produces more of its own natural gas, Europe is free to purchase liquefied natural gas the US is no longer buying.

"They're buying less natural gas from Russia," Jaffe says. "So Russia would only supply 10 percent of European natural gas demand by 2030. That means the Russians are no longer powerful."

The American energy boom, Jaffe says, could endanger many green-energy initiatives that have gained popularity in recent years. But royalties and revenue from U.S. production of oil and natural gas, she adds, could be used to invest in improving green technology.

"We don't have the commercial technology now," she says, noting the recent bankruptcy of American solar companies like Solyndra.

"The point is you can't force a technology that's not commercial. Rather than subsidize things that are not going to be competitive, we need to actually use that money to do R&D to create technologies — the same way that the industries created these technologies to produce natural gas and it turned out so commercially successful."