Accessibility links
Air Force And Navy Turn To Biofuels The military is trying to make big changes in what fuel it uses. The Air Force and Navy have been testing their aircraft — everything from fighters to unmanned spy planes — on fuel made from vegetable oil or even animal fat. One catch: It costs 10 times the price of traditional fuel. 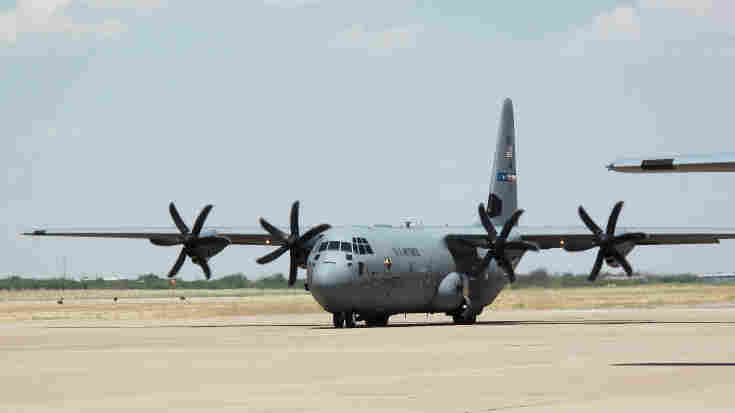 This C-130 is just one of a growing list of military aircraft that have successfully flown on a 50 percent blend of jet biofuel. Half of the fuel powering this plane at Dyess Air Force Base in Abilene, Texas, is made from a weedlike plant called camelina. Elizabeth Shogren/NPR hide caption

The Pentagon's hunt for an alternative to petroleum has turned a lowly weed and animal fat into something indistinguishable from jet fuel, and now the military is trying to kick-start a new biofuel industry.

"To flip the line from Field of Dreams, if the Navy comes, they will build it," Navy Secretary Ray Mabus said in a recent speech.

The Air Force and the Navy have been busy testing their aircraft — everything from fighter jets to unmanned spy planes — on jet biofuel. Together with the Departments of Energy and Agriculture, the Navy has launched a project to invest up to half a billion dollars in biofuel refineries.

Mabus says he is committed to getting 50 percent of the Navy's fuel for aircraft and surface ships from renewable sources by 2020 because dependence on foreign oil makes the U.S. military vulnerable.

"We buy too much fossil fuels from potentially or actually volatile places on earth," Mabus says.

There are lots of negative consequences of relying on foreign oil. For instance, when conflicts abroad spook the petroleum market, the military faces massive increases in fuel costs.

The fast pace of the development of jet biofuel has surprised even the experts.

After President George W. Bush called on the country to kick its addiction to foreign oil several years ago, the Air Force first focused on turning coal into liquid fuel. But it soon switched its focus to biofuels. 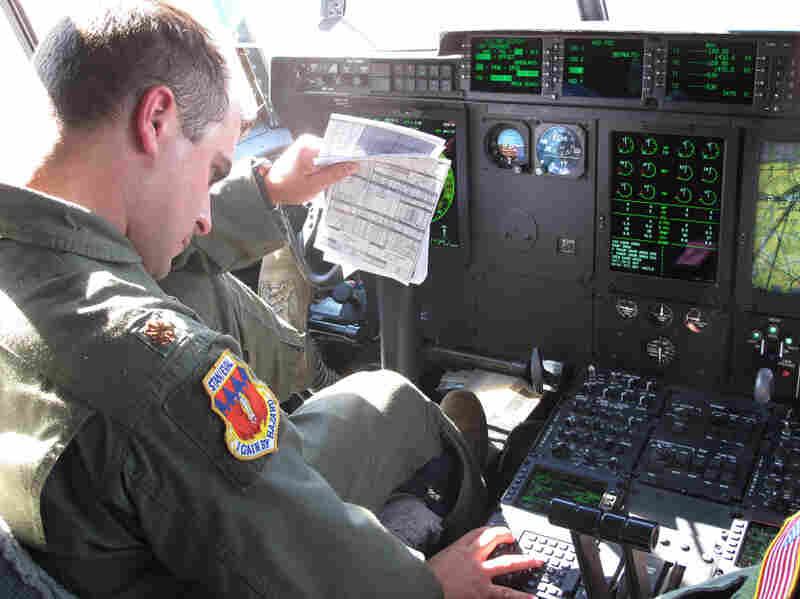 "When we first started, nobody had any clue that the biofuels were so close behind," says Jeffrey Braun, who heads the Air Force biofuels program. "We thought it was going to be another 10 years before we started looking at biofuels but it turned out it was about two years."

High-tech chemical processing makes the jet biofuel nearly indistinguishable from petroleum jet fuel. It doesn't matter whether refiners start with beef fat, leftover cooking oil or a plant like camelina. Camelina is promising because it can be grown on fallow wheat fields so it doesn't displace food crops, and tests show it can reduce greenhouse gas emissions 80 percent compared with petroleum.

Already, the Air Force has approved F-15 and F-16 fighters and C-17 transport planes to use 50 percent biofuel. The Navy plans to approve all its planes and surface ships to run on green energy by the end of the fall.

The Air Force hopes to get half of the fuel it uses for domestic flights from alternative sources by 2016. But the small batches of biofuel made so far cost about 10 times the price of traditional fuel. Braun says that's a hurdle for Pentagon officials.

"They're committed as long as they can get these fuels at cost-competitive pricing. So that means that industry is going to have to step up their production and start creating much larger quantities of fuel," he says.

Producers say that has created a classic chicken and egg problem.

"To build a refinery at scale is hundreds and hundreds of millions of dollars. If you don't have known customers you will not ever build that facility," says Tom Todaro, CEO of Altair, a company turning camelina into jet fuel.

The military isn't the only potential big customer. Airlines want jet biofuel too, but they're not in the best financial shape to back a new industry.

"We can't get there by ourselves," Sharon Pinkerton, a vice president of the Air Transport Association, told a recent Senate hearing.

Industry officials hope the federal government's effort will help the nascent industry get off the ground.

In addition to the program to help fund new refineries, the Agriculture Department has awarded incentives to lure farmers to start growing camelina.

A pioneer in the biofuel industry predicted that the federal investment will enable the Navy to reach its renewable fuel targets and create a "snowball effect" that will make it easier to start supplying commercial airlines with biofuel too.

"That's why I'm very excited about what the government and the administration are doing because I think this is going to be a fantastic kick-start for the advanced biofuel industry," says Jim Rekoske, a vice president of Honeywell UOP's renewable energy unit, which developed the jet biofuel.