Accessibility links
U.S.-Pakistan Ties On Downward Spiral Adm. Mike Mullen said last week that Pakistan's intelligence agency had a role in several high-profile attacks in Afghanistan, including one earlier this month on the U.S. Embassy in Kabul. The comments led to sharp denials from Pakistan and increased concerns about a new crisis between the two countries. 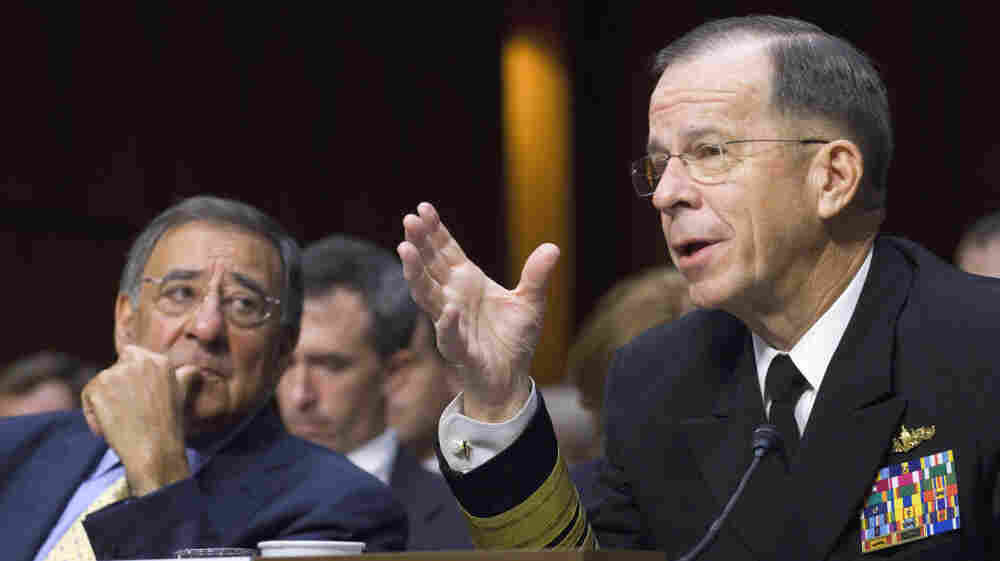 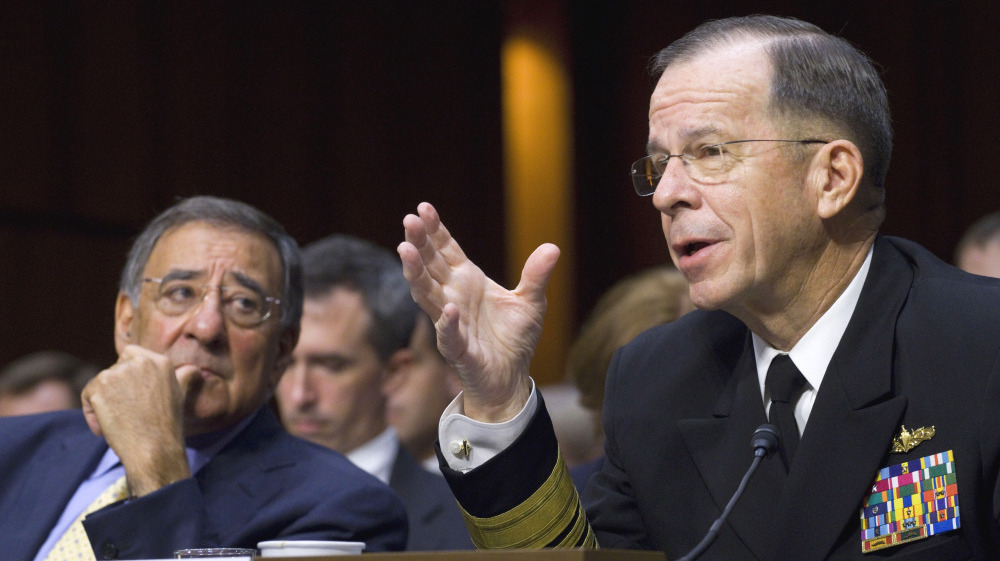 The fragile and troubled relationship between the U.S. and Pakistan is on a deep, downward spiral. Adm. Mike Mullen, the chairman of the Joint Chiefs of Staff, said last week that Pakistan's intelligence agency had a role in several high-profile attacks in Afghanistan, including the attack earlier this month on the U.S. Embassy in Kabul.

Mullen's comments made public an implication that many officials in Washington and Afghanistan have long voiced only in private — that Pakistan's premier intelligence agency, the ISI, supports insurgent groups, including the Haqqani network, one of the most dangerous, based in Pakistan's tribal region. 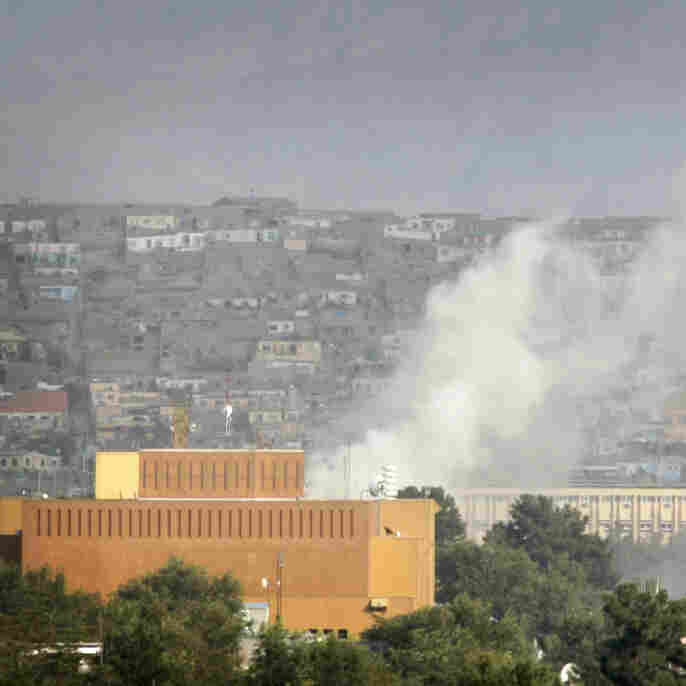 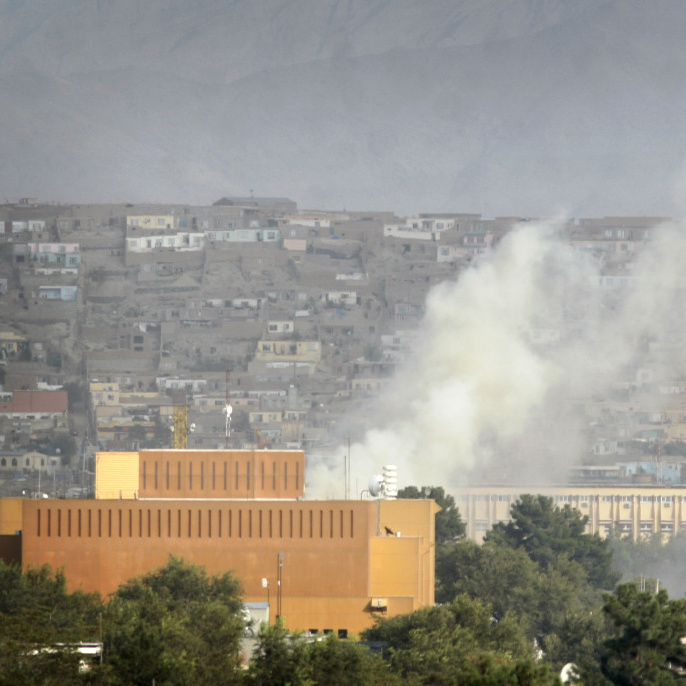 Dust rises after firing by Taliban militants in Kabul, Afghanistan, after Taliban insurgents fired rocket-propelled grenades and assault rifles at the U.S. Embassy earlier this month.

Mullen said the Haqqani network, which launches attacks against Western troops in neighboring Afghanistan, acts as a veritable arm of the spy agency. His comments signal a more confrontational stance against Pakistan. Daniel Markey, a senior fellow at the Council on Foreign Relations, says Mullen's forceful language was striking in its tone and substance.

"The implication is that the United States government is saying with one voice that if Pakistan does not end its ties with the Haqqani network, the U.S. will expand its unilateral actions to destroy that network, whether Pakistan likes it or not," Markey says.

Markey says the U.S. could expand its drone strikes in North Waziristan, where the Haqqani network is believed to be based. But he says things could go further, such as launching raids using U.S. Special Forces.

"You could see conventional forces in Afghanistan moved up to the Pakistan border to support cross-border attacks that would probably start out small but could expand," he says. "And you could see a variety of other combined efforts that could even include a more extensive bombing campaign that went beyond the use of drones."

On Sunday, Gen. Ashfaq Kayani, Pakistan's army chief, called in his commanders for a special meeting to discuss the security situation. That was an unusual move, says retired Army Lt. Gen. David Barno, a senior fellow at the Center for a New American Security.

"Their media people coming out of that said that Pakistan intends to defend its borders from incursions from Afghanistan," Barno says. "So I think they're signaling that they're not going to tolerate any U.S. ground intervention certainly into Pakistan."

Barno says Pakistan considers any ground incursion — any raid by American Special Forces or the like — as crossing a red line, and that the U.S. could face a significant backlash. Among other things, Pakistan could shut down critical land and air routes needed to shuttle military supplies into Afghanistan. Still, Barno says the U.S. has to consider when it reaches a point where it has to take that risk.

"I don't think we've ruled anything out entirely," he says.

Barno says there's probably a debate going on to sort out what things can be done, and what lines the U.S. can or should cross at this point. He says the uprooting of the Haqqani network is part of that strategic calculation, especially as the U.S. begins winding down its operations in Afghanistan in 2014.

Barno says it's clear that Washington has lost patience with Pakistan's reluctance or inability to go after militants on its own soil. Shuja Nawaz, director of the South Asia Center at the Atlantic Council, says this is probably the worst he's seen relations between the two countries in a very long time.

"I see the mood darkening in Washington, and I fear that it may lead to unilateral action," Nawaz says. "But historically, whenever the U.S. has put such sharp pressure on Pakistan to do certain things on behalf of the U.S., the Pakistanis have not reacted well at all."

Nawaz says the U.S. and Pakistan need some clear-headed thinking to get out of this situation because the two sides need each other — at least for the next few years.