Accessibility links
Public Outrage Grows As Greece Looks For More Cuts Inspectors from the European Union, the Central Bank and the International Monetary Fund return to Athens for a fiscal audit that will determine whether Greece gets bailout funds. But deep distrust of creditors has sparked violent protests and transit strikes. 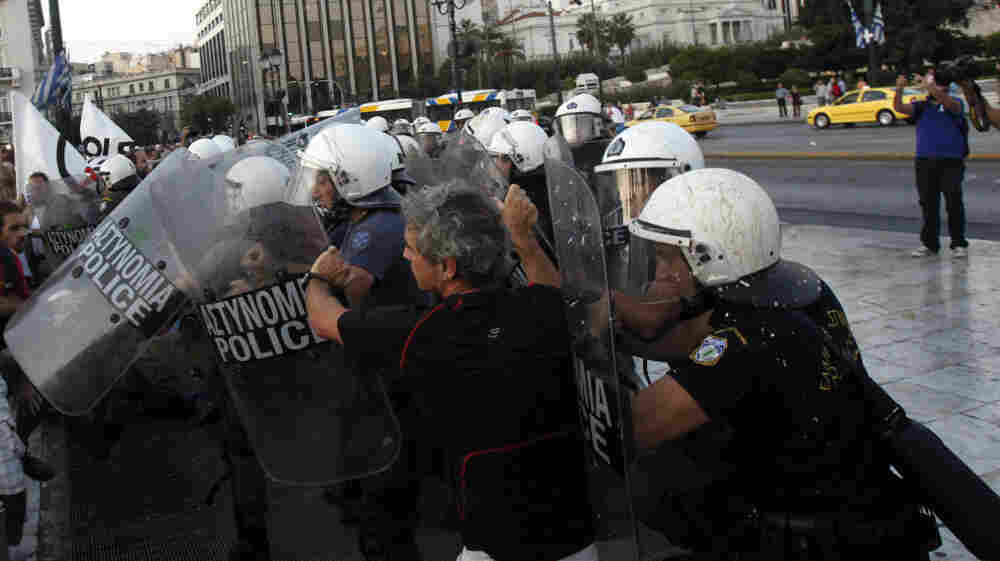 Riot police officers push back a protester during an anti-austerity protest Sunday in front of the Greek Parliament in Athens. Kostas Tsironis/AP hide caption 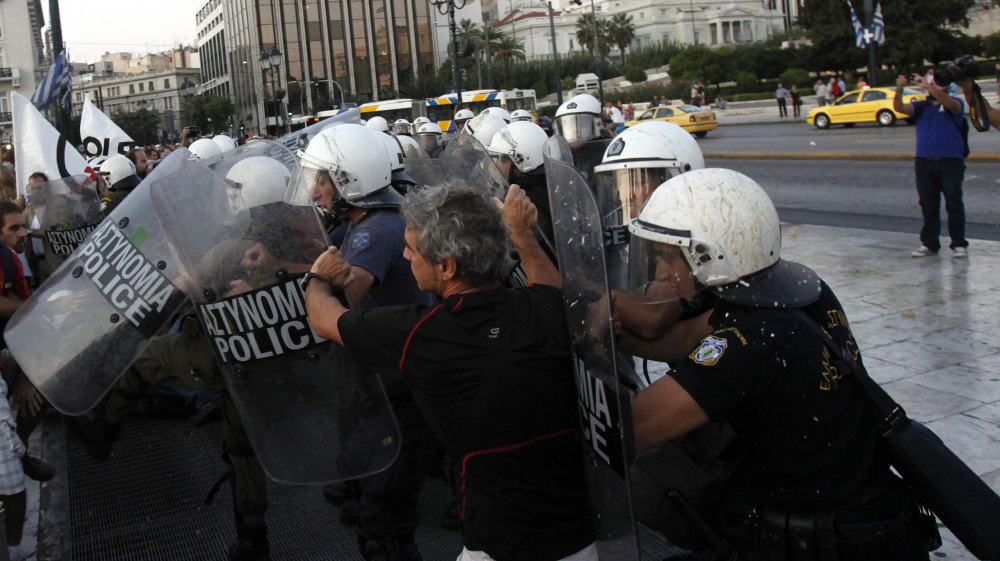 Riot police officers push back a protester during an anti-austerity protest Sunday in front of the Greek Parliament in Athens.

As Greece waits for international inspectors to return to Athens this week for a fiscal audit that will decide whether it gets vital bailout money, deep distrust of foreign creditors sparked violent protests and transit strikes.

A phalanx of riot police wielding bats and tear gas clashed with the demonstrators, some of whom were gathering signatures to call for an independent review of Greece's debts.

"We are hoping lots of Greek people will ask for this audit," protester Anna Anastasea said. "We don't have hope this party will do this audit."

She said she is convinced that the government and international lenders cooked the books to make Greece the scapegoat of the global financial crisis.

A group of students later occupied the state-run TV studios to protest against brutal cuts in education.

After a year and a half of austerity measures and spiraling recession, Greece's government has been issuing new measures by the week — slashing pensions and public sector wages, furloughing 30,000 civil servants, and creating new income and property taxes — to convince creditors that it can rein in the budget deficit so that they will release $11 billion of a $150 billion bailout deal.

Parliament was scheduled to vote Tuesday on a controversial new property tax measure that, if it passes, is likely to further inflame the public.

The Greek media — left to right — say the government's economic policy is ineffective, impoverishing the population without offering a way out.

"If we know anything since 1929," he says, "once you are caught in a triple crisis of public debt, recession in private sector, and cessation of investment in public and private, then you can cut to your heart's content, but you are not going to cut the deficit and make inroads into the debt."

Greece's gross national product has plummeted for three years in a row, and the number of unemployed could soon top 1 million out of the 11 million people in Greece.

Economist Jens Bastian, a fellow at the Eliamep think tank in Athens, says Greece has little choice, having given up much of its sovereignty.

"When you sign up to a program with the troika that has a very ambitious reform agenda, including very harsh austerity measures, and you are dependent on a quarterly basis on evaluations and monitoring reports, then you do not hold your destiny anymore in your hands," Bastian says.

Many financial experts and bankers are becoming convinced that Greece can't pay its huge debt — some $475 billion — and are preparing for default.

Economist Costas Lapavitsas of the University of London says default is inevitable but that the process should be led by Greece. If international lenders took charge, he says, it would be disastrous for the country.

Many Greek commentators lament that the austerity measures target the middle class, which is most of the country's population.

More than 100,000 small businesses have closed over the past year, youth unemployment is more than 40 percent, and the poverty line is one of the highest in Europe.

An editorial in the conservative daily Kathimerini asks: "How will the newly impoverished middle class pick up the pieces and move on?"

"To say the Greek people have to go through this incredible austerity to face basically the destruction of social life as this country has known it for decades in order to rescue the financial system is nonsense," he says.