Accessibility links
Few Consumers Are Cracking The QR Code The pixelated images meant to be scanned on a smartphone to take the user to a website may be too involved for too little reward, branding consultants say. Though the codes are more prevalent, only 6 percent of mobile subscribers in the U.S. scan them, and a newer technology may soon overtake it. 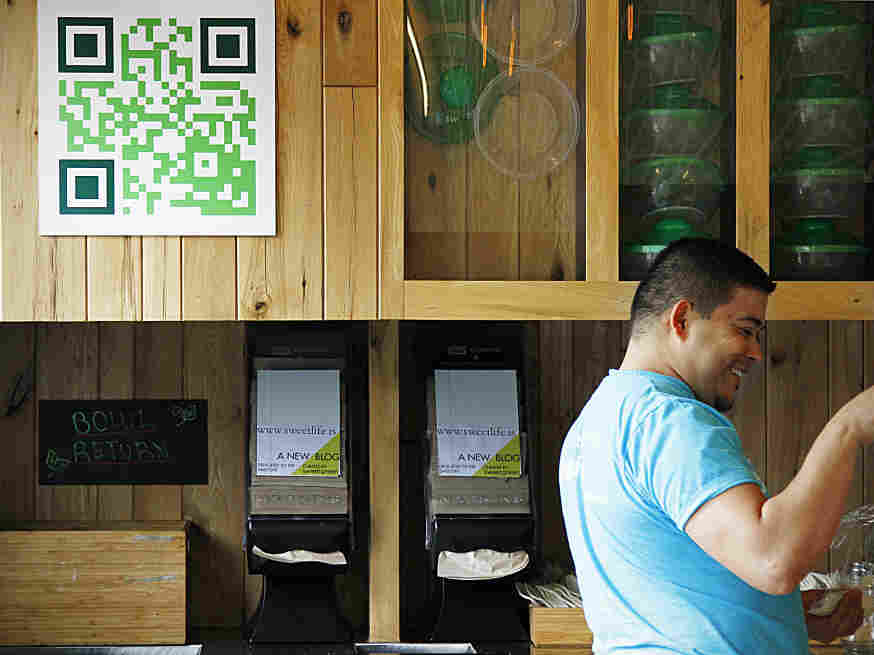 Manuel Martinez, the manager of a popular salad restaurant in Washington, D.C., called Sweetgreen, assists a customer. Martinez says customers use the QR code on the wall to learn about promotions and to get discounts. Mallory Benedict/NPR hide caption

If you drive by billboards or flip through magazines from time to time, you may have noticed pixelated squares popping up all over the place. These aren't scrambled checkerboards or alien landing pads, but QR codes, short for quick response codes.

The codes are scanned with a smartphone camera, kind of like one might scan a bar code, and marketing departments all over the country are coming up with clever ways to use them.

Back in 1994, when bar codes ruled the digital scanning universe, the automotive components company Denso Wave Inc. developed QR codes as a better way to track car parts for Toyota. 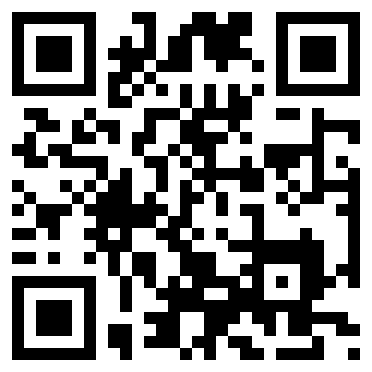 A QR code holds data both horizontally and vertically, unlike a bar code, which holds information only horizontally.

The square shape allows the QR code to store approximately 90 alphanumeric characters for a standard 33x33 square, while a UPC code holds only 12 numerals.

A study by comScore found that 14 million mobile phone users scanned QR codes in June; half of them did so through magazines and newspapers. The codes are used to share:

—A greeting for fellow digiphiles on T-shirts

Now, they're more than just axle trackers. At the salad restaurant Sweetgreen in Washington, D.C., there's a huge square on the wall hanging over the napkin dispenser.

"It looks like some arcade game from the '80s," says customer James Mitchell as he's waiting for his salad.

Mitchell has a smartphone but says he doesn't use it to scan the pixelated QR codes because they frequently take him to advertisements. Fellow customer Rachel McLaughlin isn't familiar with the technology.

"It kind of looks like a television that's out of order," she says.

What Sweetgreen wants McLaughlin to do is whip out her phone and take a picture of the broken-television, arcade-game thing.

"It's ... one of those scanner things, where you just scan it and it tells you whatever information is behind it," explains Elizabeth Burkes, another customer at the restaurant.

A smartphone app will interpret the picture, and link the phone to a website with product information or coupons. Sweetgreen was an early adopter of QR codes.

"We would use them in stores, and you snap a picture of the code, and then the link directs you to some sort of website, [or] a landing page on your phone. It could be a ticket to something, it could be a coupon," says McKee Floyd, director of brand development for Sweetgreen.

But Floyd is a QR skeptic. She says it takes too long to unlock your phone, fire up the app, take the picture and wait for the page to load.

"The issue I have with QR codes is that marketing is a little bit like telling a joke, and the longer the joke, the better the punch line has to be — and [using] QR code is a really long joke," Floyd says.

Is It Catching On?

According to a recent study from digital analyst comScore, a measly 6 percent of mobile subscribers currently use the technology. That 6 percent tends to be male, white and wealthy.

"That's partly why there hasn't been a massive uptake, although that's changing as the smartphone market starts to expand," says Oliver Williams, founder of the online marketing agency Oliver Digital.

Williams says they're used for digital treasure hunts and for grocery shopping; they're on cupcakes, coasters and in catalogs. In Japan, where smartphones are more widely used, Williams says, there are QR codes on tombstones, so when you scan them you see a photo of the person who died.

Marketing is a little bit like telling a joke, and the longer the joke, the better the punch line has to be — and [using] QR code is a really long joke.

But there's now something on the horizon that both Williams and Floyd say could replace QR codes: near field communication, or NFC.

Unlike QR codes, this technology is being used to pay for things. So instead of using a credit card to pay for your salad, you'd just tap your phone to a plate by the register, and the transaction will file with your bank and the business.

"With near field communication, you're dealing with transactions that people can profit from," Williams says. "The banks have got an interest because every transaction that occurs, they take a percentage."

Last week Google launched its first NFC app, called Google wallet. It seems that by the time people finally figure out what QR codes are good for, they might just be swiping past them at the checkout line.

The audio and a previous Web version of this story incorrectly characterized James Mitchell as unfamiliar with QR codes. He is in fact familiar with the technology but chooses not to use it.