Accessibility links
'Heart And Soul': An African-American History Illustrator and author Kadir Nelson tells the African-American story — from Colonial times through the civil rights movement — in his new children's book, Heart and Soul. 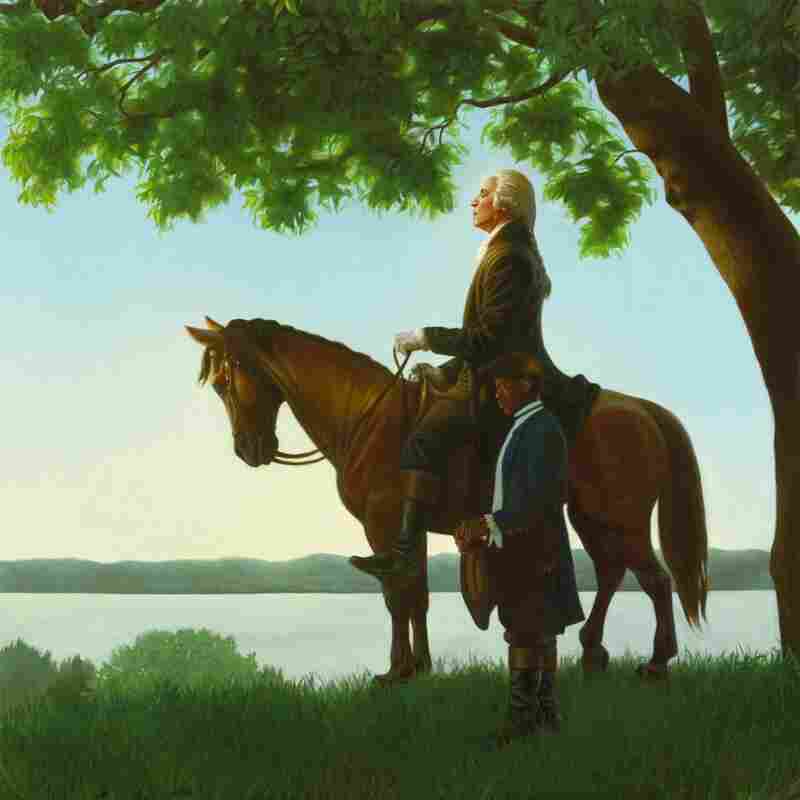 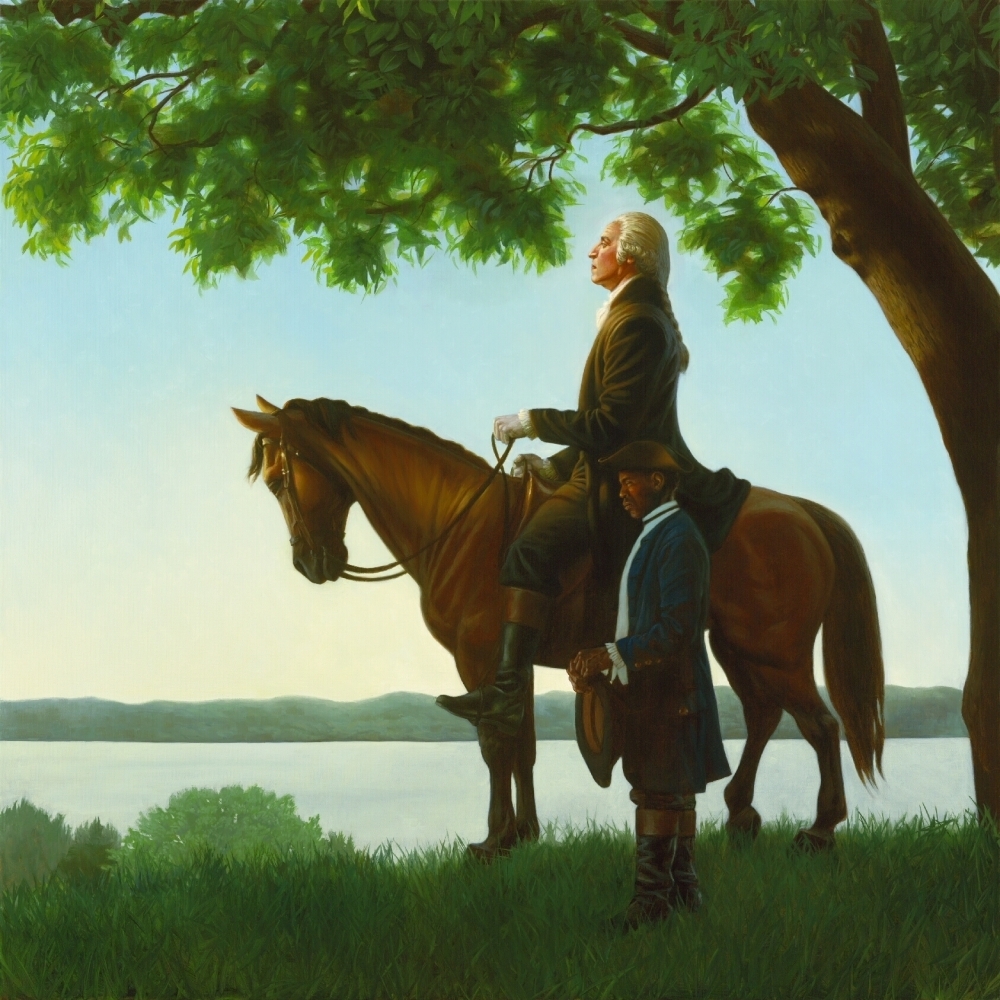 Kadir Nelson uses light to explore the irony of an new nation celebrating freedom and independence while keeping slavery legal.

The American story is filled with hard truths. They're woven tightly into our history, and they're impossible to ignore.

So how do you teach children the whole American story — from the violence to the racism to the slavery — when so much of it deals with the very things parents try to shield kids from? That's the challenge illustrator and author Kadir Nelson takes up in his new book, Heart and Soul: The Story of America and African Americans.

Nelson's book tracks the history of America and African-Americans from Colonial times through the civil rights movement, and he tells the story in a voice that was inspired by the people around him.

"I love my grandmother to pieces, so I thought maybe I'd use my grandmother's voice because she really gives it to you straight, she's the matriarch of our family. But I also wanted to sweeten it up a little bit," he tells NPR's Michele Norris. "I thought of my friend Debbie Allen, who's from Texas. She talks with a bit of a Texas twang, and she puts 'honeys' and 'childs' at the end of every sentence to sweeten it up a bit. So I would combine these two voices to find a voice for this narrator." 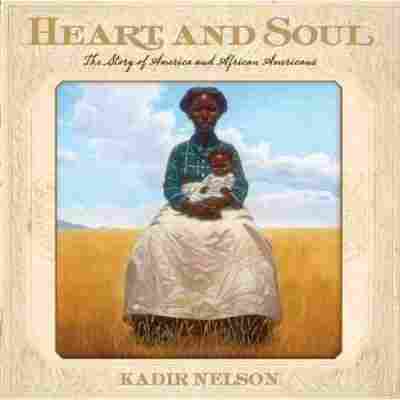 The Story of America and African Americans

'This Great Story About Freedom'

Nelson begins his American history with the Declaration of Independence and the role that African-Americans played in that independence. One of the book's first images shows George Washington sitting on a horse with the sun shining in his face. Beside him stands his slave.

"I think it was the irony of this country that [was] created with the concept of freedom, yet a large part of the population [was] held as slaves," he says. "So we start this great story about freedom, and then we have our first president sitting on his horse; he's proud of his achievement, and yet his slave is sitting there holding his hat."

Washington looks proud with his chin held high, but it's harder to read the slave.

"The sun is rising, the sun is very bright on George Washington," Nelson says, "but when you look at the slave, it's barely hitting his face because he's looking into the sun and kind of wondering what the future holds not only for him but for the rest of his African-American brethren."

'The Quiet Anger And The Quiet Strength'

Nelson's book also shows defiance. One image has black schoolchildren crossing the color line; their arms are crossed, and they look up with a kind of steely resolve — it's a powerful expression. 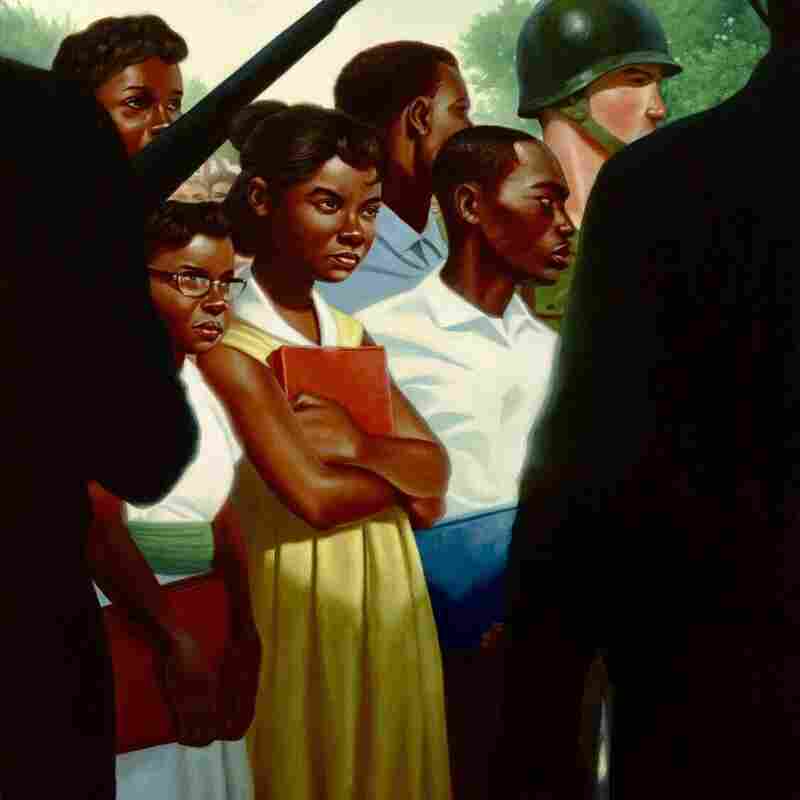 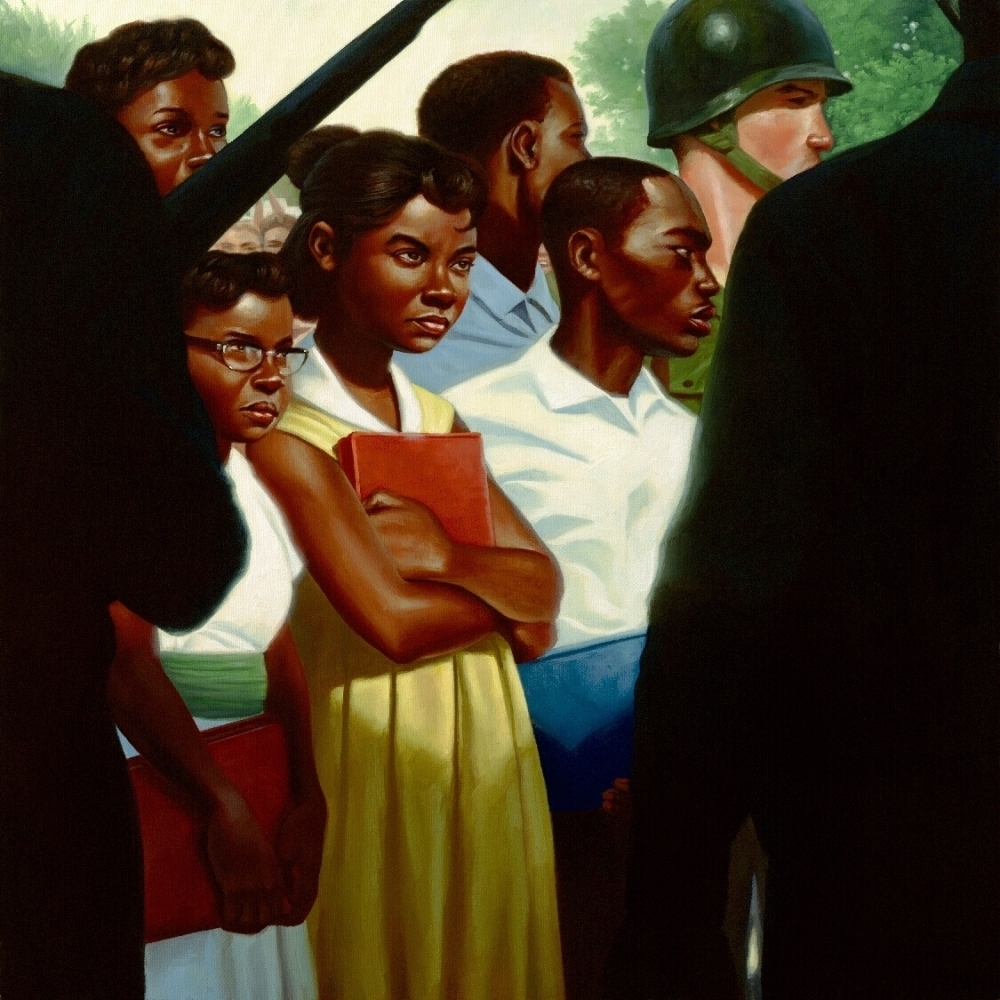 Nelson creates complex shadows to heighten the drama of his image of schoolchildren.

So it's fitting that Nelson used people from his own life — his wife and his daughter — as models for the schoolchildren image.

"I asked my daughter to stand hands folded, [and] asked her not to smile," he says. "She really was a bit shy and didn't want to do it anyway, so that kind of helped, because she was a bit defiant in wanting to pose."

The reader views the students from the perspective of another child observing the scene from between grown-up silhouettes. It's a point of view that acknowledges Nelson's young audience, but it's also extremely dramatic.

Nelson says he learned a lot about how to use perspective while working as a visual development artist for Steven Spielberg's 1997 film Amistad.

"I studied Steven Spielberg's films to see how he composed his different shots, and one of the devices that he uses is you have the foreground, middle ground and background. And often he'll use the foreground to frame the shot, whether it's someone in shadow or what have you. And it's a really great device to add drama, especially when you're dealing with lights and darks," he says. "That's one of the devices I use to heighten the drama, especially in this drawing." 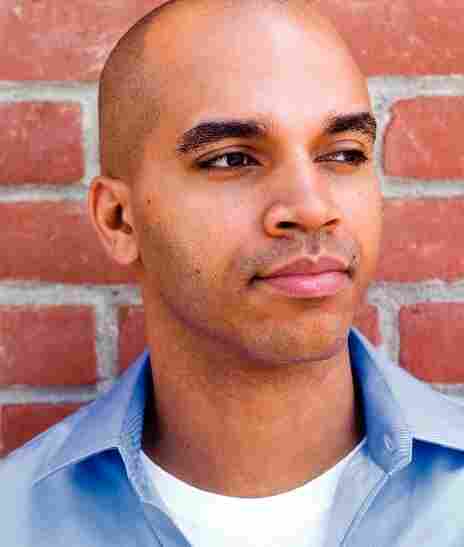 Kadir Nelson's works include We Are the Ship: The Story of Negro League Baseball. David Harrison/ hide caption 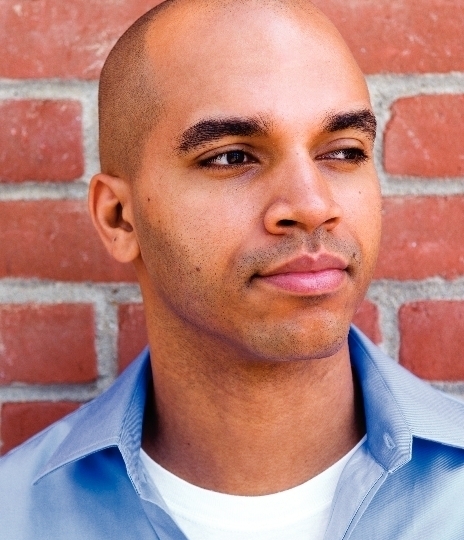 Kadir Nelson's works include We Are the Ship: The Story of Negro League Baseball.

'Our Nation's Heart And Soul'

Light and darkness play key roles in Nelson's book, from the light that hits George Washington to the light that doesn't hit his slave, to the silhouettes that frame the schoolchildren. They are, of course, used for dramatic effect, but they also serve to illuminate the uglier side of American history — a side that, while unpleasant, is still part of an ever-evolving American experience.

And that's the lighter note on which Nelson chooses to end his story. He writes:

"We have come a mighty long way, honey, and we still have a good ways to go. But that promise and the right to fight for it is worth every ounce of its weight in gold. It's our nation's heart and soul."

Read an excerpt of Heart and Soul