Accessibility links
Greece OKs New Property Tax To Boost Revenue Before the vote, the finance minster stressed that the government had no choice but to impose the tax as it fights to reduce the deficit. The tax will be charged through electricity bills; those who refuse to pay it risk having their power cut off. 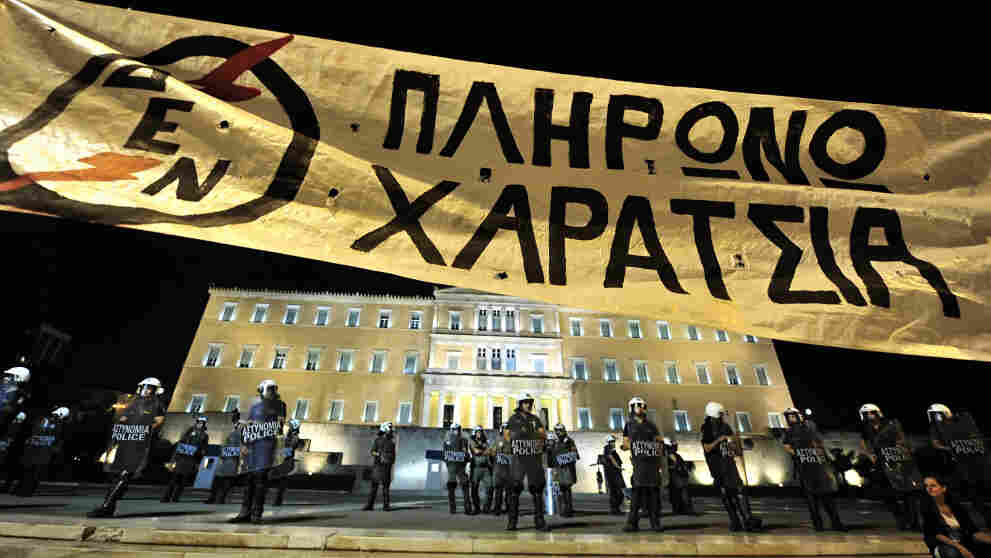 Greek lawmakers approved a controversial new property tax Tuesday that aims to boost revenue as the country struggles to obtain a critical installment of international bailout loans that will prevent it from default.

The new tax passed 154-143 in the 300-member parliament. It was announced earlier this month after international debt inspectors suspended their review of Greek reforms amid talk of missed revenue targets and delayed implementation of austerity measures. The inspectors are expected to return to Athens this week.

Greece must receive an 8 billion euro ($11 billion) rescue loan before mid-October to stave off bankruptcy, a collapse that would send shock waves through financial markets in Europe and the world. But creditors have demanded more efforts to raise revenue. 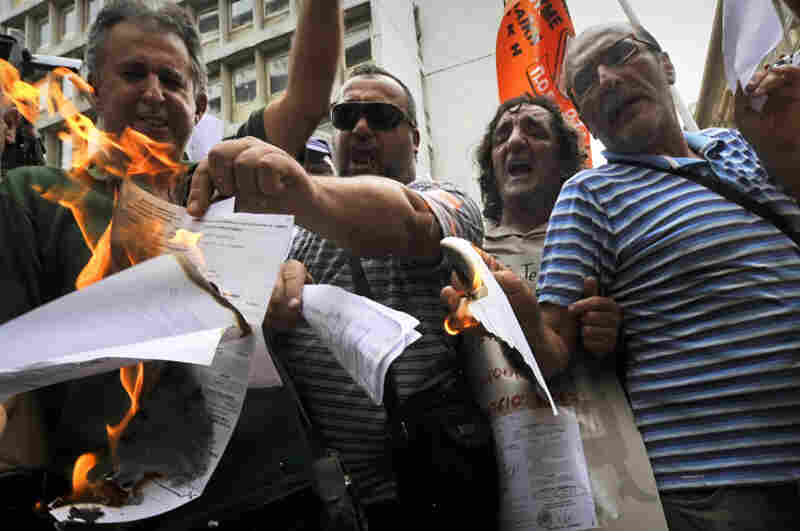 Speaking at a press conference before the vote, Finance Minister Evangelos Venizelos acknowledged the new tax was harsh on some, but stressed the government had no choice but to impose it as it fought to reduce its budget deficit.

"If we lose this, our country will go back many decades," he said. "That will be a catastrophe, the equivalent of losing a war."

Venizelos said he and Prime Minister George Papandreou will send letters of written assurances demanded by the inspectors to guarantee the government will meet its obligations.

The extra charge has deeply angered Greeks, who have already been through more than a year of sharp austerity that has seen salary and pension cuts, and increased taxes across the board.

Outside the press conference, striking Finance Ministry workers tried to drown out their boss with honking horns and sirens. "No new cuts. Take your bailout and go away," several hundred tax collectors and accounting office employees chanted.

Dakoronias' wife lost her job three weeks ago, and the couple has a small child and pay 700 euros a month on their 30-year mortgage. Now they've been hit by the new property tax — another 600 euros this year.

"I think that they're making all of us poorer, and someone is getting richer and richer," he said.

The new tax will be charged through electricity bills to make it easier for the state to collect, instead of going through Greece's unwieldy and inefficient tax system. Those who refuse to pay risk having their power cut off.

State electricity company unionists have threatened not to collect the tax.

Konstantinos Koutsodimas, the vice president of the powerful GENOP trade union that represents power company employees, said the government had no right to use the public company as a tax collector.

"What we do as a company is we sell electricity," he said. "We are not tax collectors."

Koutsodimas said the union will continue to fight the government's austerity policies and privatization schemes with more strikes, but he worries about the possible outcome of mounting hardship and poverty.

"I really fear a violent social explosion when you have a family that has been programming their economics in a way, and then you have a government that is coming and reversing everything like that," he said. "You can't really control the way those families are going to react."

The media is full of speculation about more measures to come — further tax hikes, public sector layoffs and another round of wage and pension cuts. Speaking to a group of German businessmen in Berlin, Prime Minister Papandreou seemed determined to go on.

NPR's Sylvia Poggioli contributed to this report, which contains material from The Associated Press.