Accessibility links
Recession A Tougher Hit For The Middle-Aged They face more financial demands than other age groups, like supporting a family or paying for their kids' educations, and they're too young to retire. Middle-management positions that were cut during the recession are slow to come back, making competition fierce for those jobs, economists say. 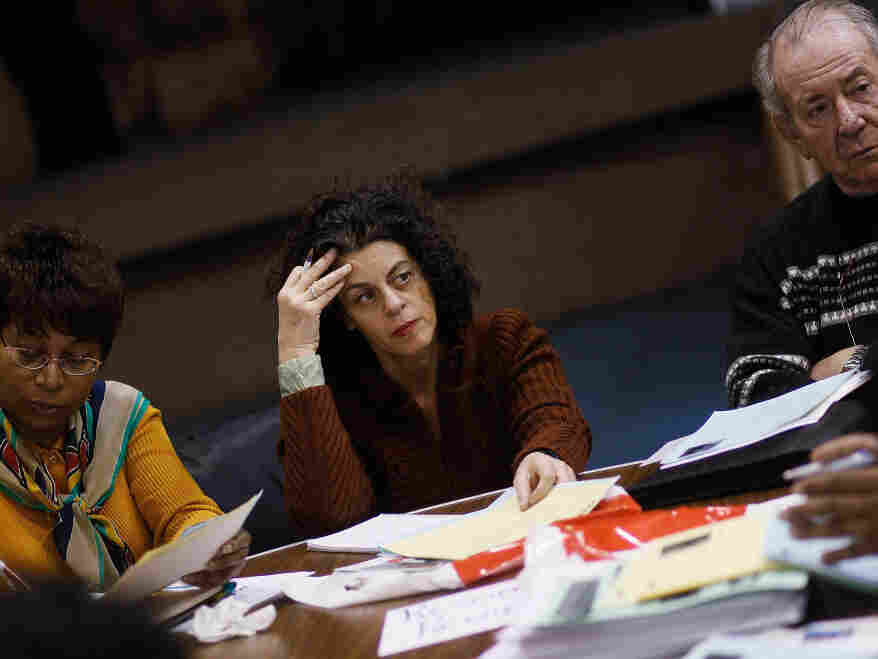 Job seekers participate in a career counseling session targeted to an over-50 demographic in the Harlem neighborhood of New York. Human resources professionals say there are fewer leadership positions available, so it may take middle-aged workers longer to find a good job. Chris Hondros/Getty Images hide caption

Joblessness can be particularly tough for those in middle age. The recession hit this age group hard, and they aren't getting rehired as quickly during the sluggish recovery.

Middle-aged workers face more financial demands than other age groups and are too young to retire, yet they also don't have as much time to work their way up again from the bottom rung like younger workers.

Networking For A New Job

During the Great Depression, a group called 40Plus was founded to help middle-aged professionals find jobs. Some seven decades later, the group's Washington chapter is experiencing a renaissance.

In a rented basement apartment, there's standing room only for about 40 attendees who have come for a lecture on using social networks to look for jobs.

Tamara Miller, 64, is among them. Miller is a rabbi who lost her job as a spiritual counselor at a hospital two years ago. With churches and synagogues strapped for funds, Miller can't find a job, but says she can't afford an early retirement, either.

"I couldn't get Social Security for another year or two, but even then, I couldn't retire," she says.

Miller says she needs the money. In the interim, she writes a blog to keep in touch with parishioners. She says that helps her get the spiritual support that she craves as she deals with joblessness.

"I think people, sometimes they feel lost. And their callings, you know, the thing they thought that that was their purpose in life has been taken away. And who are they without a title ... without a 9-to-5 job?" she asks.

Middle-aged workers typically face more financial pressures, such as supporting a family and paying for their kids' educations.

"They are having to welcome back their grown children, and that means people are retaining expenses and sharing resources for longer periods of time," Morin explains.

The unemployment rate for middle-aged people is less than the population overall, and far less than the rate for very young job seekers. But demographers and labor economists say the recession squeezed middle management, and that those positions are slow to come back.

Their experience doesn't necessarily work to their advantage; sometimes, it makes finding a match for their skills harder. Of the dozen or so middle-aged job seekers I interviewed around the country, many say ageism runs rampant.

A 52-year-old engineer who lost his government job 2 1/2 years ago says experience used to be valued.

"Now all of a sudden we're finding employers don't want us," he says. "Why is this happening? It's because we're older, and there's this false perception out there that we're no longer any good, and we're going to cost more money."

He says many employers believe middle-aged workers are technically obsolete, and that the bias toward hiring younger workers is strong.

Human resources professionals say there's no hard evidence for this youth bias. But they note that there are simply fewer leadership positions available, and the competition for them is fierce — which is why it may take older workers longer to find a good job.

It's taken three years for Elise Negrin to land an entry-level position, and she says she's long given up being choosy.

"I'm working at a nonprofit veterinary clinic. I'm seriously underemployed, and I actively seek work every single day," she says.

Negrin previously was chief operating officer for an auto finance company. Now, she's making $10 an hour. No longer able to afford living in Long Island, N.Y., she moved to Florida earlier this year to live with her best friend, who is unemployed.

Negrin says her response is to try to look younger than her 57 years, at least on paper. She's taking fancy titles off her resume, hoping to camouflage her age and experience.