Accessibility links
Will U.S.-Russia Reset Survive Putin Presidency? President Obama has invested heavily in a "reset" of relations with Russia. But some believe those ties could be strained if Vladimir Putin again becomes Russia's president. 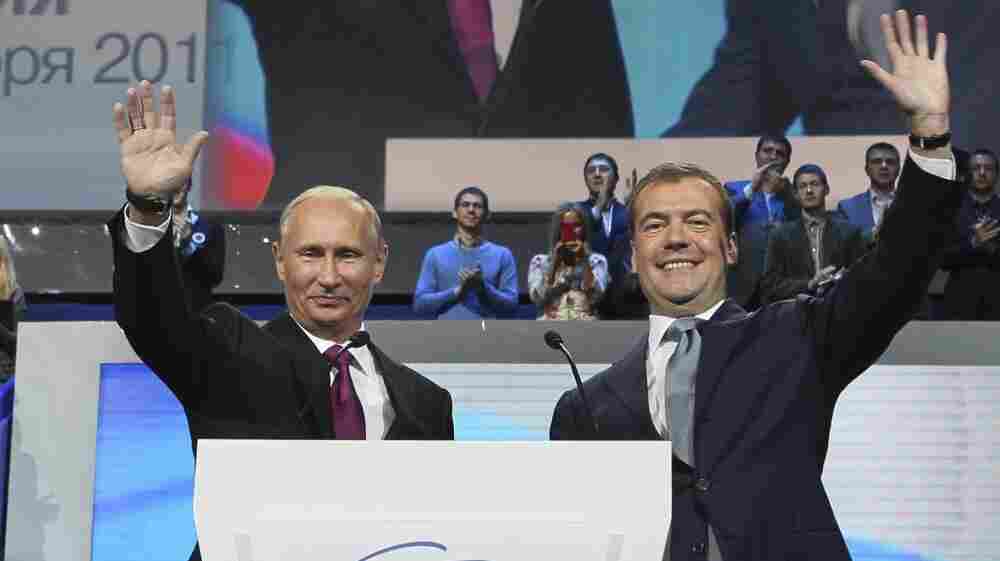 Vladimir Putin's planned run for the presidency next year comes as no surprise to U.S. policymakers. But it may make their lives more complicated and signal a return to more troubled times in U.S.-Russian relations.

Russia's dominant political party, United Russia, nominated Putin as its presidential candidate on Saturday. That virtually assures him that he will return to his old job, which he held from 1999 to 2008. The current president, Dmitry Medvedev, will be the candidate to replace Putin as prime minister.

The Obama administration has invested heavily in resetting relations with Russia, and there have been some successes. The overall atmosphere has improved. The countries reached a new arms control agreement last year. There's been increased cooperation on Iran and Afghanistan.

U.S. officials don't want to jeopardize any of that, and they have been careful not to play into domestic Russian politics this week, saying the U.S. priority is to keep working on improved relations with Moscow. State Department spokesman Mark Toner says the reset of relations is in everyone's interest.

"The question of who will be Russia's next president, that's a decision for the Russian people to determine," Toner said. "We believe clearly that it's in the mutual interests of the United States and Russia and the world that we do work closely together."

That response was predictable says David Kramer, a former State Department official who dealt with U.S.-Russia relations. Kramer, who now runs Freedom House, says the trouble is, President Obama has put so much energy into building a relationship with Medvedev.

"The tone and atmospherics were different under Medvedev," he said. "Medvedev and Obama did develop a rapport that will be almost impossible to replicate with Putin and Obama."

What we are seeing is that the reset reached its heights, say, last summer and now is on a slow downward trajectory.

In June of last year, Obama and Medvedev bonded over burgers at a restaurant in Virginia. And a year earlier, as Obama was setting off to Moscow, he told The Associated Press that he would meet both Medvedev and Putin to make sure they heard the same message.

The U.S. president described the Cold War approaches as "outdated."

"It's time to move forward in a different direction," Obama said. "I think Medvedev understands that. I think Putin has one foot in the old way of doing business, and one foot in the new."

Those are words Obama is now likely to regret, according to Kramer. He says it's clear now to everyone now that Medvedev was just a seat warmer. And even without the musical chairs in the Kremlin, U.S.-Russian relations have been rough lately.

"What we are seeing is that the reset reached its heights, say, last summer and now is on a slow downward trajectory," Kramer says.

The Russians are at odds with the U.S. administration on a number of issues. Moscow has opposed sanctions on Syria and supports the Palestinian efforts for recognition at the U.N. And Republican members of Congress have been critical of Russia's human-rights record and its trade policies.

Kramer predicts that things will only get more challenging with Putin in the Kremlin. Putin has, after all, described the U.S. as a threat and a "parasite."