Accessibility links
America's Love Affair With Nationalism In recent years, Americans have become more nationalistic in their politics, shopping habits, tattoos and even video games. What's behind the rise in patriotic fervor? And is it a good thing? 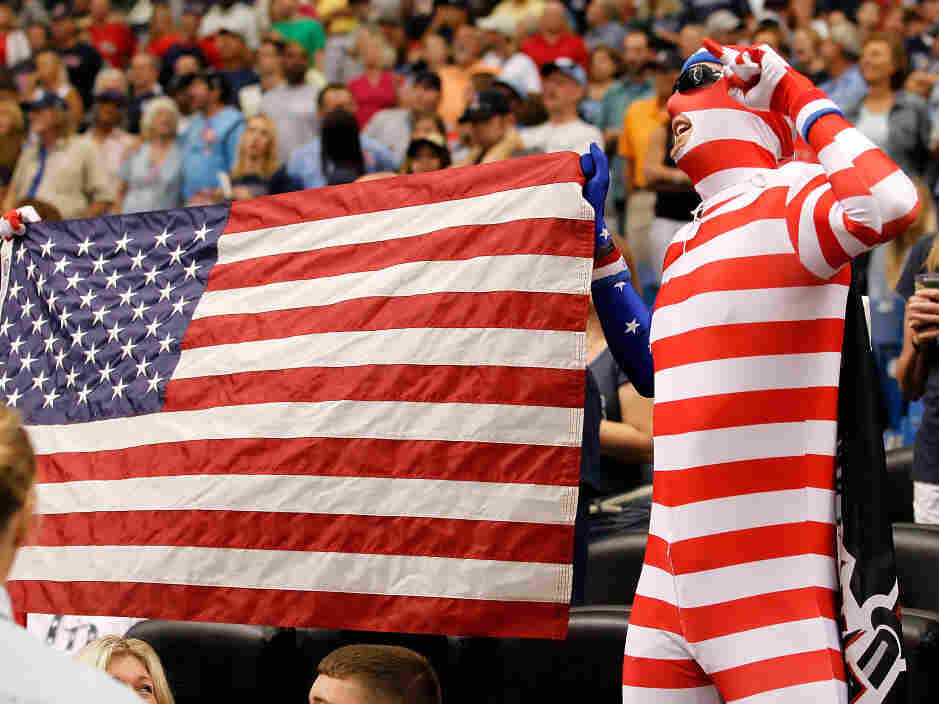 Fans of the Tampa Bay Rays celebrate during the singing of "God Bless America" during the game against the Boston Red Sox at Tropicana Field on Sept. 11 in St. Petersburg, Fla. J. Meric/Getty Images hide caption

OK. So you can't quite picture it. No sweat. It's the surrealistic setting of Bioshock: Infinite, a video game — sequel to the critically acclaimed Bioshock — scheduled for release from Irrational Games in 2012.

The storyline is imaginative, assimilating eclectic influences. But one salient characteristic is unmistakable: The pro-Uncle Sam, protectionist feel of the game reflects the mood of many present-day American nationalists.

"The nationalism thrown throughout this is so overt," says video game critic Hilary Goldstein in a preview trailer.

You don't need to fire up the Xbox 360 to know that there has been among many Americans a swell of nationalism in the years following the Sept. 11, 2001, attacks.

• Go to a baseball game where fans often croon "God Bless America" during the seventh-inning stretch.

• Check out the American flag pins on the lapels or collars of nearly every politician.

• Listen to Toby Keith's current hit Made in America and read how it inspired a Michigan kindergarten class to create an "American-made show-and-tell."

Call it what you will — American nationalism or patriotism — it is covering the country like a Wi-Fi cloud — above the fruited plain from sea to shining sea.

Where does this rising nationalism spring from? And is it a positive or a negative trait for a country? That all depends ...

A Sense of Selfhood

Nationalism flows through our lives every day, observes Lloyd Kramer, author of the recent book Nationalism in Europe and America.

And, like most "isms," Kramer says, nationalism carries with it both good and bad characteristics. "When people feel committed to larger communities or interests or to ideas of human rights and political progress, for example, nationalism can contribute to a sense of hope about the future. It can build positive personal and collective identities and a sense of selfhood in the modern world " 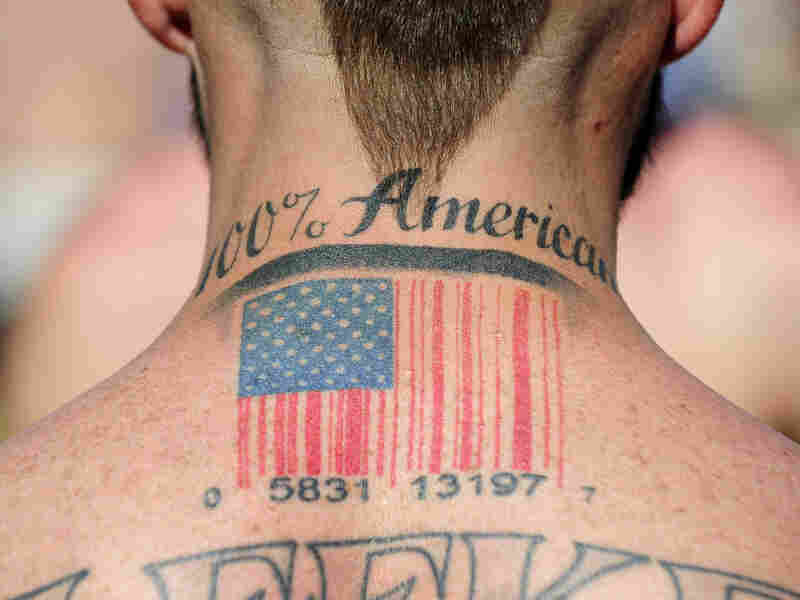 On the other hand, he says, "nationalism often encourages fears of all kinds of other people: fears of other religions or races or cultures or ethnic groups or homosexuals. This fear can be mobilized for violence and scapegoating. It can lead people to feel aggrieved and constantly at risk."

Nationalism, according to Kramer, is often in full flower on national holidays, during major sports events and at public memorials for deceased military troops. And nationalistic symbols, rituals and rhetoric are especially ramped up as the country moves toward a presidential election.

Patriotism permeates contemporary American politics. As do accusations of unpatriotic behavior. Of course, the word "patriot" is a subjective characterization, and most politicians use it as code for someone who shares their beliefs.

Americans "are a patriotic people," said Mitt Romney at the recent Republican presidential debate in Orlando. "We place our hand over our heart during the playing of the national anthem. No other people on Earth do that." So does that mean that people who don't place their hands over their hearts while the anthem is played are not patriots?

Speaking to a Tea Party gathering in New Hampshire on Labor Day weekend, possible presidential candidate Sarah Palin said, "We patriots should not focus on petty political squabbles and media game sound bites. The Tea Party has got to be focused on the broader, much more important goals of this movement — replace Obama." Does that mean that someone who supports the president of the United States is not a patriot?

From the Democratic angle, Texas Rep. Sheila Jackson Lee, speaking recently on the Tavis Smiley Show, suggested that members of the Tea Party should "stop being Tea Party people instead of patriots and Americans." Does that mean a Tea Partier cannot also be a patriot and an American?

Though the United States may have its own brand of nationalism, most countries have a strong streak of patriotic pride.

There are times when nationalism becomes more prominent on a global scale and other periods when it is displaced by other issues, says Peter Rutland, who writes the NationalismWatch blog. The last big wave was the post-Communist 1990s, when Yugoslavia became a handful of republics.

Now we are experiencing another wave, Rutland says. "The economic rise of the BRICs [Brazil, Russia, India and China] and other middle-income countries is often accompanied by nationalist assertion, China being the obvious case, also Turkey and many others."

Increased globalization, he adds, "produces a countereffect of increased national assertion, worries about the loss of identity. Then we see a new wave of democratization — starting with the color revolutions in the former Soviet Union and now the Arab spring."

He cites the book From Voting to Violence by Jack Snyder, which shows that democratization often leads "to an uptick on nationalist politics as media and political parties use nationalism as an organizing principle for the new political situation."

The Arab spring, for example, is leading to more nationalist rhetoric and possibly policy changes to follow in places like Egypt, he says. And "Turkey shows that Islamism and nationalism can go together."

After watching that ad, CNN's Carol Costello asked: "Should patriotism be a political tool?" She then pointed out that "patriotism has worked for Democrats, too, during the 2008 campaign. Vice presidential candidate Joe Biden said wealthy Americans should pay more taxes because it's time to be patriotic."

Patriotism, nationalism. Is there a difference?

Peter Rutland, a professor of government at Wesleyan University in Middletown, Conn., says that in the U.S., the word "nationalism" often has negative connotations. "So we talk instead about patriotism."

He says, "Other people are nationalists; we are patriots."

But for the sake of argument, the terms "nationalism" and "patriotism" are pretty much interchangeable, Rutland says. He studies this instinct on a global level and posts observations on his NationalismWatch blog.

Rutland, Kramer and others who track nationalism point out that U.S. nationalism has swelled since 2001. Countrywide concerns about a faltering economy and a flood of immigration only intensify the notion of nationalism.

Both liberal and conservative politicians have been adapting their language, Rutland says, "to try to appeal to the patriotic median voter."

Rutland says that in light of that quest for the patriotic center, Obama's language has been particularly striking. "If you read his speech announcing his candidacy in Springfield, Ill., or his inaugural address, you see a heavy emphasis on the common national narrative — the sacrifices of Gettysburg, the legacy of past generations, etc. — classic nationalist/patriotic imagery."

That nod toward nationalism served Obama well in the 2008 election.

It has also worked for a number of business people, such as Todd Lipscomb. Not too long ago, Lipscomb was an executive in a California tech company. He lived in and traveled through Asia and the Pacific Rim for seven years. As his American company's global business increased, Lipscomb began to worry about the folks — their jobs and financial futures — back in the U.S.

Four years ago, he resigned from his company, moved home to California and launched the website Made in USA Forever. He sells products — everything from shovels to snowshoes — that are domestically manufactured.

"Stand with us to protect America's ability to produce, create jobs, and remain a world leader," the website intones.

From his home in San Clemente, Lipscomb says "sales are surging. Conversely to the economic trends, the bad news has energized my customer base."

Customers know "they are doing something real for our economy," Lipscomb says. "Every item is made here from U.S.A. components, so from the farmer that grows the cotton through every step of the way it helps our economy and creates jobs in a virtuous circle."

There are many similar sites for domestically manufactured products, including Made in USA and the Made in America store.

Lipscomb's website offers more than 2,800 products from over 480 "mostly small, family-owned business," Lipscomb says. But he adds, "Where we are weak is in electronics."

Lipscomb has written a couple of books about his experience, including Re-Made in America: How We Can Restore Jobs, Retool Manufacturing and Compete with the World. The issue of nationalism or patriotism is not a partisan concern, he says. He has been asked to appear on Ed Shultz's progressive radio show as well as the conservative Fox & Friends national TV program.

He says his website attracts people of all stripes. "Conservatives, progressives, outdoorsmen, union members, immigrants, and many, many other groups come together on the website as Americans."

In the end, he says, "this is not a red state or blue state issue, but truly a red, white and blue one."