Accessibility links
New Republic: The Strength Of Perry's Ignorance He can walk the cowboy boot-shod walk, but can he talk the talk? The New Republic's Timothy Noah debates Rick Perry's oratory skills. 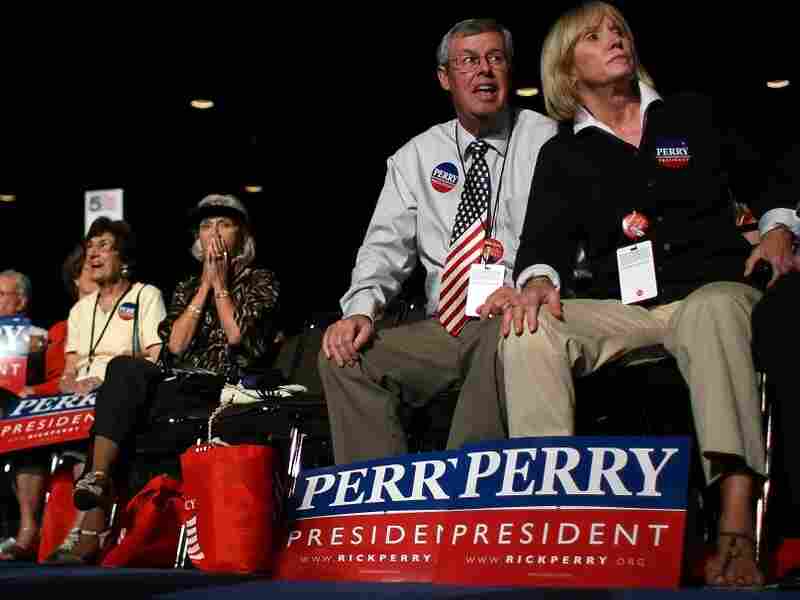 Supporters of Gov. Rick Perry wait for the results of Florida's straw poll to be announced at the Florida President 5 convention on Sept. 24, 2011 in Orlando, Florida. Candidate Herman Cain won the straw poll with 37.11% of the vote. Mark Wilson/Getty Images hide caption 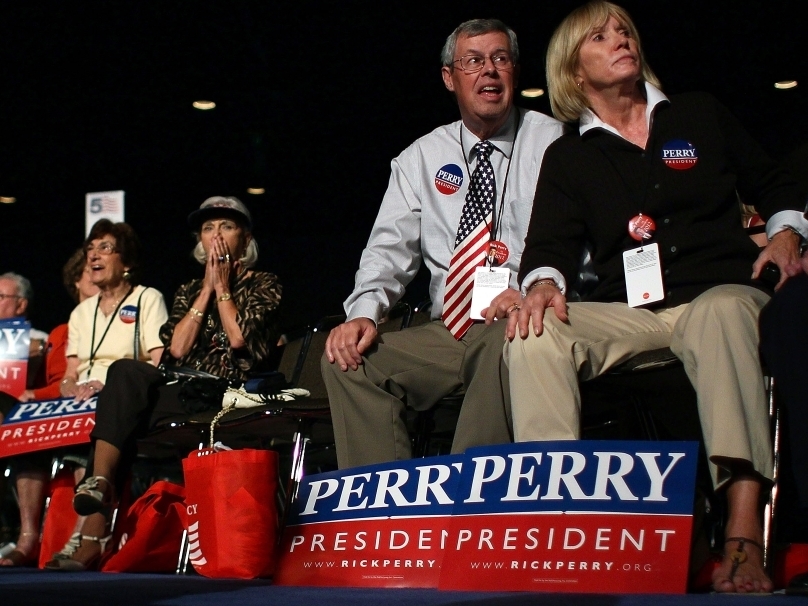 Supporters of Gov. Rick Perry wait for the results of Florida's straw poll to be announced at the Florida President 5 convention on Sept. 24, 2011 in Orlando, Florida. Candidate Herman Cain won the straw poll with 37.11% of the vote.

Timothy Noah is a senior editor of The New Republic.

"It's not who is the slickest candidate or the smoothest debater that we need to elect," Rick Perry said today at the Conservative Political Action Conference in Orlando. "We need to elect the candidate with the best record, and the best vision for this country. The current occupant of the White House can sure talk a good game, but he doesn't deliver. Matter of fact, remember President Clinton? Man, he could sell ice cubes to Eskimos. And the next day be against ice cubes! The alternative is candidates who stick to principle, stand their ground, because they believe in something."

So ... being a good debater means you're ineffectual at best, inauthentic or downright dishonest at worst. Coherence equals glibness. If I were stuck with Perry's particular skill set that's probably what I'd be saying too. But by playing up the idea that strong, silent cowpokes like himself "stick to principle, stand their ground," Perry makes it harder to back away from extremist political positions such as his stated belief that Social Security, Medicare, and the direct election of senators are all unconstitutional. Perry's opponent, Mitt Romney, has no intention of letting debate audiences forget about this.

How will Perry handle it? We got a glimpse of his strategy in an August interview with the Daily Beast's Andrew Romano:

"Q: The Constitution says that 'the Congress shall have Power To lay and collect Taxes... to provide for the... general Welfare of the United States.' But I noticed that when you quoted this section on page 116 [of Perry's book, Fed Up!], you left 'general welfare' out and put an ellipsis in its place. Progressives would say that 'general welfare' includes things like Social Security or Medicare—that it gives the government the flexibility to tackle more than just the basic responsibilities laid out explicitly in our founding document. What does 'general welfare' mean to you?

"A: I don't think our founding fathers when they were putting the term 'general welfare' in there were thinking about a federally operated program of pensions nor a federally operated program of health care. What they clearly said was that those were issues that the states need to address. Not the federal government. I stand very clear on that. From my perspective, the states could substantially better operate those programs if that's what those states decided to do.

"Q: So in your view those things fall outside of general welfare. But what falls inside of it? What did the Founders mean by 'general welfare'?

"A: I don't know if I'm going to sit here and parse down to what the Founding Fathers thought general welfare meant.

"Q: But you just said what you thought they didn't mean by general welfare. So isn't it fair to ask what they did mean? It's in the Constitution.