Accessibility links
Saving For Retirement: How Much Do You Need? The amount can be confusing and depressing, so many Americans never calculate it. Experts offer their formulas, and say you'll be far happier later if you pinch pennies now. 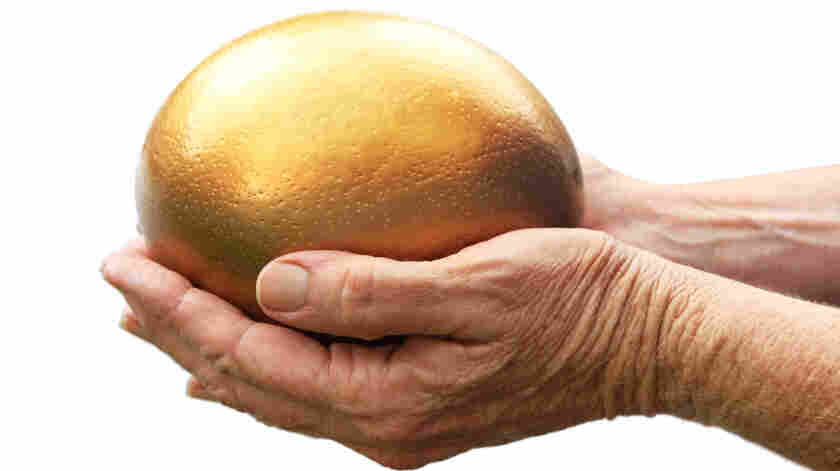 More than half of Americans are at risk of not having enough money for basic expenses in retirement, experts say. iStockphoto.com hide caption

By some counts, fewer than half of Americans have ever tried to calculate how much they'll need for retirement. And those who do? In one recent survey, half told pollsters they just guessed.

A new poll for NPR, the Robert Wood Johnson Foundation and the Harvard School of Public Health finds retirement is proving more difficult than expected for many Americans, in large part because they haven't saved enough. So we set out to ask: How much do you need?

To appreciate the answer, though, here's another question: What's the biggest threat to a good life in your golden years?

Retirement Poll: What We Found

Expectations Vs. Reality: Life, Well-Being/Happiness And Stress In Retirement

Expectations Vs. Reality: Financial Ability To Live Comfortably In Retirement

Expectations Vs. Reality: Health In Retirement

Beliefs About How Long-Term Nursing Home Care Would Be Paid

If you (or your spouse/partner) were to need care in a nursing home for three months or more, how would the majority of costs be paid?

Retired people are healthier in some communities than others. How important do you think each of the following things is in helping retired people stay healthy?

"Living too long," says Dallas Salisbury, president of the Employee Benefit Research Institute (EBRI). He tried to drive this point home with his own parents. They were in their mid-80s, as old as they ever expected to live. But he pulled out his computer to show they had a 50 percent chance of living until age 99.

"And they looked at me and just shook their heads, and said, 'You are the most depressing person we've ever met,' " he recalls.

Well, his parents did live to 94, proving Salisbury's warning not to base retirement savings on your "average" life expectancy. That means, don't fall for claims you can retire on 5 or 10 times your annual income — or investment plans based on growth rates not seen since the 1990s. Here is Salisbury's rule of thumb, and you might want to be sitting down now:

"I use something that I call the Rule of 33," he says. "You need 33 times what you want to spend in your first year of retirement."

Now, you subtract from that what you'll get from Social Security. Still, it's a daunting sum. Another way of figuring it is this: Save 15 percent of your income, every year, starting with your first job.

The later you wait to start, the greater chunk of your income you should set aside. Although on graphs he presents in congressional and media hearings, Salisbury caps that number at 25 percent, "because otherwise you would end up spending the afternoon crying." For individuals, EBRI has its own online retirement calculator.

So what does this mean for a middle-earner, making roughly $47,000? Salisbury pulls out a calculator.

"Well, I think he's right, that's what you should have," says Cindy Hounsell, president of the Women's Institute for a Secure Retirement. "But nobody's going to have that."

Hounsell points out that more than half of Americans are at risk of not having enough money for basic expenses when they retire. She offers a kinder, gentler formula for calculating a nest egg.

"I think people need to take their W-2 form, and see what did they spend [in the] last year."

From that, she says you subtract taxes, insurance premiums and other payouts. Then subtract what you'll get from Social Security and any 401(k). Again, taking that hypothetical median income, let's say this number comes out to $15,000.

That sounds a lot better. But Hounsell admits this does not account for inflation, health care, or living longer. She worries people will simply give up if they're too discouraged by the little amount they've actually saved.

"We want them to treasure it, and preserve it, and feel good about it," she says. But part of planning for retirement is also the realization that "you're going to have to cut out a lot of things."

There is good news, mostly for younger workers. More companies are now automatically enrolling them into 401(k) plans. That will have a huge payoff, says Mary Beth Franklin, of Kiplinger's Personal Finance magazine. The challenge, she says, is that younger workers are likely to change jobs a lot, allowing them to cash out their 401(k).

Resist the temptation, Franklin says, and roll the money into your new plan.

"Seventy-five percent of retirees grab those benefits at 62," says Franklin, "as soon as they can, some of them not realizing they're taking a 25 percent cut in their benefits for the rest of their life."

Mostly, Franklin and the other retirement experts all advise: Just keep saving, all you can, month in and month out. Sure, it's depressing now. But you'll thank them later.