Accessibility links
Going Round In Circles Over Traffic Fix Roundabouts can slash commute times, reduce pollution and even limit car accidents. But city planners will have to overcome public fears for the circles to thrive in the U.S. 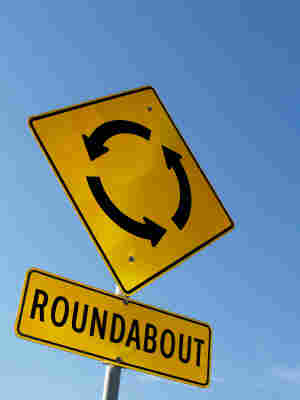 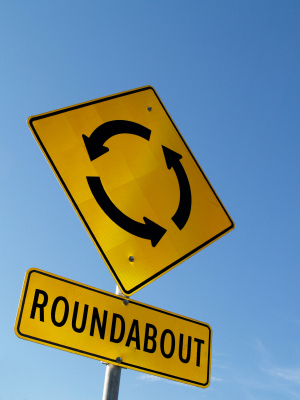 Over the past decade, the number of roundabouts in the U.S. has increased dramatically, from the low hundreds up to the thousands. Modern traffic circles can cut down on commute time and pollution. Studies have shown that they even reduce accidents. And many American cities are planning to put in more. But there are still a few roadblocks in the way of a true roundabout revolution.

Near a standard traffic circle in West Los Angeles, a nexus of car culture, NPR put up a handwritten sign that said, "Talk to a reporter about roundabouts."

Matt Perkins was the first to stop after riding around one on his bike.

"It was as good as it always is," Perkins says. "I love roundabouts."

Perkins grew up in Denmark, where there are lots of them. But Sheila Keiter and her two sons say they avoided the roundabout because they think it's too dangerous. The family even has a special name for them, Keiter says: "the blood circle."

"Because there's cars and there's gonna be a lot of blood and then you can get hit when you're trying to get there," says her son, Alon, 6.

Coming To An Intersection Near You

Roundabouts in the U.S. have been on the rise. In 2007, for example, there were about 970; in 2011, there are more than 2,000, according to Lee Rodegerdts of Kittelson and Associates, a transportation engineering and planning firm.

And soon there could be lots of roundabouts in your city. Chicago has seen a big jump; cities in Colorado have them. Soon L.A. will throw its hat in the ring and get its first modern roundabout, which means three things: the roundabout will be large, drivers will be forced to slow down as they approach the roundabout by a deflecting island, and they'll have to yield on entry. (Older-design traffic circles, meanwhile, did not meet all three of these criteria.)

NPR met Michael Hunt, a transportation engineer with the City of Los Angeles, at the junction of Cesar E. Chavez Avenue and Indiana and Lorena streets. This ragged five-leg intersection in East L.A. will be the first intersection retrofit in the city. After the street lights are ripped out and the new circle put in, cars will flow through without stopping. Hunt says there will be huge savings in emissions when cars no longer idle at a red light.

"They're coming to a stop over at Cesar Chavez. Right now they've been there for about 30 seconds," Hunt says. "You have 20 cars almost every single cycle" stopped and wasting gas at every cycle, Hunt says. "And that's off-peak hours. At peak hours, you have hundreds of vehicles, literally."

Hunt estimates that more than 100 hours of cars just sitting there wasting gas will be saved every day after the retrofit. That calculates to a reduction in tens of thousands of pounds of greenhouse gases every year.

"You can actually help move goods faster, you get people to work faster, you help the environment because there's less congestion," he continues. "It's obviously going to be safer."

But not everyone is onboard. Roundabout projects have been defeated all over the U.S. by people who think they're dangerous. Traffic engineer John Burnside has devoted his career to roundabout education and says convincing people can be tough.

"It's not about roundabouts," Burnside says. "It's about change. Nobody likes change."

Indeed, some residents who live near that traffic circle in West L.A. where NPR interviewed Perkins and Keiter still haven't adjusted.

"What is it for?" asks Isabella McNeil. "I mean, what's its purpose? What's the roundabout's purpose?"

McNeil says people just don't know how to make their way around the thing.

"Oh my gosh, I see people literally like, there's nothing there, they just keep going, and I'm stuck going, 'Uh, I think it was your turn to yield?' " she says.

As dozens of cities consider roundabouts in the coming years, engineers say they have to be installed properly. And part of that is public education. With a big, visible campaign, they say, the U.S. may just overcome one of the largest obstacles to roundabouts — the learning curve.

An earlier Web version of this story said there were more than 2,400 known roundabouts in the U.S. According to Kittelson and Associates, a transportation engineering and planning firm, there are more than 2,000.