Accessibility links
Bullfighting Alive In Spain Despite Local Bans Spain's northeast region of Catalonia held its final bullfight last weekend, after voting to ban the practice last year. But elsewhere in the country, many Spaniards say the ban is more about politics than bullfighting — and they expect the tradition to continue. 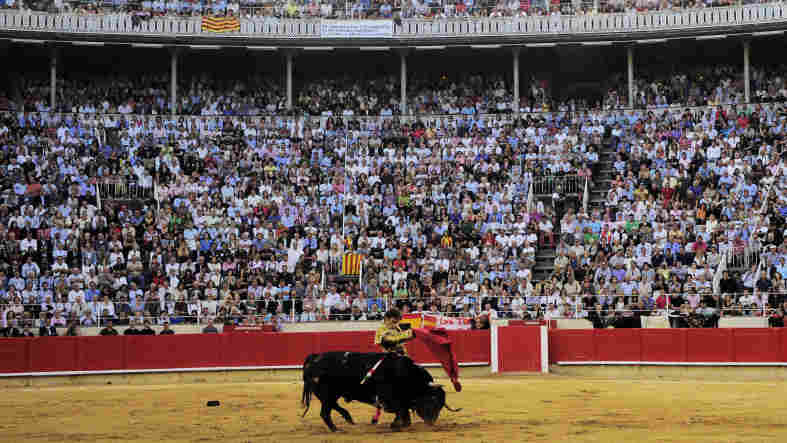 Spanish matador Jose Tomas performs Sept. 25 at the Monumental bullring in Barcelona, Spain, in the final bullfight to be held in the Spanish region of Catalonia. Lawmakers in the region voted last year to ban the practice. Manu Fernandez/AP hide caption

But it's a different story elsewhere in Spain. While relatively few Spaniards are real aficionados of bullfighting, many more see it as a national tradition and don't want it banned.

On a recent day, Antonio Gutierrez and his friends puff on cigars and shuffle dominoes on a folding table near Madrid's famed Las Ventas bullring. They're a bit suspicious of a foreigner asking about bullfights. 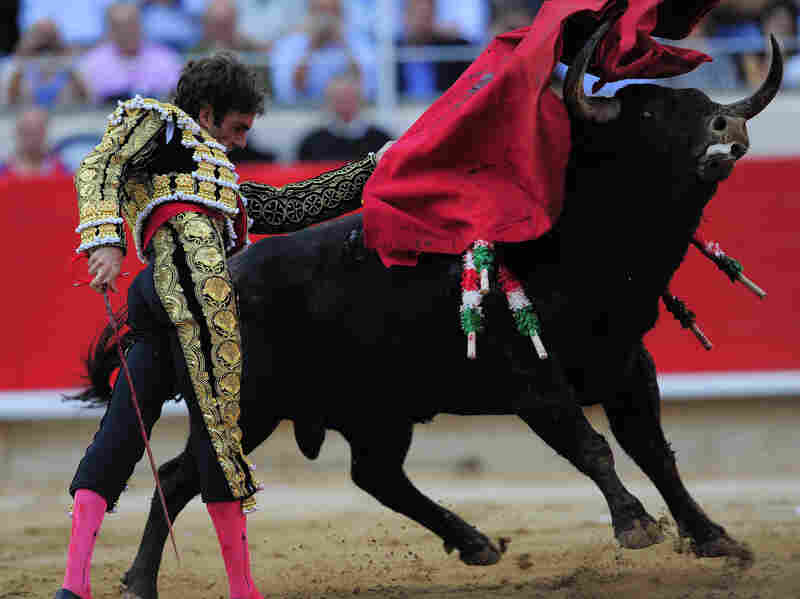 Tomas performs for the last time at the Monumental bullring in Barcelona. Since the end of the military dictatorship of Francisco Franco, Catalan nationalists have sought to cast off all things Castilian — referring to Spain's heartland. Manu Fernandez/AP hide caption 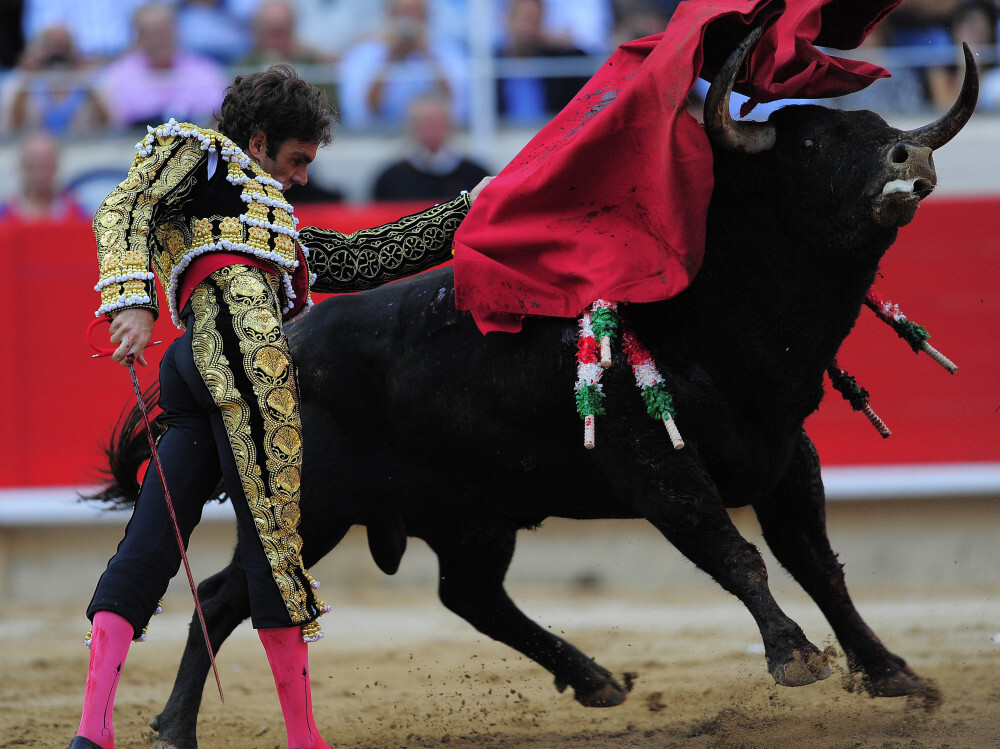 Tomas performs for the last time at the Monumental bullring in Barcelona. Since the end of the military dictatorship of Francisco Franco, Catalan nationalists have sought to cast off all things Castilian — referring to Spain's heartland.

They start cursing what they call "uppity Catalans," accusing Barcelona — the capital of Catalonia — of turning the world against bullfighting.

"Bullfighting is the history of Spain. It's the tradition in Spain. Barcelona is anti-bullfight, because it's anti-Spain," Gutierrez explains.

In other words, he thinks Catalonia's ban on bullfighting is mostly about politics and nationalism. The Catalan language and culture were repressed during the nearly 40-year military dictatorship of Francisco Franco.

Since democracy, Catalan nationalists have sought to cast off all things Castilian — referring to Spain's central, and more conservative, heartland.

But bullfighting is alive and well in Madrid. Ionela Olteanu gives tours at the Las Ventas ring.

"For us, it's an art. It's combination of an artistic part and a technical part. And it's very important, this tradition," Olteanu says.

Bullfighting on foot began as a peasant game and morphed into something regal — a source of national pride, says Ricardo Perez, cuddling with his girlfriend on a bench near the bullring. It's what he was raised with — even if it is a bit bloody, he says. He respects it and thinks it should not be banned.

"I don't like that people kill bulls, but I respect it. I think it should be legal," Perez says.

It's true that attendance at bullfights is down nationwide — from 2,622 in 2007 to 1,724 in 2010, a drop of about one-third. Alexander Fiske-Harrison is a British aficionado who writes about bullfighting. Speaking from his home in London, he blames Spain's economic crisis for bullfighting's decline.

For us, [bullfighting is] an art. It's combination of an artistic part and a technical part. And it's very important, this tradition.

The bad economy even affects the quality of bulls that breeders bring to the ring.

Paco Mateo is a black-clad, chain-smoking writer. With his dark beard, he seems to be channeling another famous bullfighting writer, Ernest Hemingway, as he sits brooding at a cafe near the Plaza de Toros.

"In the world of bullfighting, there's much corruption, he says. The people killing the bulls aren't the fighters, it's those who are trying to save money because of the crisis, he says, adding that the companies are rotting the game.

When the bulls are weak or listless, and the matador has to goad them into fighting — that, he says, is when the sport looks most cruel.

Many younger Spaniards, like Elisabeth Barcelo, don't see any romance in bullfighting.

"Bulls are not aware of what they do, but people are. So I don't like it. It's torturing an animal. It doesn't make any sense to me," she says.

Barcelo leans up against a bus stop plastered with an Armani ad. The hunky model on the poster is a famous bullfighter. And that's the paradox of bullfighting in modern Spain: The younger generation calls it murder, but still sees matadors as style icons.

The British aficionado, Fiske-Harrison, trained as a bullfighter himself.

"I think there will be an ongoing conflict between the animal rights and animal welfare lobby on the one side, and the pro-bullfighting lobby on the other. It's very hard to see it actually dying out completely, though."

Meanwhile, Madrid's bullring hosts half a dozen fights this weekend. Out of 24,000 seats, 20,000 tickets have already been sold.