Accessibility links
'Underwear Bomber' To Act As Own Lawyer When prospective jurors file into a Detroit courthouse next week for the start of a major terrorism trial, all eyes will be on the defendant, Umar Farouk Abdulmutallab. Best known as the "underwear bomber," he plans to represent himself in court. But his behavior before the trial has raised questions about how that will work. 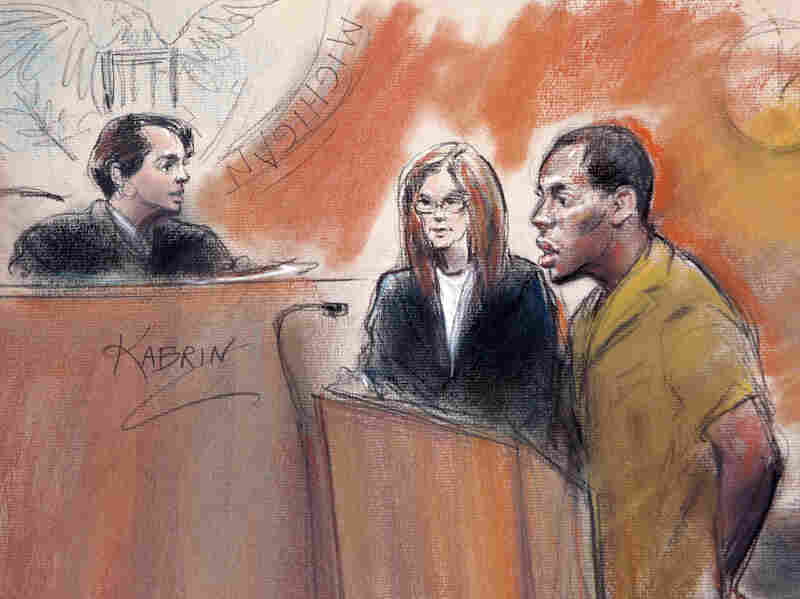 In this artist rendering, Umar Farouk Abdulmutallab stands with his attorney Miriam Siefer before U.S. District Judge Nancy Edmunds in federal court in Detroit, Sept. 13, 2010. Abdulmutallab, the Nigerian man charged with trying to blow up an Amsterdam-to-Detroit flight on Christmas in 2009, fired his lawyers and is now representing himself. Carole Kabrin/AP hide caption 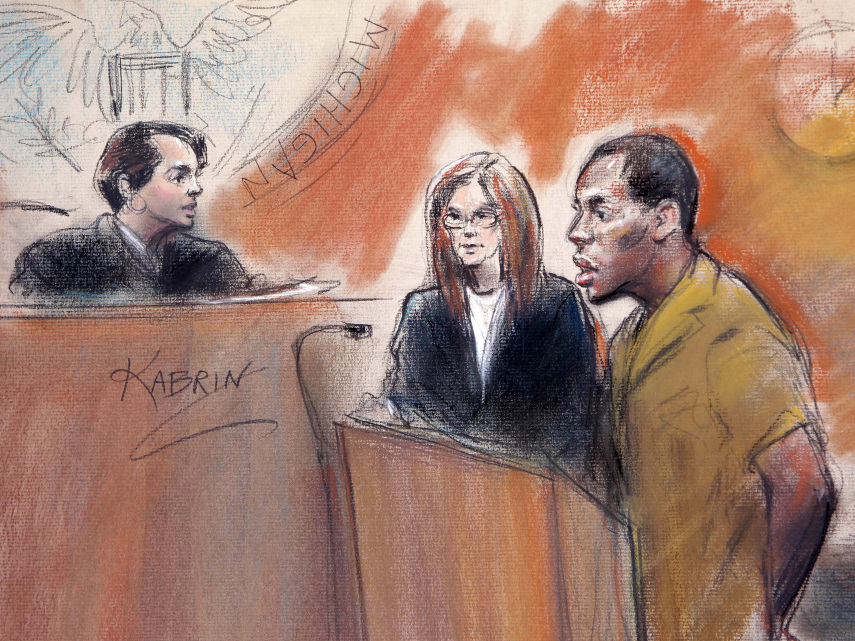 In this artist rendering, Umar Farouk Abdulmutallab stands with his attorney Miriam Siefer before U.S. District Judge Nancy Edmunds in federal court in Detroit, Sept. 13, 2010. Abdulmutallab, the Nigerian man charged with trying to blow up an Amsterdam-to-Detroit flight on Christmas in 2009, fired his lawyers and is now representing himself.

When prospective jurors file into a Detroit courthouse next week for the start of a major terrorism trial, all eyes will be on the defendant, Umar Farouk Abdulmutallab. The young man from Nigeria may be best known for allegedly trying to detonate explosives hidden in his underwear on a Northwest Airlines flight on Christmas Day 2009. Lately, his decision to fire his lawyers and defend himself is putting him back in the spotlight all over again.

In a 1975 case, the U.S. Supreme Court ruled that a defendant's right to represent himself is preserved in the U.S. Constitution.

"Defendants had the absolute right under the Constitution to represent themselves, if they wanted to," says Jonathan Shapiro, a Virginia defense lawyer who has handled criminal cases for nearly three decades.

That doesn't mean the process is easy, as the underwear bomber case shows. Abdulmuttallab has told U.S. District Judge Nancy Edmunds that he wants to give the opening statement and closing argument himself. But his behavior before the trial has raised questions about how that will work.

For example, last month at a court proceeding, Abdulmutallab hollered "Osama's alive!" and refused to stand up for the judge. The judge found that Abdulmutallab understands the proceedings and knowingly waived his right to a lawyer — all that matters when evaluating whether a defendant can represent himself in court.

Just in case, Edmunds has followed standard procedure and asked a lawyer to stand by during the trial to help by making arguments or answering legal questions.

That lawyer, Anthony Chambers, didn't return NPR's calls. So we found another attorney who has been in that spot before.

"It's like having a front row seat to a train wreck, every time," says Ed McMahon, a defense lawyer in Virginia for more than 20 years. Defendants are "not trained in how to examine witnesses or how to put on cases so inevitably it's just going to blow up."

That's what happened five years ago, when McMahon acted as standby lawyer to accused al-Qaida member Zacarias Moussaoui. After Moussaoui burst out with profanity and lashed out at the judge in court papers, the judge asked McMahon to take over the case. But the trouble kept coming, McMahon says.

"As soon as a new jury pool would walk in he would stand up and say, 'These are not my lawyers; God bless Osama bin Laden; I'm going to kill all of you'; ... things like that," McMahon says. 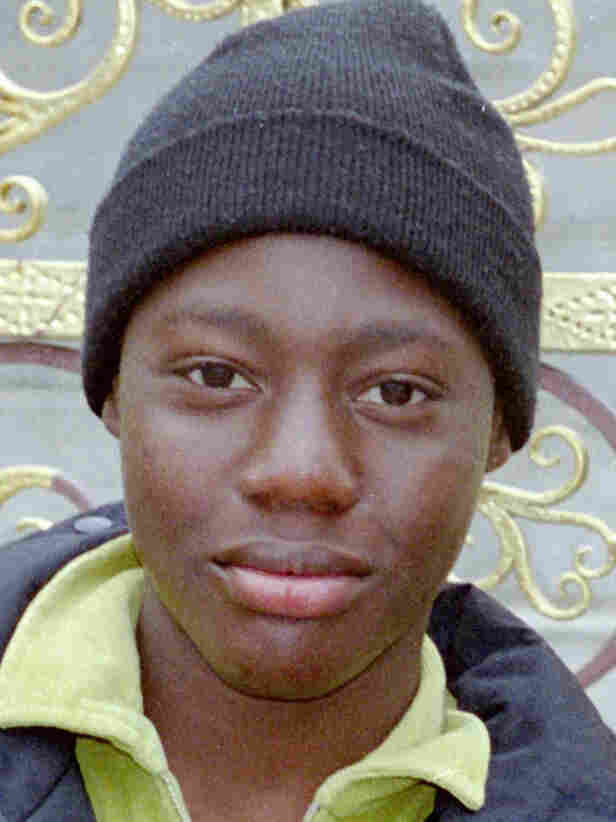 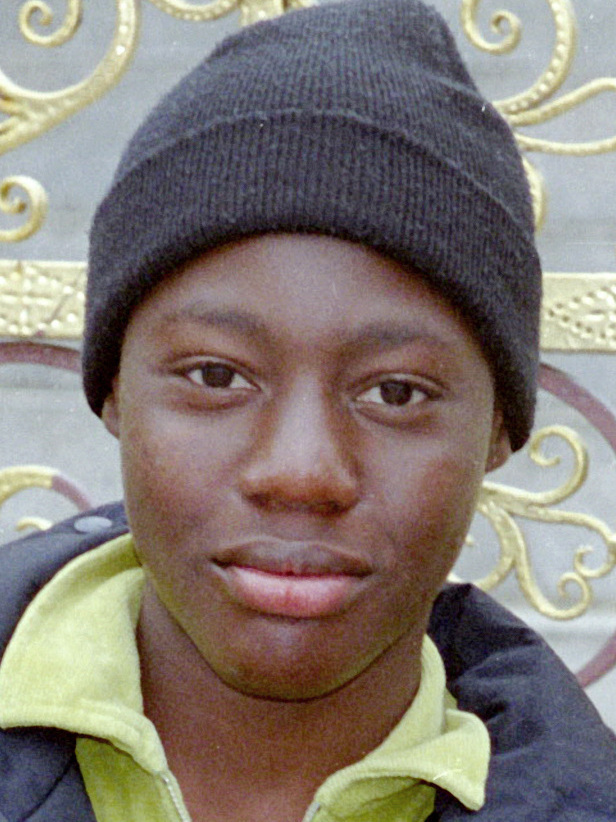 An undated photo of Umar Farouk Abdulmutallab posing in London.

And that's not the worst of it. Shapiro says he spent months getting ready to defend accused D.C. sniper John Allen Muhammad. Then came a surprise.

"Mr. Muhammad informed the court on the day of opening statements that he was going to represent himself," Shapiro says.

And the judge, citing the Supreme Court precedent, let him do it. Problem was, Shapiro says, "the commonwealth's very first witness was an expert who as it turned out provided the linchpin for their entire theory." And Muhammad didn't have the legal or technical skills to do a proper cross-examination.

Shapiro and his law partner took hold of the steering wheel again after a couple of days, but he says the damage was done. Muhammad was found guilty and was put to death.

Longtime defense lawyer Barry Boss says there's a common issue in many of these cases. "The people who are most often in the situation of insisting on representing themselves are people who suffer from some sort of serious mental illness, so they're the people really who are least able to defend themselves and protect themselves," Boss says.

Often, Boss says, that illness involves grandiosity, meaning the person thinks he's more important and more qualified than he is. And he says there's usually another complication in cases where defendants represent themselves.

"The case is going to take a lot longer, because everybody will bend over backwards to make sure the defendant is going to get a fair trial, knowing that the defendant really isn't capable of giving himself one," he adds.

In some cases, like Abdulmutallab's, judges issue guidelines for how things will work weeks ahead of the trial: describing where the standby lawyer can sit in the courtroom; what kind of help the lawyer can offer; and instructing Abdulmutallab to let the judge know a day ahead of time which witnesses he will question.

But when it comes to defendants who want to represent themselves, lawyers say, even the best-laid plans often fall by the wayside.

"These cases are difficult without that overlay and when you add that into it, there's no sleeping at night, I can tell you that," Shapiro says.