Accessibility links
Movie Review - 'Tucker & Dale Vs. Evil' - Deliver(ance) Us, Y'all Two harmless country boys are mistaken for serial killers by a crew of college students in Eli Craig's raucously bloody horror comedy, which plays genre expectations off each other to hilarious effect. 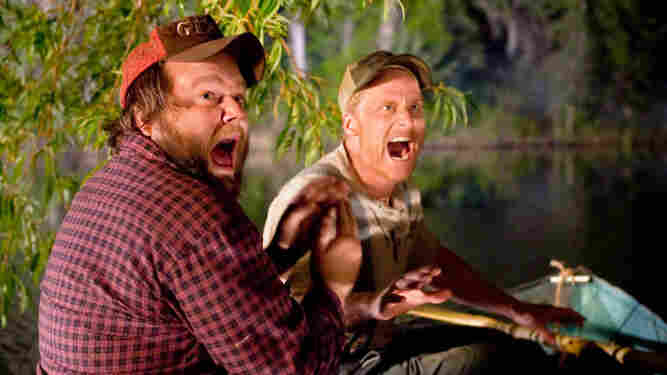 Grating Expectations: Dale (Tyler Labine, left) and Tucker (Alan Tudyk) are two West Virginia buddies who just want to fix up their fishing shack — so naturally, a pack of college-age campers turn up and take them for psychopaths. Dan Power/Magnolia Pictures hide caption

'Just Talk To Her'

'Your Friends Are Here'

'Run For Your Lives'

Films that use rural isolation to fuel their scares take it as a given that there's something not quite right about the folks who populate the backwoods. The moment the antagonists of The Texas Chainsaw Massacre or Deliverance or The Hills Have Eyes hit the screen, they're identifiable on sight as an unknown "other" to be feared.

But what if that banjo were just a banjo? What if that dirty, unshaven, thickly accented mountain man driving around the beat-up pickup truck with guns and sharp farming implements in the back were just a normal guy? Rationally, it stands to reason that he probably is. For a horror movie, though, that's a genre-busting notion, and it's a reversal that Tucker & Dale vs. Evil uses to fantastic comedic effect.

The film opens with two familiar sequences. The first scene is a found-footage-style video of an intrepid reporter leading her cameraman into a dangerous-looking old building where something awful has happened. That popular modern horror trope is followed immediately by a backtrack to three days before, as a group of rowdy, attractive college kids drive into West Virginia for a weekend camping trip. The campers get a little freaked out by a couple of scruffy-looking locals who pass them on the road — and sometime during the next reel, in any standard horror film, we'd expect that pair to start eviscerating the group one by one.

But writer-director Eli Craig quickly changes perspectives, and we're introduced to Tucker (Alan Tudyk) and Dale (Tyler Labine), just some proverbial good ol' boys, never meanin' no harm. They're best buddies on their way to a run-down cabin in the woods that they just bought, intending to fix it up for the occasional fishing getaway. The college kids set up camp just across the lake, and it's clear that the two groups are destined to not keep their culturally prescribed distance from one another.

Dale has already developed a crush on one of them, Allison (Katrina Bowden), after a hilariously awkward encounter in a convenience-store parking lot, where his attempts at casual conversation make him seem like a psychopath. When she has a night swimming accident that requires Tucker and Dale to come to her rescue, her friends confuse the sight of them dragging her unconscious body into their boat for something else entirely. 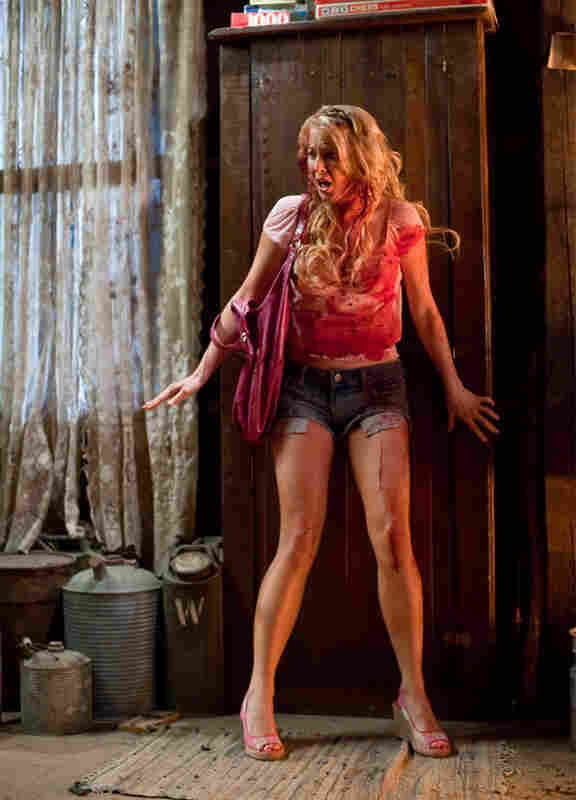 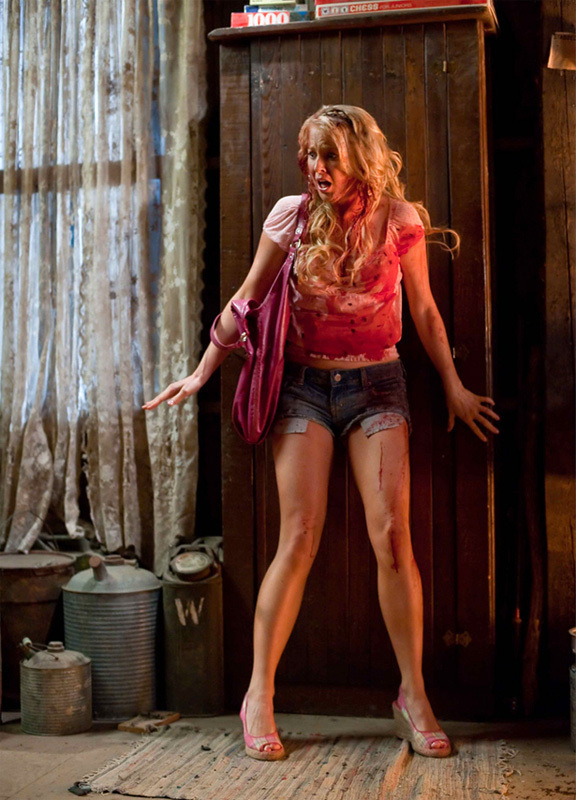 Bloody Mess: Chloe (Chelan Simmons) is one of a clueless citified klatch whose general haplessness keeps getting people killed.

A macabre comedy of errors follows, as a series of unfortunate (and deadly) events fuel the campers' assumptions that Tucker and Dale are sadistic murderous hillbillies, while the well-intentioned pair are mostly just confused. The comedy is broad, but Tudyk and Labine do well in a tough assignment, never stooping to the easy, overt slack-jawed yokel caricatures that might have laced any laughter at their foibles with guilt.

Craig's film has more unlikely coincidences and miscommunications than an entire season's worth of Three's Company episodes, and it telegraphs its gags just as plainly. But he manages to make it work through a strange alchemy by which two genres that depend on surprise for their effectiveness — horror and comedy — end up benefiting, oddly enough, from seeing each death or laugh coming just before it arrives. You may know as soon as you see Tucker feeding branches into a wood chipper that a college kid is going to end up passing through its maw, but the way in which it happens still elicits both the desired laughs and mild disgust.

And while the campers' characterizations occasionally lack depth, in this satirical environment it feels fully permissible — they're no more lightweight than the characters they're parodying. They exist here, as in any Friday the 13th movie, as bodies to pile up as the story moves along. In that sense, the film plays by genre rules — explicit gore included — even as it turns them on their severed head.