Accessibility links
German Lawmakers Pass Expanded Euro Bailout Fund The global financial community has been looking to Europe to act decisively with its debt crisis. German political leaders praised the 523-85 parliamentary vote as a victory for Europe and an important step toward solving the sovereign debt crisis. But most economists say the bailout fund needs to be even larger and stronger. 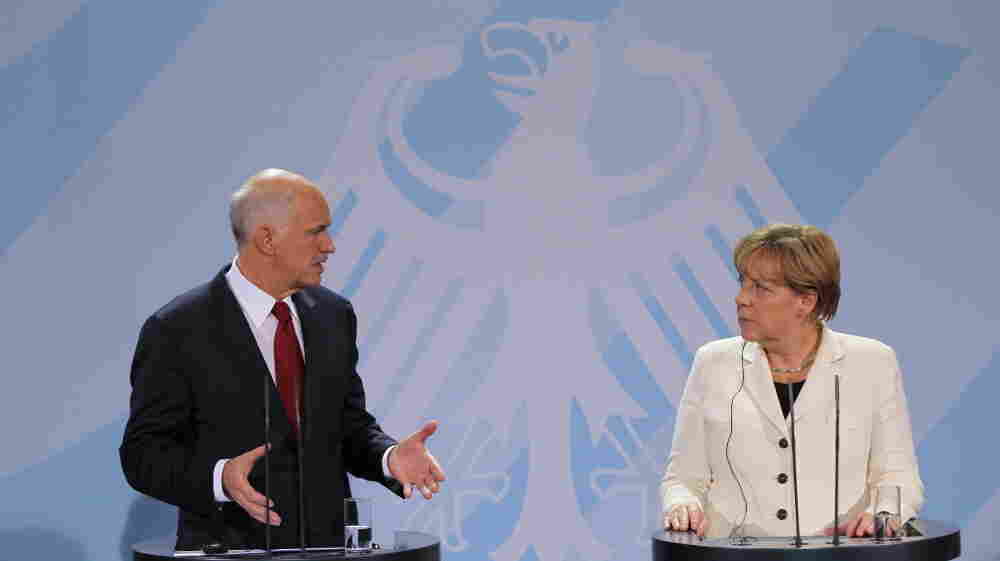 Germany's parliament approved a plan Thursday to expand the power of a European bailout fund for troubled countries that use the euro.

The Bundestag, or lower house, passed the bill 523-85 in a vote considered one of the biggest in Chancellor Angela Merkel's career.

Foreign Minister Guido Westerwelle welcomed the result, saying, "This signals to our European partners that you can rely on Germany."

The measure boosts the lending capacity of the European Financial Stability Facility, or EFSF, to 440 billion euros (about $600 billion). It also increases the fund's authority to buy government bonds of troubled eurozone countries and lend money to governments before they get into deeper financial trouble, among other things.

But most economists are already saying that a far bigger fund — perhaps as large as $2 trillion or $3 trillion — and even stronger powers are needed to prevent debt turmoil from spreading across Europe and hammering the banking sector.

Six more parliaments in the eurozone still need to approve the bailout changes, including Slovakia, which is not scheduled to vote on it until late October. (Cyprus and Estonia passed similar measures Thursday.)

German officials said Thursday's vote sends a strong message that Europe is taking decisive action to stabilize and preserve the eurozone. But analysts believe Europe will have to leverage the fund's power by partnering more with the European Central Bank or taking other steps. Peter Altmaier, chief whip of Merkel's ruling center-right Christian Democratic Union, said that's not currently on the table.

"All other further decisions will be taken on a step-by-step basis," he said. "And it would be more than premature to table decisions like this leverage issue that we cannot judge appropriate for the time being. We will tackle the next problems as they come, but not now."

The risks now are approaching what we had in 2008, and particularly in Europe, urgent action is needed.

Before the vote, the leader of the Free Democrats, part of Merkel's governing coalition, appealed to fellow parliamentarians to vote not along party lines, but with a unified Europe in mind. Economics Minister Phillip Rosler also stressed that only a "stable, unified Europe" can win back people's trust in politics.

"Politics are no longer negotiating; they are being driven by the rating agencies — thumbs up and thumbs down," he said. "You and your government, Chancellor Merkel, lack the most important political quality in these times of danger: trust."

Lawmakers from all parties were united in calling for greater parliamentary participation in regard to the EFSF. Earlier this month, Germany's high court ruled that future government decisions on the fund will have to be cleared at least by a parliamentary committee before a full vote is taken.

German Finance Minister Wolfgang Schauble told Deutschlandfunk radio Thursday that the EFSF must be used as efficiently as possible, emphasizing that "the level of liability cannot be changed without a new Bundestag decision." Asked whether it is conceivable that parliament will one day soon discuss credit-leveraging, he said, "No one knows what the future will bring, but it is not conceivable that any decisions are taken by anyone but the German parliament."

The financial world has strongly criticized Merkel and fellow European leaders for what's been described as cautious, reactive leadership during this crisis.

Senior officials in the U.S., Japan and elsewhere are urging Germany and France to move more decisively. The Americans and others are urging Europe to create a safety net big enough to prevent Greece's debt woes from sparking a new global downturn.

Harvard economics professor and author Ken Rogoff says the risks are real and that a renewed sense of urgency is certainly needed.

"The risks now are approaching what we had in 2008, and particularly in Europe, urgent action is needed," he said. "They seem to be just waiting for things to unfold, for a disorderly default to unfold and a cascade of bank panics. I'm afraid this is a very nervous moment. And that needs to be communicated. Not just to leaders but to the public — especially in Germany."

Some Germans Have Mixed Feelings

Germans remain strongly supportive of European integration. But they worry that the end game involves the German taxpayer footing the bill for its fiscally imprudent neighbors.

"I'm really of two minds," said Martin Wortmann, a 68-year-old retiree from northwest Germany who was strolling with his wife near the historic Reichstag on a sun-filled Berlin afternoon. "That it has come this far is dreadful. We should have dealt with this much sooner. The situation is now so out of hand that we're being held ransom by the markets and are forced to do something. On the other hand, Germany is partly to blame with its excessive trade imbalance, and that is the heart of the problem, the imbalance within this monetary union among individual countries."

The libertarian, pro-business Free Democrats have seen their popularity plummet to historic lows, in part because of stances taken during the debt crisis that many voters have seen as anti-Europe.

Some party members have called for Greece to default and leave the eurozone. Frank Schaeffler said he and other FDP "rebels" are realists, while Merkel "is a euro romantic."

"Greece has no chance of getting out of this crisis if it stays within the eurozone," he said. "The markets know this — the news is all over town. It would be in the interest of everyone — both Greece and the rest of Europe — if Greece were to temporarily leave the eurozone, reintroduce the drachma, devaluate it. And then we can talk about how to support their banking system so as not to create a domino effect."